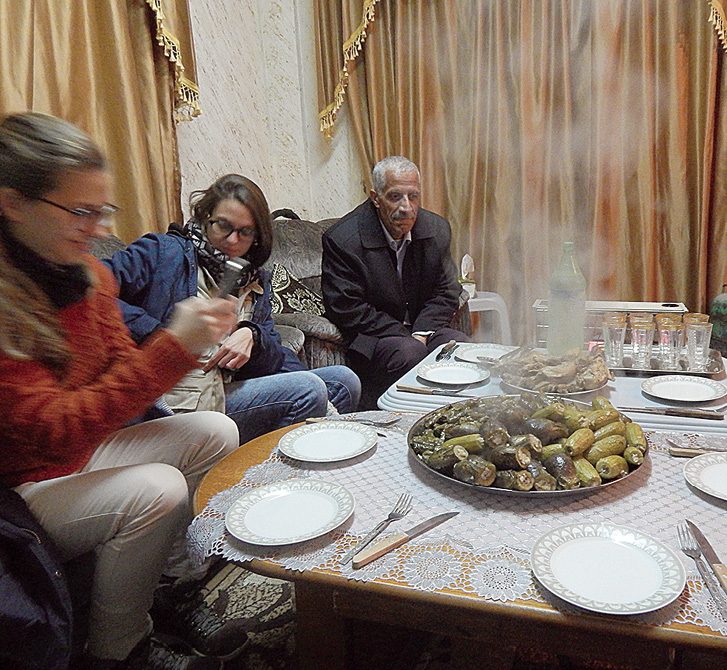 Many Middle Eastern dwellings do not have central heating, hence we are bundled up in our winter coats as we enjoyed a Christmas dinner at the home of our taxi driver. | PETER FERGUS-MOORE

One December morning in 2013, I woke up in Bethlehem, Palestine. Outside, I could hear the usual heavy bus and truck traffic as our house lay beside the vehicle checkpoint road that runs between Bethlehem and Jerusalem. Looking out the window, I saw someone up a ladder set against the light pole across the street, affixing a sizable Christmas decoration and stringing lights. Christmas was three weeks away.

The four other internationals and I prepared for a more or less typical day, Christmas notwithstanding. We donned our distinctive vests and proceeded to the checkpoints to monitor how Palestinians, people under occupation on their way to work in Jerusalem, were being treated by the Israeli military. We were among some 35 human rights monitors, known as Ecumenical Accompaniers, serving in various locations in the occupied territories. My wife Joyce was stationed in East Jerusalem, while I was in Bethlehem.

It’s fair to say that Christmas is a big deal in the Middle East. After all, the state of Israel and the occupied territories of Palestine are often referred to as the Holy Land, and the Christmas story arguably begins in Bethlehem. While the vehicular traffic on our road was fairly heavy most of the time, it was bumper to bumper with tourist traffic toward Christmas. Tourism is complicated by the military occupation of Palestine by the state of Israel, but most times, that does not stem the flood of religious tourists. Of course, that was the reality in pre-pandemic December, 2013.

Christmas in the Middle East is understandably very different from the habitual Christmas celebrations here in North America. We noted few Christmas trees and decorations, though churches and many hotels did feature crèches. Obviously, there was no familiar pre-Christmas shopping advertising on local media. No carols and no Elvis Presley or Bing Crosby crooning Christmas songs over loudspeakers.

Still, there were celebrations. In early December, we were treated by our taxi drivers (whom we relied on for transportation during our monitoring work) to a Christmas dinner in one of their homes. Middle Eastern dwellings are generally not centrally heated, so we all kept our winter coats on as we were served a delicious Palestinian meal. It was a magical time, for which I will always feel a sense of gratitude.

On Christmas Eve, all 35 of us internationals gathered to meet up in Bethlehem from our various placements in Palestine. We were to enjoy a rare two-day holiday from our work. We, the Bethlehem team, offered an open house for snacks and refreshments. It was great to reunite with the people with whom we had trained and worked through our stay. By prior arrangement, we were all to be lodged for Christmas Eve in the Bethlehem Inn, just down the street from our placement house. My wife Joyce and I were to be together for a day and a half, a cause for our own personal celebration.

That evening, we all ate a Christmas dinner at a local restaurant with a Palestinian cuisine: salads and hummus, lentil and rice dishes, falafels, chicken, mutton, and shawarmas for those who wanted them. Afterwards, we all trudged the hilly kilometre or so up a street off Manger Square to the Lutheran Christmas Church. It seemed that half the Christian population of the area was there, including people we had met in the course of our daily volunteer activities. The service was wonderful, featuring a delightful Palestinian youth orchestra playing lute-like ouds and violins, as well as scriptural readings by various clergy in Arabic and English. Each one present had been given a long taper; all were lit, providing a special moment of peace and hope in a troubled land. We got to take them back to our placements with us afterwards.

The following morning, after breakfast, about 20 of us gathered in the hotel lobby for our own impromptu Christmas Day service. Afterwards, we checked out of the hotel and returned to our placements.

Boxing Day was a working day for us in Bethlehem. We got up at 4:30 a.m. as usual to monitor the nearby pedestrian checkpoint, hoping that for a change, it would be operated smoothly. A more or less normal checkpoint day meant sudden, lengthy stoppages of the checkpoint turnstile, bullying by Israeli guards, crowds of Palestinians desperate to get to their workplaces. To our astonishment, the checkpoint operated with previously-unseen efficiency and humanity. We were finished hours early, and returned to our house to sleep.

And that was our Christmas in Bethlehem. 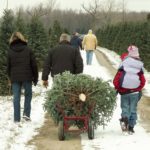 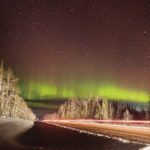