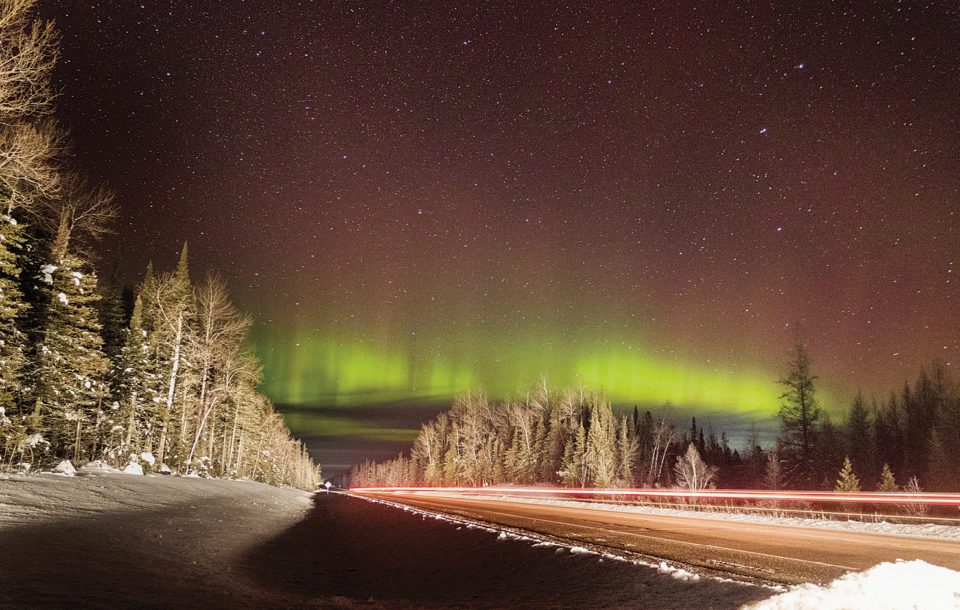 Aurora borealis is a phenomenon caused by the interaction of solar wind with Earth’s magnetic field and atmosphere. | LEVI JOHNSON

I was working at an outfitter on the Gunflint Trail when I saw the northern lights for the first time.

I saw the famous colors on a night towards the end of September. Conditions were perfect for aurora borealis—a new moon, a high Kp-index, a clear night, and I could sleep-in the next morning. All important factors when it comes to enjoying the northern lights.

That night, I rolled out my sleeping bag on the outfitter’s dock and set alarms for midnight, 2 a.m. and 4 a.m. so that I could open my eyes and see what was above throughout the darkest hours of the night.

When I fell asleep around 10 p.m. the sky was still. The air was crisp and smelled of fall, and despite the lack of shimmering green the sky was alive with the mysteries of stars. Starlight shown bright through the darkness of space. It felt close enough to touch.

At midnight my alarm went off and I opened my eyes. On the northern horizon I could see a faint shimmering white cloud. Was that them? I watched for a few minutes before drifting back to sleep.

At 2 a.m. my alarm went off and, again, I opened my eyes. This time, there was no mistaking the scene playing out above my head.

A solid green wall danced on the horizon while faded flames flicked past the tops of the white pines behind me. The night sky burned on a backdrop of one of the most impressive displays of stars that I had ever seen.

The lake was dead calm and reflected everything happening above like a giant mirror. I paddled a short distance out and felt as if I was floating in space.

Experiencing the northern lights is rarely an accident. It takes intention—knowing when and where to look—and, of course, a little bit of luck.

Aurora borealis (or northern lights) is a phenomenon caused by the interaction of solar wind with Earth’s magnetic field and atmosphere. The northern lights are, in a sense, always dancing above our heads, they just aren’t always visible.

The Kp-index is used to rate global geomagnetic activity for a three-hour period on a scale of zero to nine, and because of this it is a great way to predict how active the northern lights might be on any given night. A Kp of five or more means that there is a good chance that, if conditions are right, the northern lights will make an appearance.

No matter how active the solar wind is predicted to be, however, if the sky is too bright the northern lights will be impossible to see. Light pollution can wash out the spectacle; even a full moon is often too bright for the borealis to break through.

Thankfully, we have some of the darkest skies in the world on the North Shore.

Since my first encounter with the northern lights up the Gunflint Trail, I have seen them a handful of times along the North Shore in places like along County Road 7, on the south shore of Sawbill Lake, and from the top of the White Sky Rock overlook.

You don’t need to be in the BWCAW to see the show, you just need to be somewhere with a clear view of the north and away from lights on a cloudless, moonless night. An excellent map of good places to go looking for the northern lights can be found on the Visit Cook County website at: visitcookcounty.com/adventures/northern-lights.

Of course, there is much more than just the northern lights to see in a night sky as wonderfully dark as ours.

The stars and distant galaxies visible on clear nights along the shore are always spectacular, but every year throughout most of July and August the Perseids meteor shower puts on a nighttime-spectacle of shooting stars that is particularly unforgettable.

The lesser-known Leonid meteor shower that takes place in November is also worth staying up for, but, remember, you can spot a shooting star any time during the year—you just have to get out and look.

Winter nights are cold, but they are also long and dark. Stargazing is often underappreciated in the winter, yet it is more than enough reason to bundle up and brave the outside-cold.

Night cross-country skiing is another great way to appreciate the night sky. There is nothing quite like skiing down Onion River Road by the light of the stars—the sound of swishing snow underfoot. Pure magic.

The annual Dark Sky Festival in Cook County will be taking place this year Dec. 9-11 with special events taking place at the Gunflint Lodge on the 9th and a “Turn Off the Lights” event in Grand Marais on the 10th. 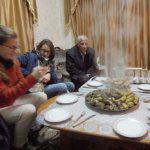 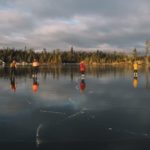