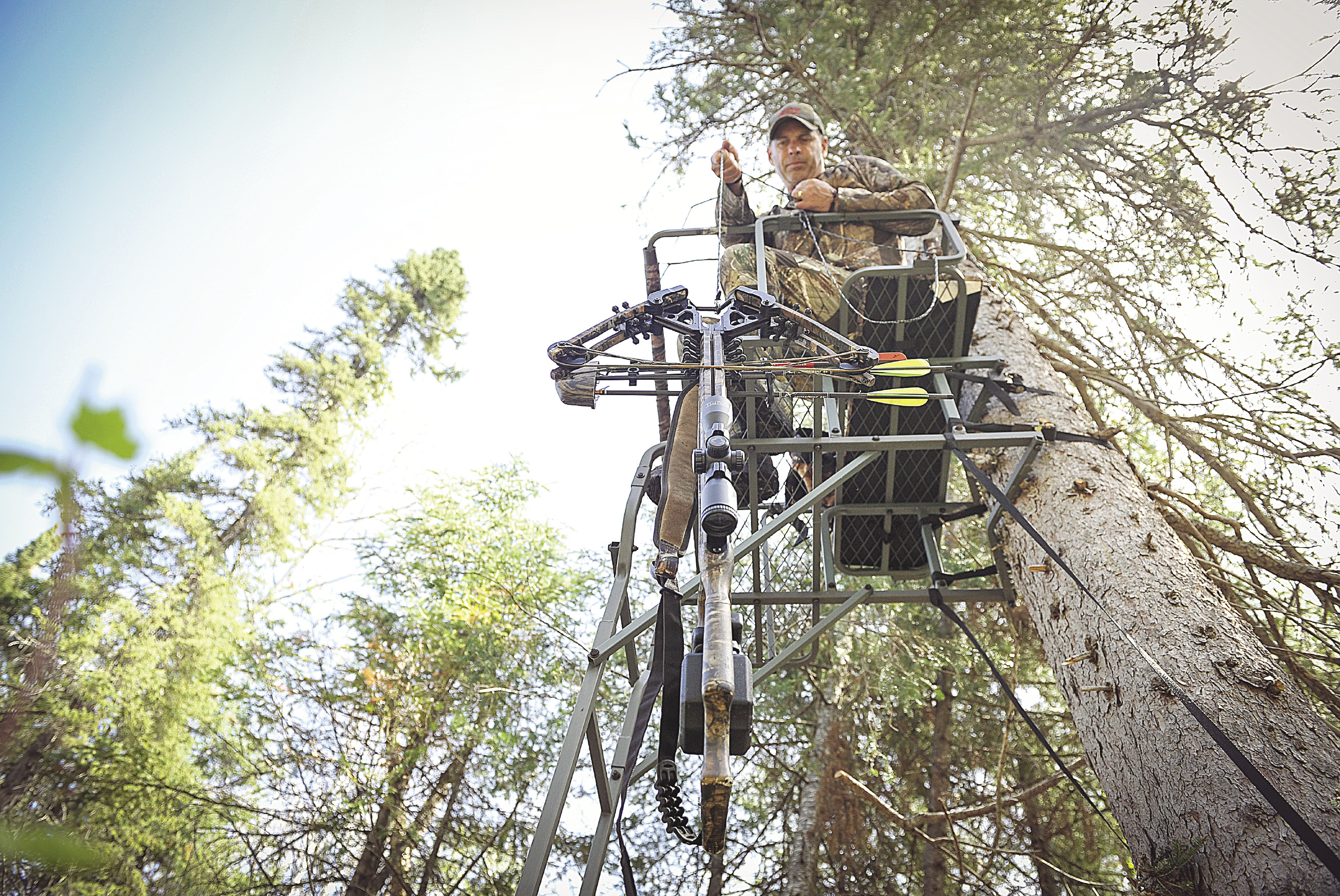 Gord Ellis lifts his crossbow to his stand. | KAIJA KOLEHMAINEN

The crossbow is both a deadly hunting tool and a contraption that has inspired controversy among people who prefer a traditional bow. The crossbow is a tool with its roots in ancient medieval history, yet modern forms are highly efficient. Regulations around its use vary from state to state and province to province. In Ontario, a crossbow is not regulated any differently than a compound or traditional bow and can be used during the regular archery season. They have become very popular, and there are a wide variety of companies now competing for the crossbow hunters’ attention.

My first brush with a crossbow took place nearly 20 years ago, at an Outdoor Writers of Canada conference. A company called Excalibur had set up a shooting range during a breakout day. To that point, I’d only seen a crossbow, but had never held one. The owner of the company was there and walked me through the finer points of loading, aiming and shooting a crossbow. The one I was handed was large, somewhat heavy and fitted with a scope. Loading it was interesting as you had to step on the front of the crossbow and pull the string back to a cocked position with a rope. I shouldered the thing, put my finger on the trigger, put the crosshairs on the centre of a target and squeezed. In my mind, pulling a trigger was always followed by a loud crack, so it was a pleasant surprise to only hear the hiss of the string releasing and the bolt flying.

My aim was true and the arrow hit the centre of the bullseye. A second shot was nearly as accurate. So, at 20 yards I was good. We stepped back to 30 yards and I was told to use a pin inside the scope to compensate for drop. That worked too. I was shooting accurately for my first time, which is one of the selling points of a crossbow. If you have the scope dialed in, and know the weight of your bolt and broadhead, you can be a pretty good shooter reasonably fast. However, one of the common misconceptions about a crossbow is that you will have a huge distance advantage over a regular bow. Although a crossbow looks like a firearm, it is just a string and bow pushing a stick. You can’t make 100-yard shots with a crossbow. In my experience, a 40-yard shot is about as far as you should shoot one in a hunting situation.

Shortly after that experience I ended up buying a crossbow very similar to the one I had shot. I did a couple moose hunts with it but never had a chance to use it in a hunting situation. It was heavy to lug around in swamps and I started to look for alternatives. Then a hunting friend told me he had a compound crossbow for sale. The compound worked on the same basic principle as a compound bow, with pulleys that made it easier to load. This crossbow was also significantly more compact and lighter than what I was used to. It also had a red dot scope, which was great in low light and a built-in shooting stick that allowed for more steadiness on the stand. I shot the crossbow a bunch of times and it was deadly accurate. It was time to test it in a hunting situation.

My first successful hunt with a crossbow was on a black bear. I was set up on the edge of a corn field where the bears were knocking down the farmer’s crops. There was a well-worn trail in and out of the field and at dusk, bears would make their way to the corn. I was up on a stand when a 250-pound boar appeared and started ambling towards the field. He was sniffing around and had my scent. When he stopped, I laid the red dot on his shoulder and squeezed. The bolt shot out and found its mark. He went about 25 yards and fell over dead. It was one of the quietest hunts I’d ever experienced. I’ve taken several other bears with a crossbow since then and hope to harvest a deer and maybe even a moose with it someday. I have full confidence in the crossbows ability to harvest cleanly.

No, a crossbow isn’t everyone’s cup of tea and that’s just fine. However, as a hunting tool it is undeniably effective. They are also fun to shoot and practice with. You can’t ask for much more than that.

Out there, we’re all the same