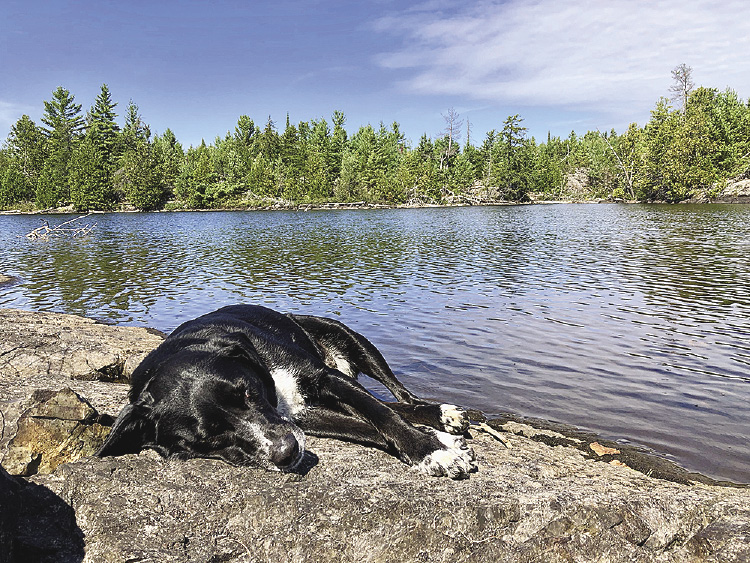 Leo naps in the sun next to the Agamok River along the Kekekabic Trail. | ERIC CHANDLER

Leo and I were lost. I perked up when I remembered my Dad’s quote: “You’re only lost if you don’t know where to go next.” I asked Leo for some ideas, but he’s my dog. He just panted while we stood on an open ledge in the hot sun. From the south side of that major ridge, I looked back to the Agamok River gorge where we ate lunch. We stood in an endless sea of young poplars growing up in the aftermath of the 2006 Cavity Lake Fire. The guidebook warned it would be difficult to keep the track in that area. I came up with a plan using the topography and executed it by bashing through the undergrowth. We found a cairn marking the trail about 30 minutes after losing our way. Over the next three miles, I lost the track six more times. I asked for that kind of adventure and we got it. Big time.

The Kekekabic Trail is a remote, minimally maintained hiking trail. It stretches 41 miles from the Snowbank Lake Road trailhead near Ely all the way to the Gunflint Trail in the east. Most of the path is inside the Boundary Waters Canoe Area Wilderness (BWCAW) in the Superior National Forest. I heard stories about the difficulty and isolated nature of this trail. The question rattled around in the back of my head for years: How tough could it be? I wanted to avoid people and bugs, so I picked September. My generous wife Shelley let Leo and me off the leash for a five-day stretch right after Labor Day. The Kekekabic Trail Guide is essential (April 2017 edition: northcountrytrail.org).

The logistics of “the Kek” were challenging. We had to get a permit since the trail is in the BWCAW. I wanted some means of communication, so I rented a SPOT GPS tracking device. This transmitter displayed our position to my wife on our home computer. It allowed me to send tailored e-mail messages to her and it had an SOS button. I gave a detailed itinerary to my wife. The device was only a supplement to that plan, but it made us both feel a little bit safer.

Over two days, Shelley drove 500 miles to help me plant a car at the takeout and shuttle us to the start. (These were the first two days our kids were back in school. Did I mention she’s a saint?) The key would be to remain healthy and hydrated. Out of caution and preparedness, I built a 60-pound pack. During those two days of driving, I agonized over what I could cut and eliminated 7 pounds of gear. Shelley launched us at the west trailhead. I promised not to do anything dumb, different or dangerous. Leo promised to roll in anything smelly.

On day three on the Kekekabic Trail, we met an older couple from Switzerland as they scouted the Thomas Lake portage. They were grandparents marking the 40th year since their first BWCAW trip. Other than that, it was just me, my dog and a lot of careful hiking. Most of the time, the walking was okay. Day two was difficult with dozens of fallen trees blocking the trail. Undergrowth filled the trail on days four and five, but that was better than crawling under and around blowdowns. On the last day, I could’ve done without seeing those fresh piles of wolf scat when I couldn’t see 20 feet in the brush. But the challenging parts have already started to fade from my mind. I can’t speak for Leo.

The good memories remain. Walking for days in mixed growth forests past beaver ponds and camping on four different isolated lakes. Seeing an old rusted bandsaw blade, a remnant of logging operations. Watching the impressive regeneration of the forest in the aftermath of fires and man. Listening to loons. One late night, a beaver amused me as it slapped its tail a dozen times as it crossed Medas Lake beside our ledge rock campsite. The tail slap sounded like a full-grown man doing a cannonball. That’s freaky in the wee hours. We saw several ruffed grouse, so tame that they wouldn’t flush. Up and down ridges, past views of an ocean of trees stretching to the horizon. No bugs worth complaining about. Swimming in Gabimichigami Lake. Watching the sun light up the mist over Parent Lake at sunrise. Seeing my buddy Leo with his pink tongue flapping in the breeze coming back to check on his slow companion. One night in the tent, I woke up to hear growling. Well, it was Leo chasing squirrels in his dreams. I may have soiled my sleeping bag.

When Leo and I made it to Grand Marais, I bought him some Milk Bones. Then, I bought the best burger I’ve ever had at Dairy Queen. Later, I did the math. I lost 8 pounds hiking the Kekekabic Trail. I used up 11 pounds of food and fuel from my pack. The Kekekabic Trail was one of the hardest trips I’ve ever done. Brutal numbers are not the point. My lasting memory will be sitting in the sun with Leo while he naps by the roaring cascades of the Agamok River. Alive and alone in the remote north. Filled with delicious fatigue and not yet lost. 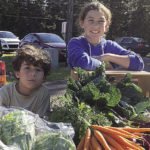 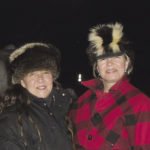