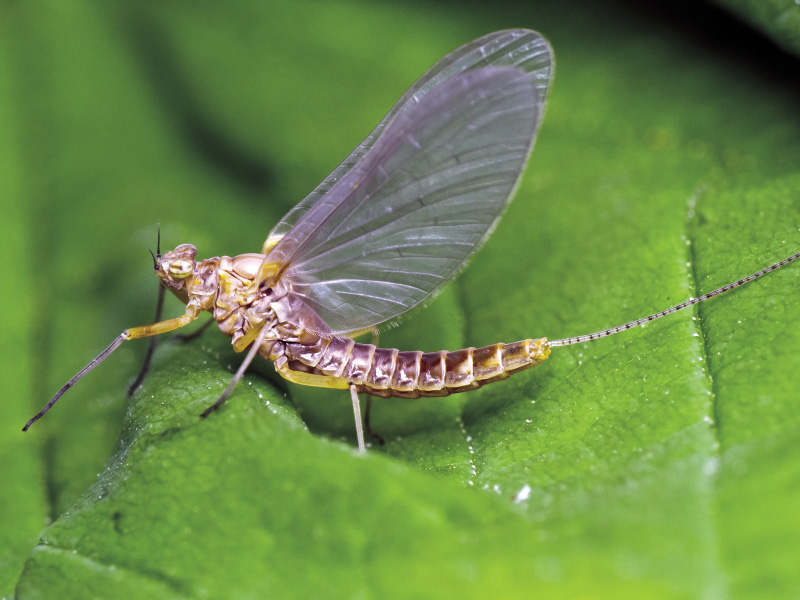 When we reach July, summer is already beginning to slip away, even though it has just begun. We’ve passed the Summer Solstice, marking the longest day in the year. For those of us who pay attention to such things, it’s all downhill to winter from here. Fortunately, it’s a slow ride.

Deliciously long evenings linger through July. I try to make the most of them, fly-rod in hand. Right around sunset, large Hexagenia mayflies emerge from the bottom of lakes and ponds where they’ve spent their nymphal lives, swim to the surface and transform into elegant mayflies. After doing so, they rest on the surface of the water for moments or minutes before taking flight to begin their one-day mating ritual. As they rest on the surface, the mayflies become the main course for just about every fish swimming beneath them; trout, bass, whitefish and even walleyes. I like to cast a phony mayfly amongst them and fool those fish.

The Hex hatch, as it is known to fly anglers, is the highlight of my fishing year. For two or three weeks, the evening dry fly fishing is as good as it gets, anywhere. The big mayflies are a significant source of protein appearing at the peak of the growing season. Fish large and small show little caution as they gobble them up, creating a fishing situation where even a duffer stands a good chance of catching them with a dry fly, considered by some to be the epitome of angling. Be that as it may, a summer evening spent casting flies to cooperative fish is just plain fun.

For me, fishing the hatch, as it is called, is most often a solitary experience. Typically, I head out after supper for any one of a number of lakes not far from home. The sun is sinking toward the black spruce lining the lake’s western shoreline as I slip the canoe into the water. On the best evenings, the breeze is barely a whisper and the lake surface is calm, although I’ve often caught fish as my fly bobbed on the wavelets created by a light wind. On most evenings, I’m on the water before the hatch begins, so I scan the surface, looking for the telltale silhouettes of resting mayflies, which look like tiny sailboats. Sometimes, I’ll see the distant splash of a feeding fish. If I see continued splashes, I’ll move closer to investigate them.

On a river, feeding trout generally take up a position and then rise to the surface to eat insects drifting with the current. Most likely they will continue rising in the same place. You can watch a feeding fish and determine where it is rising before you make a cast to catch it. On a lake, surface-feeding fish are on the move, actively seeking mayflies. When you see a rise, you must determine what direction the fish is swimming and then cast ahead of it. Since the fish is beneath the water and thus invisible, the only way you can learn how to do this is with practice.

I’ve been practicing for years. Usually, I begin my evening making “blind” casts in hopes a cruising fish will find my floating fly. Once the mayflies appear and fish begin rising to them, my casts become more deliberate. If a fish rises to a mayfly within casting range, I try to place my fly in its path. Sometimes I’m rewarded with an immediate rise, or maybe not. Sometimes I’ll let the fly float for a minute or more before casting again.

Fishing the hatch is best described as frenzied. While I’ve never timed how long the period of peak fishing activity lasts, it is generally 30 minutes or less. On many evenings, it is past 9 p.m. before the mayflies appear and the action usually turns off like a switch as darkness falls. In between, the fish gulp and slash at the mayflies as they gorge themselves with food. You have to catch fish, play and land them, then clean off, fluff and dry your fly so it floats when you cast out again. Woe to the angler who must untangle a leader or tie on a fresh fly during the heat of the action. You have to deal with fading light, swarming mosquitoes and the adrenaline surge created by being surrounded by aggressively feeding fish. This is no time for shaky fingers. Nor is it time to realize, as I have, that you should have brought a flashlight. Of course, you could stow a second fly rod that is rigged and ready to fish.

Something I like about fishing the hatch is the simplicity. You don’t need a lot of gear other than a fly rod and a handful of flies that imitate Hexes. Bug dope is a necessity. I usually bring a jacket because it often becomes chilly as darkness falls. I rarely use a landing net, preferring to land my fish by hand. Occasionally, when attached to a feisty 20-inch trout or walleye, I wish there was a net in the canoe. My flies have barbless hooks to make it easier to unhook fish and, if I choose to do so, release them.

On a good night during the hatch, I may land a half dozen trout or walleyes. Sometimes, when fishing on a lake where they exist, I’m lucky enough to land a lake whitefish. They typically run three or four pounds and put up a heck of a fight. Best of all, I have fresh whitefish for dinner the following evening.

For me, fishing the hatch is a quiet celebration of summer. I’ve had numerous encounters with loons, beavers, mergansers and moose out there. The critters seem to accept the unobtrusive presence of a fly-fisherman, going about their activities as though I don’t exist. I’ve watched the setting sun paint the sky and clouds with subtle and striking beauty before the colors fade into the dusk as the sun sinks into the trees. Then I’ve enjoyed the coy winks of fireflies in the shoreline vegetation. Often, I’m all alone on the lake; the only sound the ominous hum of mosquitoes and other insects overhead.

I try to experience all of this, as many evenings as I can manage, before the hatch comes to an end. The height of summer is a time so fine and so fleeting that I want to make the most of it before it slips away. 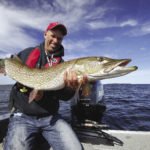 My Favourite Fish to Eat