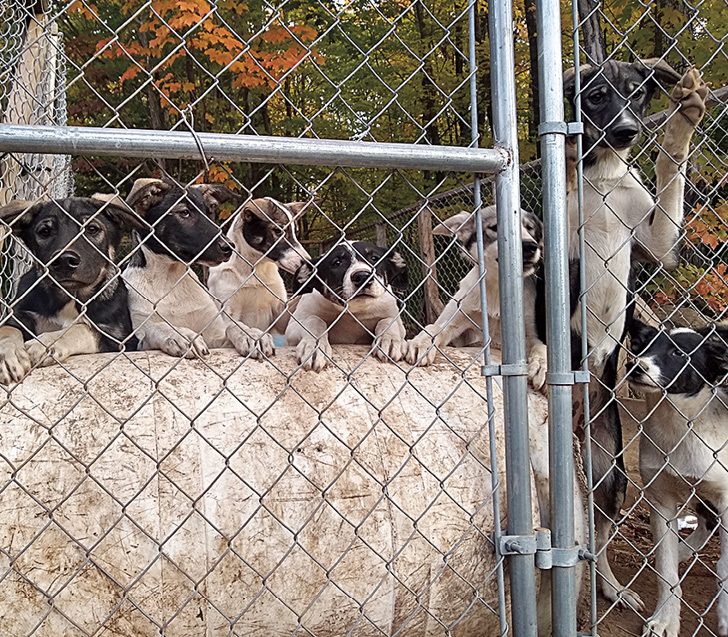 Nine puppies watch as a dog team returns from a run. | ERIN ALTEMUS

Fall comes easily this year, the cool nights edging in slowly and yet consistent. We haven’t had the wild weather swings of some autumns in the past, such as last year when I recorded the first frost in mid-October. This year we’ve had several nights of frost by mid-October. There are 29 dogs here eager to run, which includes three from our first litter of 2011, now aged 11 and Ringo age 10. There are also five yearlings–the “Goonies,” still learning the ropes but with energy to burn.

Pulling out the ATV, harnessing the dogs, firing onto the trail and watching the dogs settle into a run–this is all familiar. Twelve years of running dogs, watching summer give way to fall, watching the leaves change color as the temperatures drop–this is now a habit, a way of life that we plan for and around. It’s a given that we will rise before the sun on September mornings to take advantage of the cool air and send off a team before our daughter wakes. With the team on the trail, one of us gets her off to school. As temperatures cool even more, we will have the freedom to run during any part of the day.

This familiarity is a given for the dogs, too. They seem to know when fall training is about to begin, the energy level rises in the dog yard. They wait eagerly for us to leave the house in the morning and pull out harnesses. None are more familiar than Beezus, Punky and Nancy. Now geriatric, their eyes a little more cloudy with age, their bodies a little more bulky, they are as eager to run as any dog. Beezus, our main leader for a decade, now lives in the house. He has declared himself a couch dog. We tried to argue, but he insists and one can’t really argue with a dog that has led us to the Beargrease finish over a half dozen times. When it’s time to run, we simply let him outside and he finds his place at the front of the team. Nancy and Punky look as smooth as ever running with the pack, and no one howls more desperately than Nancy if left behind. Punky, who once chipped my tooth while jumping frantically on the gangline and bashing me in the mouth, can still pack a punch if I’m not careful. Watching these three who have been running with us almost as long as we have been mushing gives me a deeper understanding of these animals and their love of the trail. I will not be the one to deny them this passion.

In other news, there are nine young sled-dogs-in-training (puppies). Two litters–four boys and two girls–have kept us on our toes all summer and fall. They are escape artists and despite our attempts to button up the kennel, they keep finding their way out. We take them on fast and furious bike rides, but inevitably a couple will stray from the trail. They run in and around the big dogs causing general ruckus. There’s no doubt they will be fantastic racing dogs but getting knocked down by the puppy mob is not very fun. It won’t be long before we can harness them up, and I see them studying the team as the big dogs run by their kennel.

Our friend and kennel help of the past few years, Anna, has sought a new experience mushing dogs in Alaska this winter. Training near Willow and planning to run several of the 300-mile Iditarod qualifiers, she has had to contend with some new challenges including many more moose on the trail, incessant rain and some impending cold that will require a whole new level of mushing gear. Without any handler help at the kennel, it will just be Matt and me running the teams. We don’t plan to change up the race roster much. Matt will run the Beargrease marathon team, and I will likely run Can Am. We will squeeze in some shorter races as well.

Perhaps we are getting to be a little like Beezus, Nancy and Punky, eager for the adventure, content to run on the trail with friends, never tired of watching the seasons change. 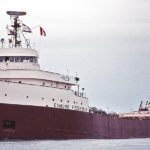 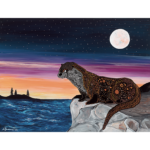