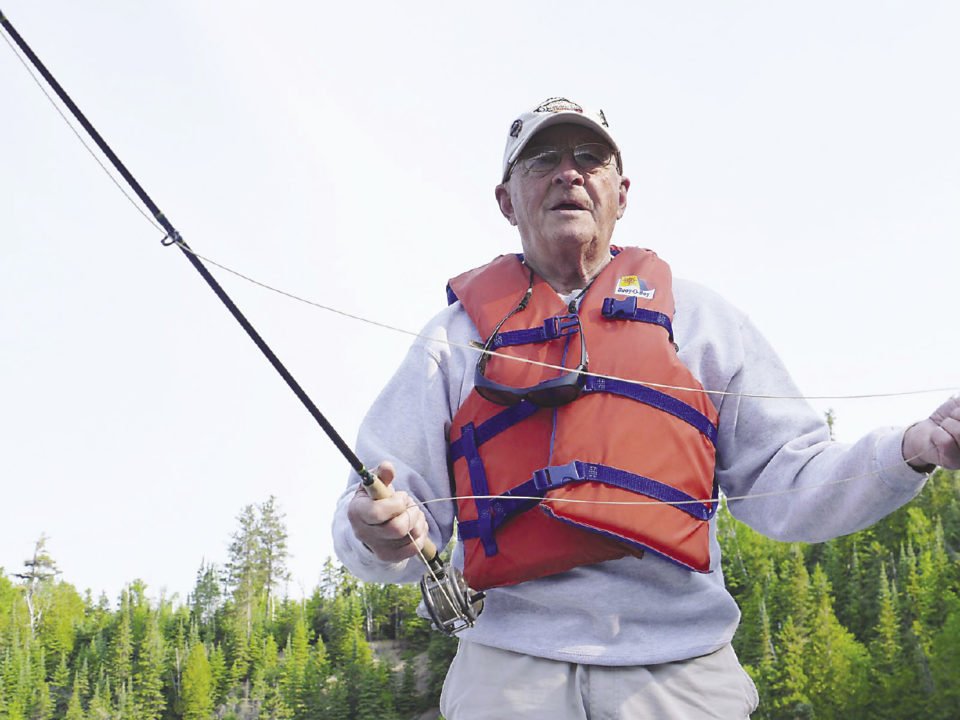 I can’t recall when Ray Dupuis Sr. and I first crossed paths, but I do know it was at least three decades ago. I have this in my memory bank because one of my very first interviews as a budding outdoor writer was with Dupuis. That interview was done in 1989, and at that point he was already a brook trout fishing legend in the Nipigon area. To me, a brook trout nut from my earliest days, interviewing Ray Dupuis Sr. was like meeting the Dalai Lama. The master.

So last fall, when I heard that Dupuis, 86, was to be inducted into the Freshwater Fishing Hall of Fame, in Hayward, Wisconsin, I could not have been happier for him. Ray Dupuis Sr. is truly a great angler for sure, but he is largely being recognized for his life-long promotion of fly fishing, catch and release of Nipigon brook trout and his leadership in conservation. The rebirth of the Nipigon River, and the local anglers general embrace of more conservative bag and size limits, is at least partly due to Dupuis and his exemplary actions.

As a young man, Dupuis spent hundreds of hours fishing speckled trout on the banks of the Nipigon River. In the 1950s, Dupuis says there were “loads” of brook trout, from one to nine pounds in the river, but catching those fish then was a real trick due to the log drives on the river.

“In those days they were always driving wood down the river,” said Dupuis. “And we got to know how to cast out between the logs and stick the point of our rod down underneath the logs and then reel. We got quite a few fish that way.”

Then things began to change. Fishing pressure and harvest increased, and water levels on the river began to yo-yo, a by-product of Hydro generation. This rapid change in water levels often left trout eggs high and dry. In the 1970s and 1980s, Dupuis says he slowly noticed a decline in the number of brook trout in the river. He began to release all the brookies he caught and encouraged other local trout anglers to do the same. Dupuis says his promotion of live release and harvest limits for the Nipigon’s famous speckled trout was not always an easy sell. In fact, there was some kick back.

“I haven’t kept a trout from the Nipigon River in over 25 years,” he said. “That live release…we got in quite a few heated discussions with other sport fisherman on that. But it’s workin’ real good.”

What Dupuis had to say about trout conservation would only have mattered if he was both a community leader and a great fisherman. He is both. In the 1980s, the Ontario Molson Big Fish contest was the biggest angling contest in Canada. There were prizes for both caught and kept and caught and released fish, but the focus was on anglers who released. Dupuis owned the brook trout catch and release category and usually showed up in a couple of other categories. In 1985, Ray Dupuis Sr. was named Angler of the Year by the Big Fish contest for the many trophy-sized trout he caught and released.

One of the people who worked closely with Dupuis on the resurrection of the Nipigon brook trout is retired Ontario Ministry of Natural Resources and Forestry biologist Rob Swainson. Dupuis credits Swainson with pushing for many of the regulation changes that helped save the Nipigon River fishery. For over two decades, both men worked together on the river and its fishery. Dupuis and his boys tagged many hundreds of brook trout as part of a co-operative angler program that helped track the fish, and proved that catch and release was working. Swainson has high praise for the veteran Nipigon angler.

“Ray was the first to raise the alarm bells and ask the MNR to do something about the decline,” said Swainson. “By sharing his incredible knowledge gathered through all those years fishing on the river, Lake Superior and Lake Nipigon, he saved me years of work. His help allowed me to right away tackle the real issues…water level fluctuations and over-fishing. Ray’s vocal support of the proposed recovery efforts was instrumental in garnering the public’s support.”

Last year, Dupuis was nominated for the Freshwater Fishing Hall of Fame by his childhood friend Dan Gapen. A well-known name in the North American fishing industry for his writing, TV shows and tackle company, Gapen is also a member of the Fishing Hall of Fame. Gapen’s father, Don, owned the legendary Chalet Lodge, on the Nipigon River. Gapen and Dupuis spent many early days together around the region fishing and guiding. While the two were close childhood friends, their bond has continued into their 80s. A few years back, Gapen returned to Nipigon for the celebration of the hundredth anniversary of the world record brook trout caught in 1915. Both men once again fished together on the system and renewed a life-long bond.

“Now in our later years, we’ve gotten together and it’s been really great to have such good friendship and longtime memories,” said Dupuis. “We have been away for a long time from each other, but we are still good friends after many years.”

Dupuis said he is humbled and excited to be entering the Freshwater Fishing Hall of Fame. “It’s not anything I ever thought about,” he said. “But I am happy to be there.” Dupuis was inducted in March, in Minneapolis, at the Sportsmen’s show. 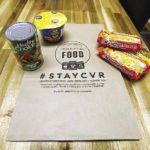 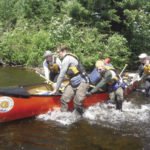