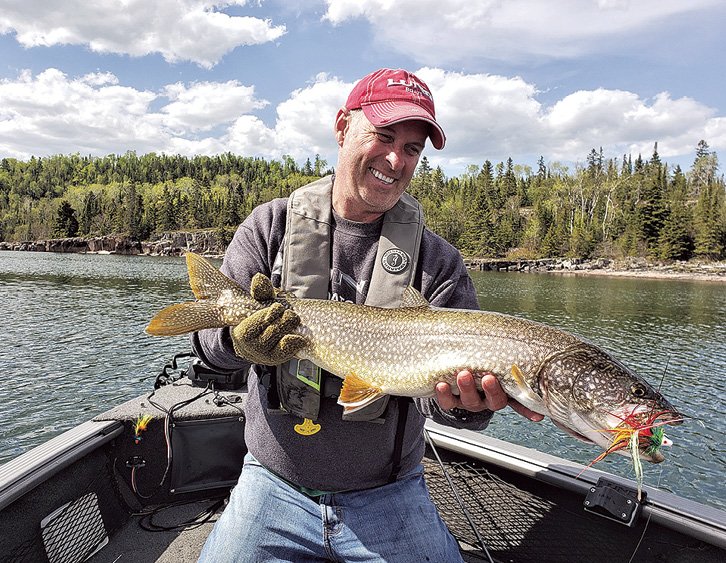 Back in the early 80s, a few high school buddies and I decided we were good enough fishermen to take a crack at entering a derby. The big event of the day was the Lake Superior Trout Hunt, a catch and kill derby that allowed you to win prizes for weighing in the largest lake trout, steelhead, coaster brook trout, pike, walleye or salmon. My buddies and I had zero experience on Superior, but we did have a hot tip on where to go.

“Little Trout Bay,” said my friend George. “I hear they are biting there.” A hot tip is a hot tip, so we grabbed George’s dad’s boat, hooked it up to his dad’s car, and away we went. The bay was beautiful and as we dropped the boat in; the excitement was building. Since we had no clue where to fish, trolling was the order of the day. Spoons were tossed behind the boat and down the shoreline we went. The water was aqua blue, and the rocky shoreline looked very fishy indeed.

About 15 minutes in, the other angler hooked up with a 7-pound steelhead that went cartwheeling through the air. On the board. A few minutes later I had a fish strike that turned out to be a laker of about 5 pounds. The last fish was another steelhead, a small one, but still. Trout hunt here we come! We didn’t clean up that day, but we did get some prizes. And I still have the trout hunt beer mug I won nearly four decades on. That was the first time I visited Little Trout Bay, a jewel of an area that is somewhat overlooked by many Thunder Bay boaters, anglers and hikers.

The Little Trout Bay Conservation is owned and operated by the Lakehead Region Conservation Authority, in Thunder Bay. This conservation area is situated on the shore of Lake Superior’s Little Trout Bay and includes 18 hectares of largely forested land. On-shore activities found at the conservation area include a pavilion with picnic tables, BBQ, toilet facilities and displays built in 2001-02. In partnership with the Nature Conservancy of Canada (NCC), the LRCA’s reopened Lookout Trail (1 km) now connects to the NCC’s James Duncan Nature Trail and Big Trout Bay Conservation Reserve. The James Duncan Nature Trail is a 9.5-kilometre hiking trail. The hike offers users a chance to see wildlife like birds, squirrels and deer, and is rated as moderate.

The boat launch at Little Trout Bay is a major draw and can handle large craft as well as smaller canoes and kayaks. The launch provides public access to Lake Superior waters south of the City of Thunder Bay. Several other bays are within striking distance of the launch including Big Trout, Cloud, Pine and Pigeon Bay.

Little Trout Bay and the surrounding waters of Lake Superior provide excellent fishing for salmon, whitefish, rainbow trout, pike and lake trout. Coaster brook trout are also increasingly common in these waters, as are brown trout. Some of the rivers that enter the lake south of Little Trout, including the Pine and Pigeon Rivers, have good walleye fishing. Ice fisherman also have a fine opportunity to fish this area thanks to the access provided by the LRCA. While ice conditions can be a little dodgy at the mouth, inside Little Trout Bay the ice is generally stable and safe. Good winter lake trout fishing can be enjoyed here, as well as a shot at whitefish.

Since that first open water trip to Little Trout Bay in the 1980s, I’d been back sparingly to the area. But last June 2020, my friend Davis Viehbeck and I spent several hours fishing and exploring the area around Little Trout Bay and east up the coast. I’d forgotten just how breathtakingly beautiful the bay itself—and the coast of Superior—is here. Huge rock cliffs are common, with a wide variety of trees growing on what looks like solid rock. As you move out of the bay, there are reefs and picturesque islands. The water is ultra-clear, which allows you to occasionally see fish as you boat over them or as they approach your lures. Viehbeck and I both spent most of our time casting rocky points and reefs. The action was not crazy, but several lake trout were caught, many of them in relatively shallow water. Off one small island, I threw a bucktail jig and was shocked to see a large lake trout cruise out after my jig in less than 5 feet of water. I would say the fish was conservatively 15 pounds, but it may have been larger. It did not come back.

Although Viehbeck and I were fishing out of an 18-foot boat, you can comfortably angle in smaller craft on Little Trout Bay. The bay is quite sheltered, but the key to wave height is wind velocity and direction. An east or south-east wind can whip up the bay relatively quickly. I use the Windfinder App to monitor wind speeds and velocities and I’ve found it to be quite accurate. There are other ways to watch the wind as well, but if you are in a kayak, canoe or small boat on Lake Superior, you need to be very aware of conditions.

One last note about the Little Trout Bay Conservation Area: The LRCA maintains this launch and grounds and not the government. The $5 parking fee is mandatory and important as it helps cover these costs. Regular users might also want to consider purchasing an Explorer Card. They are $40 Cdn + HST and cover the user annually at the LRCA’s many other properties and forest blocks. The Explorer Card can be bought here: lakeheadca.com/conservation/explore-card.

Little Trout Bay Conservation Area is a jewel and worth the trip if you are looking for a unique outing close to Thunder Bay. 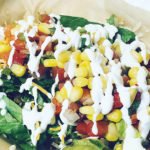 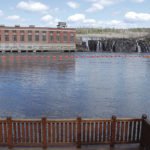