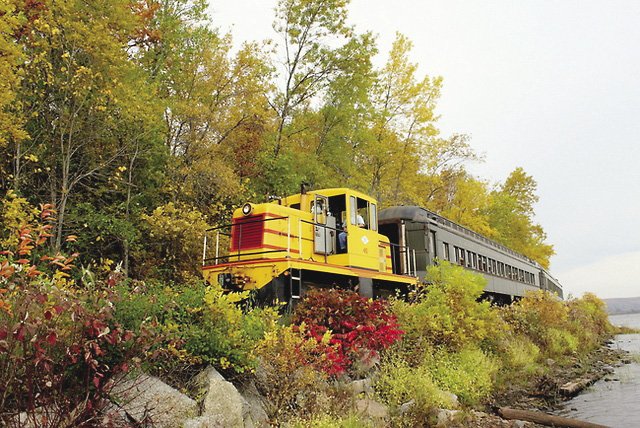 Passengers on the Lake Superior & Mississippi Railroad get an up-close view of an area that isn’t accessible by foot. | VICKI SURGES

The whistle blows as the train gains momentum along the tracks, beginning its journey through western Duluth. Operating as a 501c(3) non-profit with an all-volunteer 60 person roster, the Lake Superior and Mississippi Railroad transports approximately 6,000 passengers during its season each year. The passengers are educated about the history of this first railroad into Duluth in 1870, and the importance of it to the railroad industry.

The present day tourist train, the Lake Superior & Mississippi Railroad Company, was established in the early 1980s by a group of volunteers from the Lake Superior Transportation Club. The organization’s volunteers are responsible for all aspects of operation and wear many hats to keep the train running smoothly. A typical trip involves a conductor, engineer, fireman, narrator and multiple car hosts who remind passengers of safety protocols and to give detailed historical and landmark narration along the way. Behind the scenes, other volunteers are busy as mechanics working on the equipment, while others are building and repairing track, clearing brush along the route, cleaning and preparing the coaches, painting, restoring, marketing, providing safety education and much more; all to ensure a positive, fun, and safe experience for the passengers.

The round trip excursion, approximately one hour and 45 minutes, carries up to 150 guests through the 12,000-acre St. Louis River Estuary, a freshwater estuary that is unique to the Great Lakes in its variety of ecosystems and wildlife. Particular native fish and migratory birds place great importance on this area; passengers get an up-close view of an area that isn’t accessible by foot.

“About half a mile from the end we have a mile long stretch where we go across a narrow causeway,” explains president Joel Manns. “On one side is what we call Mud Lake and the other side is the St. Louis River. Most of the time when you’re on that [causeway] you look out the windows and you don’t see anything below you. This is by far our most popular segment.”

An immersive wildlife experience, geese and turtles have become so comfortable with the train’s presence that they have learned it doesn’t pose a threat.

“We will stop for any animal and we will lift turtles off the track. We’ve gotten to the point that the geese know we won’t hit them. They just waddle their way down that causeway; they are not afraid of us,” says Manns.

After climbing on board the historical and educational railroad experience, passengers can choose between the three cars for the train ride. In addition to the two 1912 coach cars, the safari car (outdoor car) offers the option to breathe in fresh North Shore air as they roll along. The open air car, built in 1928 for the Northern Pacific Railway, was donated to the Lake Superior Mississippi Railroad by the Hallett Dock Company and converted for passenger use.

The original 154 miles of track connected St. Paul and Duluth, which provided a connection for goods to end up in the Eastern markets. Connecting the head of navigation, or the farthest point above the mouth that can be navigated by ships, of the Mississippi River and Lake Superior is regarded as a crucial step in rail development in the United States. The first trip on the tracks, which represented the first train into the City of Duluth, was almost 150 years ago in 1870.

“The train is a very special resource for the wildlife and environmental aspect but also the history. We aren’t just doing a train ride, we are telling a story about the river and a story about industry, people, and Native American culture,” says Manns. “As they are boarding the train I like to tell them, ‘Leave 2019 behind, put your brain into 1880 or 1890; think about what it would have been for those people. Rather than looking at a plaque or reading a sign that there used to be a railroad here, they are actually on that railroad and they are seeing the things that the people in 1870/1880 saw on that same route. They are going at the same speed and reliving the experience.”

Three years ago a unique brainstorm brought to life a partnership perfect for paddlers who want to see the water and surrounding area from the train and their watercraft. After riding the train along the water and hearing the vivid narration, canoers or kayakers disembark the train at the halfway point to paddle back to their vehicle. The Spirit Lake Marina offers the option to rent a canoe or kayak or bring your own.

You can purchase tickets and gear through the Lake Superior and Mississippi Railroad website: lsmrr.org. You will also find a “call to action” regarding the railroad’s current challenges with keeping its causeway in its current state. Train rides depart from the station on Saturdays and Sundays through mid-October at 10:30 a.m. and 1:30 p.m. The revenue from $18 adult and $8 children fares, as well as donations, are used for maintenance and restoration. 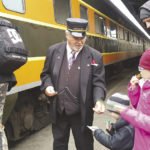 Join the train crew at the North Shore Scenic Railroad 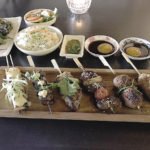