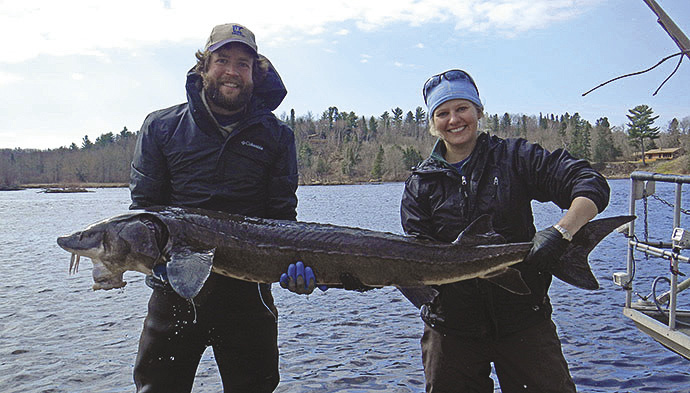 Jeramy Pinkerton and Anna Varian of DNR fisheries hold the largest sturgeon ever sampled in the St. Louis River. The sturgeon, 65 inches long and about 53 pounds, was captured April 20, implanted with an acoustic transmitter and PIT tag and released. | SUBMITTED

Fisheries staff at the Minnesota DNR are embarking on a new research project to study their growing numbers and learn more about how these long-lived, native species use the river and Lake Superior throughout the year.

Sturgeon sampled in the St. Louis River are being fitted with passive integrated transponder (PIT) tags, which will allow fisheries staff to monitor their growth. Roughly the size of a wild rice kernel, PIT tags are inserted under the skin of each sturgeon caught and are not noticeable to anglers, but can be read by a special wand-style reader if the fish is later caught by fisheries survey crews. By recording the lengths and weights of fish at the initial and later captures, fisheries biologists can chart the growth of individual fish over time and begin to estimate the population size.

The research project is being accomplished through a partnership with The Nature Conservancy, Wisconsin DNR, and Fond du Lac Band of Lake Superior
Chippewa.

Funding for 200 PIT tags and five readers was provided by The Nature Conservancy, in part, by a grant from the Biodiversity Fund of the Duluth Superior Area Community Foundation. The Minnesota DNR funded the acoustic tags and
receivers.

“Sturgeon recovery has come a long way, but we have more to learn about their movements in the St. Louis River and the big lake,” said research project lead Anna Varian. “Habitat restoration work below the Fond du Lac dam has improved spawning grounds for sturgeon, and we’re learning quite a bit about their time in the river. But we also want to know how these fish move through other habitats and how far they travel into Lake Superior.”

Research data are shared between the Wisconsin DNR, the U.S. Fish and Wildlife Service, and the Department of Fisheries and Oceans Canada, all of which are doing similar tagging work in waters of Lake Superior. Fish movement throughout management areas and jurisdictions will help agencies coordinate harvest and protections to ensure continued recovery.

While sturgeon are often thought of as dinosaur-like fish that have been around forever, their re-established presence in the St. Louis River is relatively new. Overharvest and pollution extirpated the species, which are slow to mature, highly dependent on good water quality and require specific spawning habitat. Water-quality improvements directly linked to the Clean Water Act of 1972, habitat improvements linked to establishment of the St. Louis River Area of Concern in 1983, and harvest protections set the stage for sturgeon restoration and survival.

Sturgeon were reintroduced by stocking efforts from 1983 to 2000, and have made a slow, but steady comeback. Natural reproduction was first documented in the river in 2011. The lag in time was expected since sturgeon reach reproductive maturity around age 17 for males, and age 26 for females – but may only spawn every three to five years. Previously stocked fish are just now reaching reproductive maturity in larger numbers, so biologists expect to see increases in natural reproduction in the coming years. 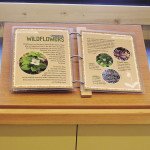 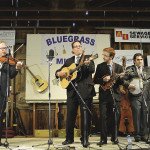