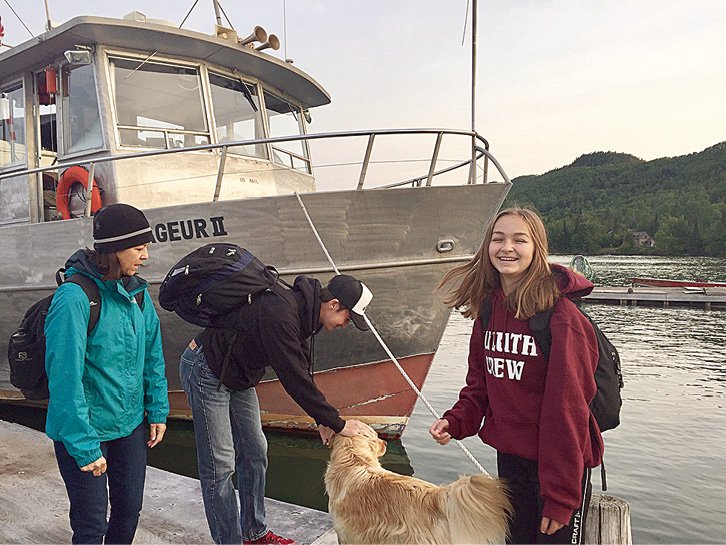 A dog gives us a sendoff from Grand Portage at dawn. | ERIC CHANDLER

My wife Shelley led the four of us along the narrow path with Lake Superior to her right and thick brush to her left. She watched her step and looked at the ground. She thought, You know, I should really pay attention to what’s farther out in front of me, in case there’s a—

She looked up and saw the broad, brown back of a moose 20 yards away. She stopped and pointed it out to me. I put myself between my family and the moose, my daughter Grace right behind me. We quietly backed up and tried to give plenty of room.

Two hikers on the far side of the moose had the opposite plan. They kept getting closer and closer to the animal, about three times closer than we were on our side. I kept backing us up, fearing the worst. Finally, the moose had enough. Suddenly, the brown shape exploded out of the brush. The massive antlers filled the trail like the front of an 18-wheeler and it sprinted toward us with long, loping strides. It ran halfway to me before I could even react. Then, just a few yards away, it suddenly veered back into the dense undergrowth. We could still hear it, but couldn’t see it. Grace had plunged her fingers into me like meat hooks, so I checked myself for broken ribs.

Before the moose was out of earshot, the older man and woman who pushed it into us walked up. I almost gave the guy an earful about taking a year off my life, but his smile stopped me. He showed us the pictures of the moose on his phone. Since they were closer, his photos were, of course, better than mine. His wife said that moose were his favorite thing in the world. He had moose posters in his house and moose paraphernalia on his shelves, but he’d never seen one until now. We got caught up in his childlike enthusiasm and I managed to keep my mouth shut. Safely back at the Rock Harbor marina, my family posed for a photo making Bullwinkle antlers with their hands. I guess it was a big deal for us on Isle Royale, too.

In 2020, Isle Royale National Park had the smallest number of visitors of any national park in the continental United States. It’s not surprising since the only way to get there is by boat or plane. You have to plan early for an Isle Royale trip. It’s smart to get your National Parks pass before you arrive. Pets aren’t allowed, so we boarded our faithful dog Leo in a kennel. There are several ferry options, but for our August 2017 trip, we took the Voyageur II ferry from Grand Portage. On the way to Rock Harbor on the east end of the island, it stops in Windigo on the west end and at several spots along the north side. On the return to Grand Portage from Rock Harbor, the ferry motors along the south side. We would circumnavigate Isle Royale, so it felt like a cruise all by itself. It’s about a 7-hour jaunt one way.

After all those logistics, I folded and took the easy route of renting a Rock Harbor Lodge cottage. A simple cabin we could use as a base camp. We brought snacks for lunch and counted on the restaurant for breakfast and dinner. I have to admit that beer with your burger for supper sounded better than dehydrated meals over a tiny stove. I must be getting older.

We drove up the North Shore to Grand Portage and stayed at the casino hotel. This put us in place for the dawn departure of the Voyageur II. We hiked Mt. Josephine that afternoon. We looked west and saw Grand Portage Bay and the old fur trading post. We turned around and saw the dramatic sweep of Wauswaugoning Bay leading to the Susie Islands with the sliver of Isle Royale on the horizon. That hike alone was worth the trip.

The next morning, we plowed through the waves past the lone sentinel of the Rock of Ages lighthouse to Windigo. We stretched our legs on the dock during the short stop. Later, the ferry motored past the long straight northern shoreline of Isle Royale and Grace and I stood at the aft of the boat by the churning blue wake. A freshwater lake as big as the ocean with the mountains of the Canadian shoreline off to the north. This surreal setting gave us brand new sights and sounds, just a few hours from home in Duluth. The pleasant disorientation felt like a true adventure.

We pulled into the secluded Rock Harbor marina and checked in at the lodge. We went for a short hike, which felt good after a lot of sitting. We looped to the west of Rock Harbor to Suzy’s Cave. The cave is the beginning of a sea arch carved thousands of years ago by the waves when the water levels were higher.

The next day validated the cabin lodging choice. Strong wind blew torrents of rain from the south. We spent the day inside playing cards. While setting up rental canoes for the next day, I ran into a Duluth buddy who kayaked through the tempest from a campsite along the southern shore. He made it just in time to catch his Isle Royale Queen IV ferry back to Copper Harbor. Then, Mother Nature showed she’s still in charge. The ferry launched into the teeth of the gale. While we took a short walk, we saw the ferry return to Rock Harbor. When the boat went fast enough to make headway, it thrashed the passengers. When they tried a slower speed that didn’t punish the people, they were at a standstill, so they turned around.

Our second full day dawned overcast but calm. My son Sam and Shelley paddled an aluminum canoe away from the dock in Tobin Harbor on the north side of the narrow peninsula. Grace and I followed in a tandem kayak. The water was still and we saw floatplanes landing in the glassy smoothness. The water was clear as gin and we saw snails crawling along several feet below the surface. A loon swam right up to us before veering off, practice for the moose encounter later that day.

After paddling, we hiked the Stoll Trail to the east of Rock Harbor. We saw broad views of Lake Superior along the rugged shoreline. We found the copper mine pits where ancient people pounded the mineral out of small depressions in the ground. That day, our treasure right next to the pits was blueberries, not ore. We grazed like bears for a half hour before going to meet our moose. After retreating, we passed several wildflowers and the larger, more recent Smithwick Mine pit. The sun broke free and gave us a great sunset over Rock Harbor on our last night.

The next morning, we rode the ferry into the morning fog. We just barely saw the Rock Harbor Lighthouse through the mist as we passed the south shore of the island. On Isle Royale, we felt like we were on the other side of the world, even though we were in Lake Superior only a half day from Duluth. It was a five day experience, with only two full days on the island. But those days will echo for years like the wail of a loon. 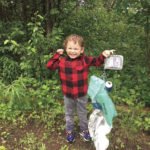 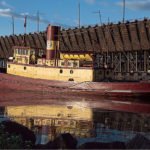