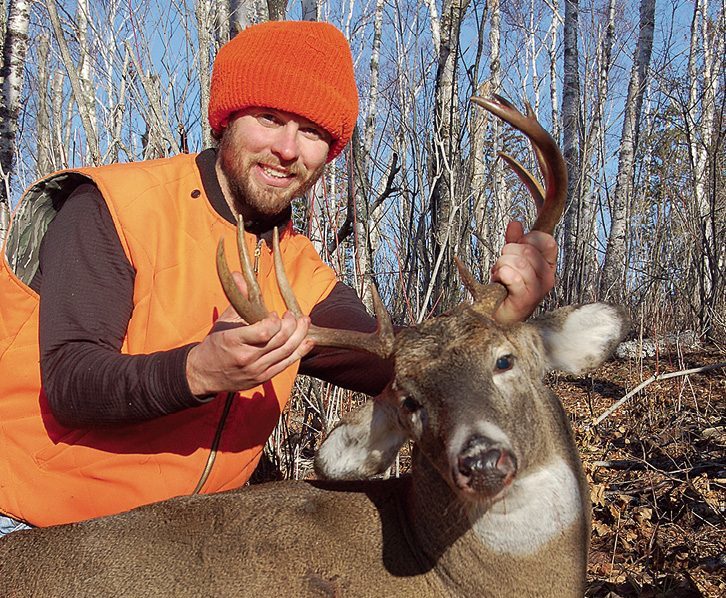 The author endured a fever and chills on opening day of deer season, but was rewarded with this 9-point buck. Dragging it out of the woods seemed to have a curative effect. | SUBMITTED

The day before deer season I had promised my friend Joe I would duck hunt with him. However, by Thursday evening I wasn’t feeling up to duck hunting. I had a fever, chills and a stuffy nose. But if I cancelled, I knew I would have to look into Joe’s sad puppy dog eyes and break his heart, so I kept our appointment.

I met Joe at the boat landing Friday morning, well before dawn. I was not looking forward to this. As much as I love duck hunting, I’d have much rather been in bed, nestled in my cozy blankets. Nonetheless, we donned waders, set out our decoys and greeted the dawn: Joe with naïve duck hunter’s optimism, and me with a blank stare as I concentrated on breathing through my mouth and contemplated the possibility of leaving early.

The hunt wasn’t my finest moment. My ears were plugged, which made it hard to hear duck wings cleaving the sky. My senses felt dull; my movements slow and awkward. When we had birds in range, I just wasn’t ready for them.

The hunting wasn’t too hot, but the morning was punctuated by Joe’s first bufflehead: a gorgeous drake that now adorns his living room. By mid-morning, however, the flight had slowed down and my symptoms worsened. Eventually, I slogged to shore and laid down on the high ground.

“Here comes a flock! Do you want to shoot?” Joe asked from a cattail clump a few yards away. I just groaned in reply.

“How about these?” Joe asked as another flock circled.

Eventually, Joe took pity on me and called it a morning. Packing up was no fun. There were a lot of decoys to retrieve with cold, wet hands, but the thought of going home and flopping down on my bed was good motivation.

I slept most of the day, exhausted from our early morning exertion, coupled with an overall lack of energy. I didn’t know how I was going to go deer hunting in the morning, but it was opening day and I couldn’t not go. That afternoon, I packed my truck with my hunting gear. Usually I would drive up north the night before season and spend the night in my truck. However, the idea of sleeping in a cold truck topper did not appeal to me in the least. I voted to sleep in my cozy bed and make a long drive early in the morning.

The following morning, I woke up extra early to make the 75-mile drive. It was a challenging, uncomfortable ride. At times I got chills and I cranked the heater to full blast. But minutes later I’d be sweating and I’d have to turn on the air conditioner. These hot and cold spells alternated for the duration of the drive. How I was going to spend a morning in a tree stand and shoot a deer was beyond me. I hoped a dumb buck would just stumble out right away and I could get the hunt over with.

I shouldered my climbing tree stand, toted my rifle and made the long trek to my stand site. The exertion took my breath away and I stopped frequently. I started the hike with my jacket in hand, but by the time I was halfway to my stand, almost all my upper layers were off. By the time I settled in my tree I was completely exhausted. It would feel good to just sit and rest. I hoped maybe the fresh air would do me good.

I sat, 15 feet up a birch tree, breathing through my mouth and trying not to cough. Maybe I’d get lucky and shoot one right away, but I knew that wasn’t likely. I rarely shoot a buck on opening morning. I watched the sunrise and began the task of sweeping my eyes back and forth, scanning for any sign of movement.

Usually that opening morning excitement keeps me fired up for several hours. That energy keeps me from snacking or getting distracted by my phone. But for whatever reason, that morning I reached into my pack and pulled out a package of Pop-Tarts.

So, there I was, trying to unwrap a foil wrapper silently in the woods—an impossible task. I don’t even know why I was eating because the season was only a half-hour old. I was chewing on a Pop-Tart when suddenly a doe came from behind me at a trot. Right on her tail was a buck. I threw the remaining portion of the Pop-Tart into my pack and snapped my rifle to my shoulder. I gave the rack a quick glance and saw that the buck was plenty good enough for me. That buck should have lived to see another day. All he had to do was keep tailing the doe. But, for some reason, he stopped just before he disappeared behind some trees. He was right in the open and the one branch that could have concealed him was about 6 inches too high to save his life. I snuck a bullet under the branch and the 9-pointer went down. I couldn’t believe it! Here I was, sick as a dog, with a nice buck down on opening morning. What a relief.

I got down from my stand right away. As happy as I was with the buck, I was more relieved that I could go home now. However, I wasn’t looking forward to the drag. It would be a fair distance, but at least most of it would be on trails. I tagged and field-dressed the buck, then carried my gun and stand back to my truck, leaving a few layers of clothing behind as well. Then I returned for the deer.

Dragging a deer out of the woods is never particularly fun, but especially when you’re sick. At least I didn’t have to worry about suppressing my cough now. I took my time, doing the best I could. When I needed to stop, I stopped. I had all day.

But to my delight, my strength was returning. A day earlier and I’d have really struggled getting that deer out of the woods. Today was no picnic by any means, but moving the deer was do-able. Besides, you have to stop now and then to admire your buck’s antlers anyway.

By the time I reached the truck, I was actually starting to come around. In fact, although earlier I was excited to go home, now I was embracing the day. My shotgun and a sack of duck decoys were in the back of my truck and there was a nearby lake I had always wanted to hunt… so I decided to go for it.

When I reached the parking spot where I’d have to begin the mile-long hike to the lake, to my surprise, I found a truck already parked there. Who would be duck hunting on opening day of deer season? A minute later I got my answer as a blaze orange-clad hunter exited the woods on the hiking trail. He said he was just hiking along the trail, taking a little midday walk, when he spotted an 8-pointer in the clearing only a couple hundred yards from the truck.

I immediately put my duck hunting plans on hold and offered to help him drag out his buck. It’s amazing what a little deer dragging will do for your health. 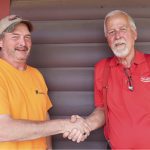 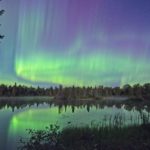