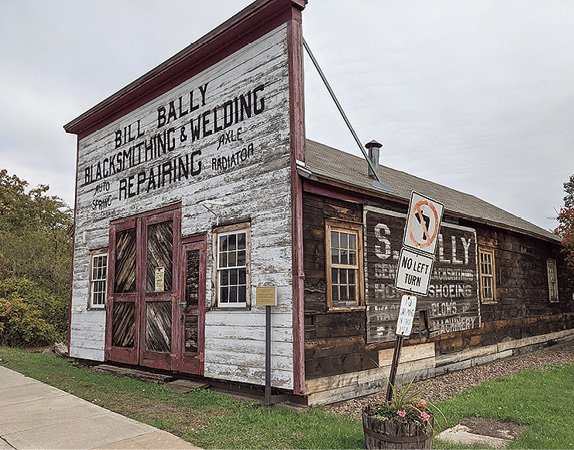 The shop was busy well into the 1990s, though Bill Bally kept it open on a part-time basis until around 2009. The Cook County Historical Society acquired the building in 2013. | SUBMITTED

For 110 years, the Bally Blacksmith Shop has stood at the corner of Broadway and 1st Street in Grand Marais. An active blacksmith shop for most of that time, today the shop is owned by the Cook County Historical Society, and a peek inside its doors reveals its history as the busy blacksmith shop that served the Grand Marais community for nearly a century.

It was 1903 when Sam Bally arrived in Cook County from Bayfield, Wisconsin. The lumber industry was in full swing in the Lake Superior region at the time, and Sam Bally came up with the Red Cliff Lumber Company which was logging near Grand Marais. Bally, who had previously owned a blacksmith shop in Bayfield, worked as a blacksmith for the logging company, though in 1911 he built and opened the Bally Blacksmith Shop.

Inside the shop, relics from the past tell the story of how the shop adapted to local needs during its 98 years of operation. The original forge is still in place, along with the anvil and the many tools that the Ballys used during their work. With the logging companies of the early 1900s came an abundance of horses to the area. The Ballys worked as farriers, shoeing the many horses that came through the shop. (A gouge out of one of the studs on the north wall reveals where horses chewed at the wood while tied up in the shop.) Alongside the horseshoes are runners for dogsleds, sawblades, and wheels from a Model T.

According to Wayne Anderson, a longtime Grand Marais resident and a friend and coworker of the Bally family, the Ballys were colorful characters and fiercely independent. Their work was integral to life in Cook County.

“Blacksmiths in those days were like the garage mechanics of today: you couldn’t get along without them,” Anderson said. “You had to have someone because much of what you used was handmade, and fashioned on the job, for the job. And that’s what the Ballys did.”

Many of the tools inside the blacksmith shop were made by the Ballys themselves for specific jobs they worked on. As time went on and horses were replaced by logging trucks and dogsleds by cars, the Ballys changed with the times and began working on trucks, cars, and other general repair. In addition to their blacksmithing skills, Al Bally was an electical engineer and his son Bill was a trained machinist. Throughout the changes, Anderson said they combined the use of modern machinery with traditional blacksmithing skills.

“They used the forge almost daily,” Anderson said. “If something came in and was bent a little bit, they’d warm it up a bit, and when it got hot they’d take it out and straighten it before welding it with a modern electric welder. But they still incorporated the forge into almost every job. They were old-world in a sense and modern in a sense, and very good at their craft.”

The shop was heated with a barrel stove, in which the Ballys did not burn wood, but old oil from the cars and trucks they worked on. However, the wooden building wasn’t insulated. Anderson remembers it being very cold inside, though he said that Al was used to it and usually worked wearing a cotton shirt and felt hat, with no coat. Remarkably, in an era when many wooden buildings burned to the ground, the Bally Blacksmith Shop still stands. In fact, it is one of very few original blacksmith shops that still exist in Minnesota today, though Anderson remembers one occasion when the independent Ballys had a run-in with regulators over fire concerns.

“Bill Bally was going to jack up the building and put in some work on the foundation. He had gotten a stop work order because he hadn’t gotten a permit—this was more than 50 years ago when there wasn’t much talk about permits,” Anderson said. “They said they needed to stop because it was an old frame building and was a fire hazard, but Al responded that of all the buildings in town this was about the only one that never burned. Afterwards the Ballys said that since they were raising the building without permission, they were convicted of shoplifting.”

The shop was busy well into the 1990s, though Bill Bally kept it open on a part-time basis until around 2009, 98 years after Sam Bally first opened the doors in 1911. Bill Bally passed away in 2010, and the Cook County Historical Society acquired the building in 2013. Today it is open to the public on Friday and Saturday afternoons in the summer, and for occasional blacksmithing demonstrations. 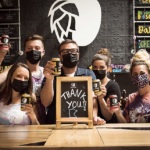