Right behind this big old tree is where the bungalow stood. | KIM CASEY

I will never forget when my partner and I moved to Atikokan. There was not a lot of places for rent but luckily for us, we were able to find a little bungalow on Gorrie Street. I had never lived in a small town before and the first thing that stood out to me was how quiet it got in the evenings. But even more unsettling was the feeling that Jon and I were not alone in the drafty two-bedroom house. My partner is one of those have-to-see-it-to-believe-it fellows, and unable to witness what I was sensing, he quickly concluded that my discomfort had nothing to do with a pesky spirit.

“Small town life is different than what you’re used to. But in time, you will come to like the slower pace,” he assured me.

But the feeling of being watched by an unknown presence intensified to the point that I took a risk and told my coworker what was happening.

“I know this is going to sound crazy. But I swear to you Cathy, that the ghost of an elderly man is in our house. I can’t see him. But I feel him around all the time. And he has the grumpiest of energies.”

She listened respectfully but offered no real response, so I just assumed Cathy thought I was losing my mind. But I could not have been more wrong.

The next morning, Cathy excitedly told me that she had shared my story with her spouse. He immediately remembered an old man living and dying in the house that Jon and I were renting. And he had had a reputation for being hostile towards the children in the area.

Grateful to have my suspicions confirmed, I could not wait to share this with my partner. Jon would not come right out and say that maybe he may have been a little hasty in dismissing my feelings. But from that moment onwards, when I would encounter something that he could not personally experience, he was far more receptive to my observations. And of course, he too was also right, because I did come to cherish living in Atikokan.

As for the ghost, things got much better there too because once I understood that it had been his house first, my fear of him vanished. And from that moment onwards, the ghost never went out of his way to make me feel unwelcome.

Go into stores in the fall and there’s often a proliferation of Halloween costumes, an overload of Halloween- themed home décor, and grocery store shelves full of Halloween goodies (from boxes of small bags of potato chips and tacos, to candy packets and mini-chocolate bars).

Climate change has influenced what children wear for trick-and-treating. The baby-boomer generation of parents, like many of us, remember when October 31 was often a harbinger of the coming winter weather—there would be nasty wind, chilling cold and drizzle. So, heading out for treats the children would wear an ‘improvised’ costume—large T-shirt or sports jersey over winter jacket topped by a hat (how could they not believe they looked like a princess, ghost or famous athlete?). And of course, the outfit always included a large pillow case to carry as a ‘loot bag’ (it would hold lots). Later, it was fun dumping the goodies and sorting out the ‘loot’ in piles. These days with climate change, Halloween weather has become much milder, eliminating the need to wear those bulky winter jackets.

One Halloween when my youngest daughter was still in elementary school, we decided to go all out to outfit her with a ‘real’ costume, yet at the same time keep her warm. We bought a sewing pattern for an elaborate cat costume to cover her from head to toe, purchased leopard-spotted warm fleece fabric and spent a week making the cat, finishing the night before Halloween. She loved it. (She’s since gone on to a career in western Canada, but the 30-year-old ‘cat’ still hangs in our storage closet.)

By the way, have the trick-and-treaters decreased in your area? At one time, we had about 150 coming to our door during the evening, happily yelling “Halloween trick or treats, please!” while last year there were only about 25. And the Halloween chant has now changed to simply “Halloween treats please!”

Some things haven’t changed. Before rushing to the next house, most still say ‘thank you’ after we drop the treats in their orange plastic pumpkin. It is also comforting to see parents still accompanying their children and keeping a watchful eye to goings-on.

Ah yes, these days we still buy enough treats for around 150 (an old habit so we won’t run out) but now we buy only goodies that we like so we can enjoy them as ‘leftover’ treats (potato chips and mini-chocolate bars rate high). 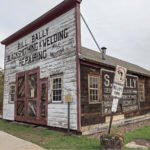 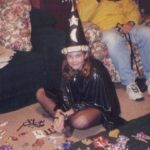