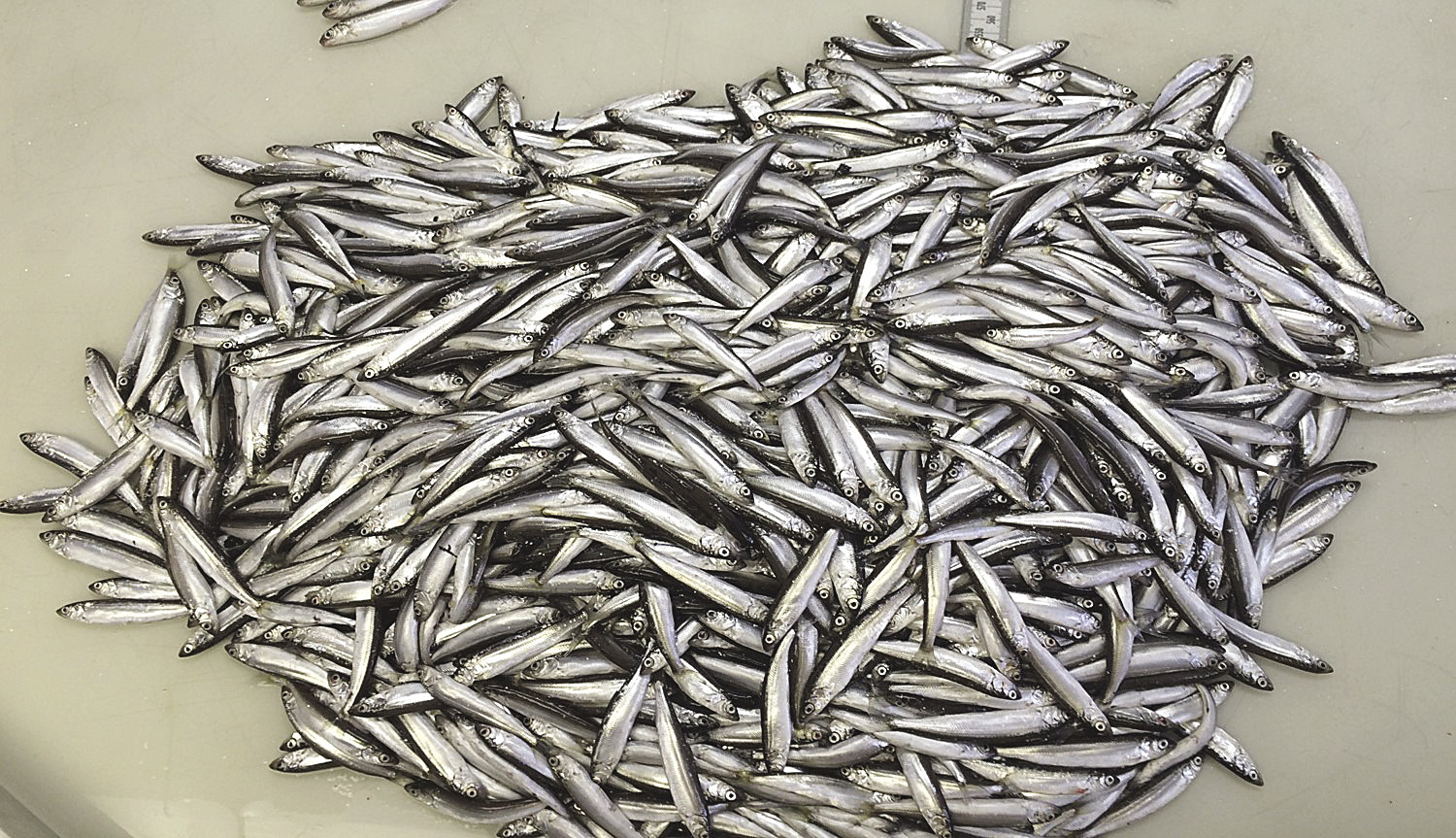 Under the assumption that each day is a unique adventure for a fish in Lake Superior, the chronicles of an adult herring found in the greatest of the Great Lakes must contain some amazing tales.

And Cory Goldsworthy believes he knows the reason why.

“Although herring are relatively small fish, they are long-lived, as are most fish species native to Lake Superior,” said Goldsworthy, the Lake Superior area supervisor with the Minnesota DNR. “We still see a few herring from the huge 1984 year class, which are now 31 years old.”

In Lake Superior, herring typically mature around the third year of life when they measure around 10 inches in length. Certainly it’s impressive that some herring in Lake Superior are able to survive for three decades, though most are lucky to endure the first three months of life. And the fact is, the herring in Lake Superior are in trouble. Numbers, both harvested by fishermen and in the population overall, are on the decline. This includes waters throughout the lake, stretching from Thunder Bay to Sault. Ste. Marie to Duluth and everywhere in between.

According to Mark Vinson, a station chief for the U.S. Geological Survey’s Lake Superior Biological Station in Ashland, Wisconsin, there are a variety of reasons for the herring fishing decline. At the top of the list are overharvesting of the fish, low recruitment of young herring into the population and the demand for herring roe in Europe.

“It’s a combination of issues, that’s what we’re finding,” Vinson said. “Right now it’s difficult to pinpoint one exact cause.”

The lake herring, or cisco, are an extremely valuable, and perhaps essential link of the Lake Superior fishery and its food chain. Ciscoes provided the largest commercial fishery on Lake Superior dating back to the 1940s, producing up to 19 million pounds annually in prime seasons. And while those numbers have dramatically declined, even during low-catch years, such as 2014 and 2015, fishermen harvested hundreds of thousands of pounds of the fish from Lake Superior. And that’s just in Minnesota waters. Throughout the lake, on average more than a million pounds of herring are harvested annually.

Ten years ago, herring harvested from Lake Superior were likely to end up as fertilizer or mink food in commercial processing plants. These days, the fish, or at least their eggs, often turn up on silver platters served at holiday parties in Sweden. Since about 2007, demand for herring eggs, also known as roe, has been in high demand in Scandinavian countries for use as caviar. This demand saw a sudden spike as result of decrease in fish populations similar to herring in Scandinavian waters, according to Vinson.

“Before the European caviar demand there wasn’t as big a fishery for herring over the last 20 years.” he said. “After their own fisheries crashed, they were looking for another source for that roe. And they came across Lake Superior.”

Vinson directs his studies on the research vessel Kiyi for the U.S. Geological Survey. The Kiyi does annual surveys of Lake Superior. Research teams on the vessel sweep trawl nets through the lake and count the fish they find. Some years there are lots of fish, but in recent years there simply aren’t.

“We try to keep track of herring populations,” Vison said, “especially when they are in younger ages.”

In terms of surface area, Lake Superior is the largest freshwater lake in the world. Among its many claims of notoriety is the fact it harbors stable populations of native fish species. However, in recent years the number of young herring that live to adulthood is dramatically declining.

Vinson and other researchers are currently studying what factors enhance survival of young herring in Lake Superior and what contributes to low recruitment or survival to adulthood.

“Those first three months are crucial and that’s what we are trying to focus on,” Vinson said.

Another reason for the population decline is the fact herring don’t have consistent regulations on fishing throughout Lake Superior. In Wisconsin, for example, commercial fishermen could catch as many pregnant lake herring as they were able to. In April of 2015, the Great Lakes Fishery Commission urged the state of Wisconsin, to reduce the harvest. It wasn’t until the summer of 2016 that the Natural Resources Board in Wisconsin approved an emergency rule to maintain cisco numbers in the Wisconsin waters of Lake Superior. After much discussion, the Wisconsin DNR said in August they worked with the state’s commercial fishermen to set a harvest quota of roughly 1.5 million pounds. That harvest quota took effect in October.

Harvest numbers aside, the water temperature in Lake Superior itself could be playing a role in the decline of herring in the lake. A combination of less ice forming on the lake annually and warmer water are areas researchers continue to investigate as they relate to impact the overall fishery of Lake Superior, Goldsworthy said.

“Water temperature impact to herring is quite difficult to put a finger on and seems to be quite complex,” Goldsworthy noted, “particularly for the early life stages.”

Along the vast shoreline of Lake Superior, there are numerous individuals and businesses whose very livelihoods depend on the quality fishery in Lake Superior. Among them are Steve Dahl, a North Shore fisherman with three decades of experience working on Minnesota waters.

“The numbers of herring out there these past few years in particular are low,” Dahl said. “That’s one thing that’s for sure.”

Dahl, like many other commercial fishermen who work the waters of Lake Superior, use gill nets that reach about 25 feet beneath the surface. Fish swim into their nets and the harvest is sold to local fish markets, restaurants and grocery stores. In the late fall, roe is collected to be exported. Most of the herring Dahl sells goes directly to restaurants in the Duluth area. The roe is transported up the North Shore to Dockside Fish Market in Grand Marais, where it is then exported to Scandinavian countries such as Sweden.

Harley Toftey, who runs Dockside Fish Market, leases space each fall to an Iowa company called Interlaken Fisheries. Interlaken hires contracted employees and uses some of its own staff to process the roe and prepare it to be exported.

In addition to the market, Toftey is also a commercial fisherman. He said 2016 has been plentiful with fish for the Grand Marais market, including herring.

“We had a pretty good summer up here,” Toftey said. “That’s the thing about Lake Superior. It can be a big mystery some of the time. One area will be doing great, and the next year it won’t. And some year classes are extremely solid, and then we get reports and see that other years just aren’t.”

Dahl fishes from April to mid-December each year, though he makes more than 40 percent of his annual income during the November herring spawn. But each year seems to be more unpredictable, and many commercial fishermen are either braving the decline or abandoning operations altogether.

“We’ve had some rough, strange falls as far as fishing goes,” Dahl said.

And while the decline of the herring population in Lake Superior certainly impacts various aspects of the human lifestyle, it also hurts other species of fish in the lake. Whitefish eat herring eggs and ciscoes are also an important food source for salmon and lake trout.

Like many population declines in the natural world, there are often a variety of factors involved. Vinson, Goldsworthy and many others working in the field will continue their efforts to piece the complex puzzle together. Though everyone interviewed agrees that when it comes to herring in Lake Superior, it seems recruitment, or lack thereof, and overharvesting by some commercial fishermen are playing a role in its decline.

And while an adult herring can indeed survive for more than 30 years in the clear waters of Lake Superior, the chances of such feats happening in the future continue to become less transparent.

“I don’t think it’s fair to say anyone knows exactly what the answer is,” Dahl said. “We need to remember that we’re all kind of in this together.”

The Ups and Downs of Ontario’s Deer Herd

Venison: from the Exotic to Classic Sausage Making