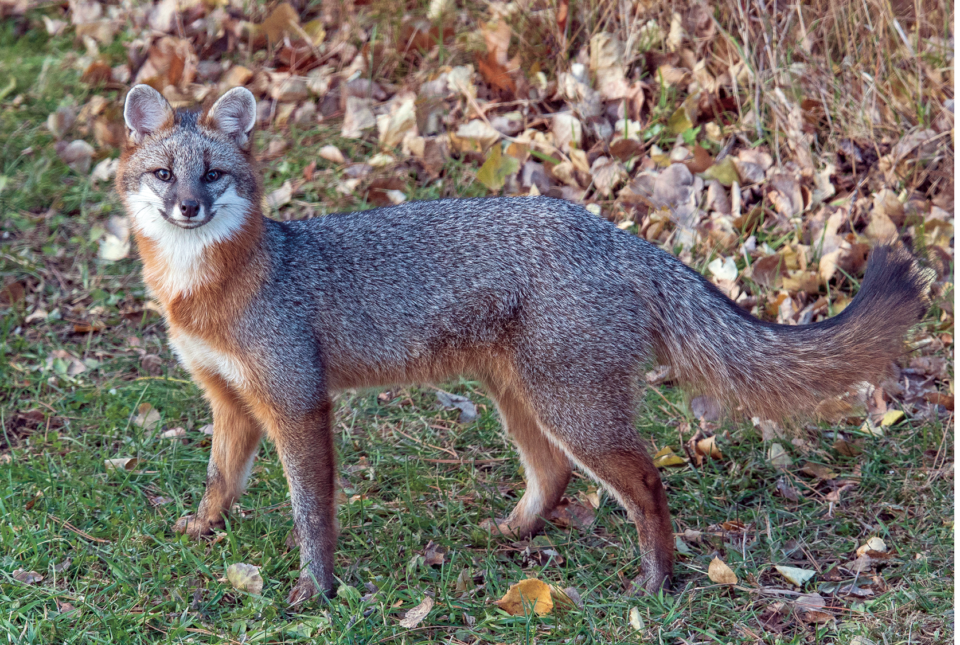 A southern migrant has quietly taken up residence in the Northern Wilds. No one really knows where this migrant came from or how long it has been here. Keeping a low profile, it has received little attention from its human neighbors, who most often see it when it appears in their backyard. But it appears the diminutive gray fox is here to stay. And biologists want to know more about it.

“The first record of a gray fox in northwest Ontario was near Fort Francis in 1944,” said Rob Foster, co-lead of the new Gray Fox Project for the Thunder Bay Field Naturalists. “There were only eight or 10 records prior to 2010 and none in the City of Thunder Bay.”

Foster said that in 2013, a gray fox began showing up at a bird feeder on the outskirts of Thunder Bay. Then a pair of them was seen. In 2015, someone took a picture of a lactating female, indicating the animals were likely breeding. As a growing number of reports trickled in, the TBFN decided it was time to begin gathering information about local gray fox to establish a population benchmark. They reached out to the public and asked them to place trail cameras near their feeders, which attract gray fox, especially in winter. The project had surprising results.

“Lo and behold, there were a lot more out there than we originally thought,” Foster said.

In the last year, TBFN has received more than 30 observations ranging east to Pearl and north to Ignace. They have been able to confirm successful breeding. They’ve also identified more than a half-dozen locations on the periphery of Thunder Bay where the animals are consistently seen. A pair lives beneath a backyard shed in urban Thunder Bay.

So, what is a gray fox? Somewhat smaller than the more common red fox, the gray fox is found from northern South America to roughly the middle of North America. The gray fox has a grizzled gray back and flanks with a black-tipped tail and reddish chest. They have a more cat-like face than a red fox. They are a separate species, unlike the cross and silver (black) fox, which are color variations of red fox. They are the only North American canid that routinely climbs trees and may even den in them. Foster said there is a local video showing a gray fox eating crab apples from the upper branches of a tree.

The next step is to use hair snares to collect gray fox hair samples to compare DNA from individual animals and possibly with hair samples collected in Minnesota. Foster hopes to recruit a grad student to do further research.

In Minnesota, interest in learning more about gray fox in the north is growing. Minnesota DNR research scientist John Erb said he never saw anything but red fox when he moved to the Grand Rapids area 22 years ago. During the last 10 or 12 years he began seeing gray fox in the area. A trail camera study in northern Itasca County a few years ago found gray fox were common predators. Data from trapping harvests in the state show gray fox are mostly taken in the bluff country of the southeast and in the transitional zone between the northern forest and the prairie, which crosses the state diagonally from the southeast to the northwest. Recent statewide annual gray fox harvests have been about 400. During a boom in fur prices in the mid-1980s, 4,000 to 6,000 were trapped each year.

Erb said he believes gray fox have become well distributed in the northern forest. He isn’t sure why they seem to be moving northward, but milder winters and extensive timber harvest that creates younger forests with more openings likely play a role. Their expansion at least anecdotally parallels the northward push of bobcats, likely for similar reasons. At the same time, two northern predators, fisher and marten, are declining in numbers, possibly because they prefer cold climates and older forests.

“The increase in bobcats and the decrease in marten and fisher seems tied to long term change in forest age types,” Erb said.

Gray fox may also benefit from the presence of wolves in the north. Wild canids have a pecking order: Coyotes are intolerant of fox in their territory and wolves are intolerant of coyotes, but don’t bother fox. Wolves almost certainly limit coyote numbers in the north. Another advantage for fox is the north has low numbers of raccoons. Where raccoons are abundant, they can become infected with distemper, which spreads to fox.

Gray and red fox seem to tolerate each other. Erb said he hears from trappers who catch both in the same set. The abundance of both species seems to follow the population ups and downs of red-backed voles, a favorite prey.

While Erb is paying attention to gray fox and they are included with other predators in fall scent station and winter track surveys, he is frustrated that much of what is known about them in Minnesota comes from anecdotal information.

“The gray fox is a species that is on my list to propose for research so we can learn a little more about them,” he said. 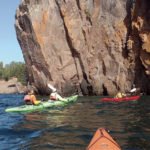 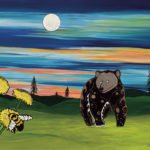 Makwa and Aamoo (Bear and the Bee)