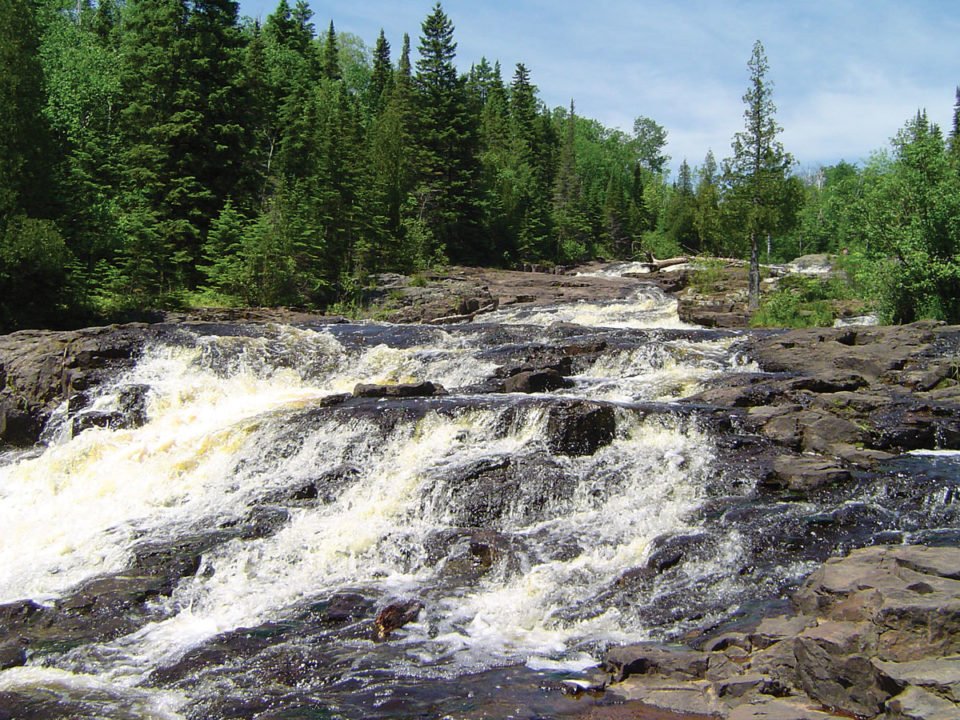 Glen Avon Falls is a gem–an Elizabeth Taylor-sized gem—little-known to the casual North Shore traveler, but apparently very well-known to anglers and yellow swallowtail butterflies. Park and walk about 40 yards across exposed red rock outcrop to the river’s edge.The Beaver River saunters placidly along to this juncture, only to widen into a dramatic drop over an awesome run of over 100 tumbling yards, down and down over broad rock shelves. The river then narrows, pausing placidly at the bottom in a slow, drifting whirlpool before continuing on its way. The vista is picture postcard perfect, set in a broad valley with a distant emerald ridge shielding Lake Superior from view and adding dramatic background and depth.

This area offers a great opportunity to explore. Head left on a dirt (sometimes mud) path to gain access a bit farther down-river and onto the wide rock terraces. Looking upriver, you will see that a 50-foot wide section of the river is caught up by a horizontal rock ridge, marked by a mysterious three-foot notch in the rock bank across the river, just at water-level. The ridge channels the flow perpendicular to the prevailing current until it is released again at a right angle, through a six-foot wide passage, after which it again splays wide, then splits around a craggy island.

This waterfall is part of a mystical terraced domain, populated with twisted old cedar trees. See if you can spot the lichen-encrusted queue of them, guarding a rock throne, shaded with three species of conifers. A natural series of steps leads up from a small back-water pool to the dais, which is flanked by an ancient cedar, standing on its aged, pinched roots, while it leans upon a younger, straighter tree for support–the old guard watching over the young. Look also for secret side-falls–places where rivulets have found their way over and around the fractured rock formations. 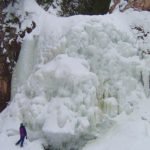 Caribou River Falls: Hiking to a Frozen Waterfall in Minnesota