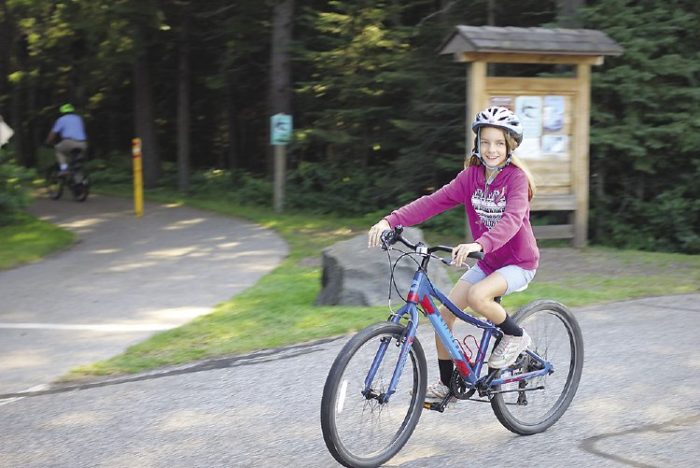 When completed, the Gitchi-Gami State Trail will span all 89 miles from Two Harbors to Grand Marais. | GGTA

Lutsen—The cool breeze off Lake Superior nudges the cyclists along as their path imitates the curves of North Shore’s Highway 61. As of now, cyclists, walkers, runners, rollerskiers, and other outdoor enthusiasts can enjoy just over 30 miles of non-motorized, paved, segmented trail between Gooseberry Falls State Park and Grand Marais. Winding its way next to the main roadway in the Arrowhead region, the scenic trail passes through birch and aspen forests, past multiple waterfalls and state parks, and allows for occasional beach access. When completed, the Gitchi-Gami State Trail will span all 89 miles from Two Harbors to Grand Marais.

The trail enthusiasts of today can thank the resort owners and community members of the late 1980s and early 1990s for starting the discussion about a separate non-motorized trail along Highway 61. The North Shore Touring Trail Association ran with the approval of the Minnesota Department of Transportation in 1996 and began the concept discussions. Three years later, the group renamed itself and the trail; Gitchi-Gami Trail Association and Gitchi-Gami State Trail, respectively.

The Gitchi-Gami Trail Association, an all-volunteer nonprofit, is working with the Lutsen Township to design the extension of trail from where it currently ends at the Ski Hill Road to the town center area, approximately 1.5 miles east along Highway 61.

Public trail planning has included three meetings in the past handful of months, each with its own component. First was the town of Lutsen concept designs, followed by a wayside design for a potential trailhead/wayside rest at Ski Hill Rd and Highway 61 (a privately owned area currently, the concept design demonstrates what could happen if this land is acquired by the State), and finally trail design and placement for the trail between Ski Hill Road and Caribou Trail. Approximately 20 stakeholders and interested members of the public attended each of the three meetings.

“What struck most is that the community sees value in the trail—a safe place for people to get to and from work and to town amenities, and beyond to the State Parks. Many times it was mentioned that this trail could serve as the ‘Lutsen sidewalk’ and it was mentioned that the trail itself could help bind the town,” says Pierson. “It was brought up that the Town of Lutsen lacks real visual unity, and the trail could be something that gives the town more distinctiveness.”

Though various orientations were considered, it is expected that this segment will be on the inland side of the highway. The culvert box tunnel crossing nearby brings users to the inland side, and the expense of a duplicate tunnel feature likely makes another crossing cost prohibitive. Though no funds have been acquired to purchase the property at the Ski Hill intersection, nor to engineer nor build a trailhead, other feature ideas tackled as part of the Lutsen Concept Design Project included parking, RV/trailer parking, and (if plowed) a snowmobile trailhead. The discussions also included a picnic shelter with optional vault toilets, areas for historical interpretation, landscaping ideas to minimize impact on the Poplar River and other elements.

Pierson explains that the Minnesota Department of Natural Resources currently owns and maintains the trail. The funds come from a Federal Transportation Alternatives grant for $600,000 to be used for construction costs—slated to begin in summer/fall 2021—as well as grant matching funds for the final design and engineering of the trail.

“Those funds were awarded by the State through the DNR’s request to the LCCMR program (Legislative-Citizen Commission on Minnesota Resources),” says Pierson. “In total there is just over $1 million secured to build as much trail as that can build to get into Lutsen’s Town Center corridor.”

“We are happy to help build momentum for biking the shore, and are pleased that the USBR#41 designation offers more opportunity to promote biking along the shore,” explains Pierson. “We’ve heard from some USBR#41 riders that they love the trail, and hope that the designation can be a driver to promote the advancement of the trail.”

Other construction plans are running concurrently with the proposed Lutsen segment. Later this year trail corridor preparation for the Grand Marais to Cutface portion is scheduled to commence, with the work planned through the middle of 2020.

Though there isn’t currently a projected date for the completion of the full trail, the existing portions are unique and satisfying in themselves. More information about the Gitchi-Gami State Trail progress and plans, the Annual Ride in August, and ways to support the trail can be found at: ggta.org. 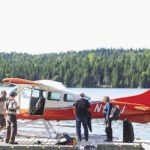 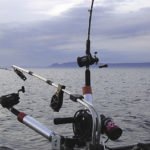