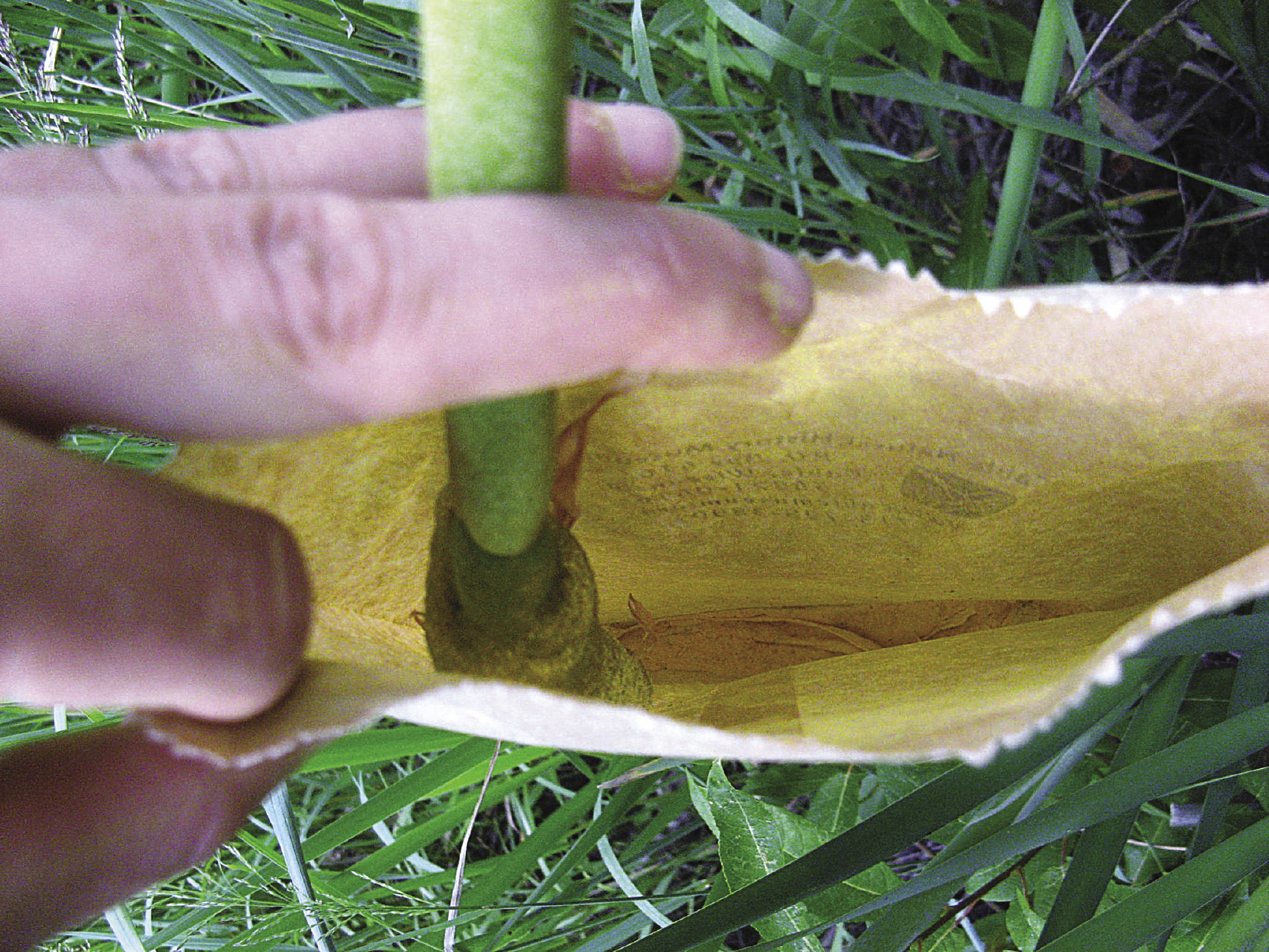 North Shore—Starting around the Fourth of July, I begin watching my local cattail marsh like a hawk. Slowing my car and rubbernecking shamelessly, I search through the sea of green.

As summer heats up, cattail flowering stalks begin to emerge shyly out of the tight bundles of leaves. Signs of this emergence are what I’m scanning for. The stalk is round, and the top is sheathed in leafy green husks like an ear of corn. If you peel back the husks, what you’ll find looks like a pair of skinny green hot dogs on a skewer—ready to roast. Corn-on-the-cob and broccoli are two of my favorite vegetables, and cattail flowers combine the best of both worlds.

The top dog is the male flower spike. The lower hot dog contains female flowers. Later in the month, the male flowers will erupt in a cloud of yellow pollen, which drifts on the wind to female flowers. Once the pollen is gone, the part of the stem that held the male flowers often dries up and falls off. The female flowers develop into thousands of tiny seeds, each with its own fluffy parachute. They are the classic, big brown cylinders you see in autumn marshes, which burst open in a mass of fluff over the winter.

If you run your fingers down the stalk, you can feel the joint between the male and female flowers, even inside the husk. To harvest your dinner, simply break off the male flower spike at the joint and stick it in whatever bag, sack or pocket you have handy. I’ve found that dinner guests tend to eat about six spikes apiece before the novelty wears off.

The cooking process is remarkably like sweetcorn: remove the husk, boil for 10 minutes, and eat with butter and salt. The half-inch diameter vegetable tastes a little like broccoli, which is a flavor I often describe as “green.” It is composed of thousands of tiny flowers packed around a slender center “cob.” I sometimes nibble at them from the side like you would corn, but I’ve also held the flower spike in my mouth like a cigar, clamped it in my teeth, and pulled the flowers off of the cob that way. You can even scrape the florets off the cob and bake them in a casserole. Cattail flowers are my favorite wild vegetable.

Cattail flowers quickly progress from the husked spike stage to the bursting-with-pollen stage. A benefit of this phase is that the bright yellow flowers show up well against the green, so spotting them is easy. The pollen is a tasty and protein-rich addition to any baked good. Just bring a paper lunch bag with you to the marsh. You can tip the powdery flower spikes inside the bag and give them a good shake to knock the pollen off.

I’ve sometimes processed the pollen painstakingly with a wire mesh strainer and several siftings to remove the bugs. Recently, though, I’ve decided to embrace all but the biggest bugs as just another source of protein. They are really too small to worry about. Aim to collect at least a quarter of a cup of pollen. You can add it to just about any recipe for pancakes, cookies or biscuits, and it will impart a lovely yellow color to the batter.

If you miss both the broccoli-on-a-cob stage and the golden flour stage, you can still find a treat to eat in a cattail marsh. Just squish or paddle up next to a cluster of cattail leaves, and grasp the center leaf as close to the base as possible. By tugging with firm, even, pressure, you can coax the leaf to slide out of its holster. Go ahead and nibble at the tender, white base. It tastes like cucumber and is a refreshing snack on a hot day.

I’ve been warned about giardia enough times that I’m always a little wary of eating something that’s been in contact with lake water. I’ve learned, though, that the bases of cattail leaves are covered in antimicrobial gel that protects the plant from microbes and from drying out during water level fluctuations. So, I’ll keep eating cattail leaves that weren’t submerged in muck, and believing that the gel kills giardia, too.

Some people harvest the cattail’s starchy roots and rhizomes, which are available year round. That’s too much work for me. The flowering spikes, pollen and leaf bases are all tasty and easy to collect wild foods—I’ll stick with those. Bon appétit! 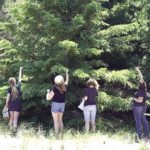