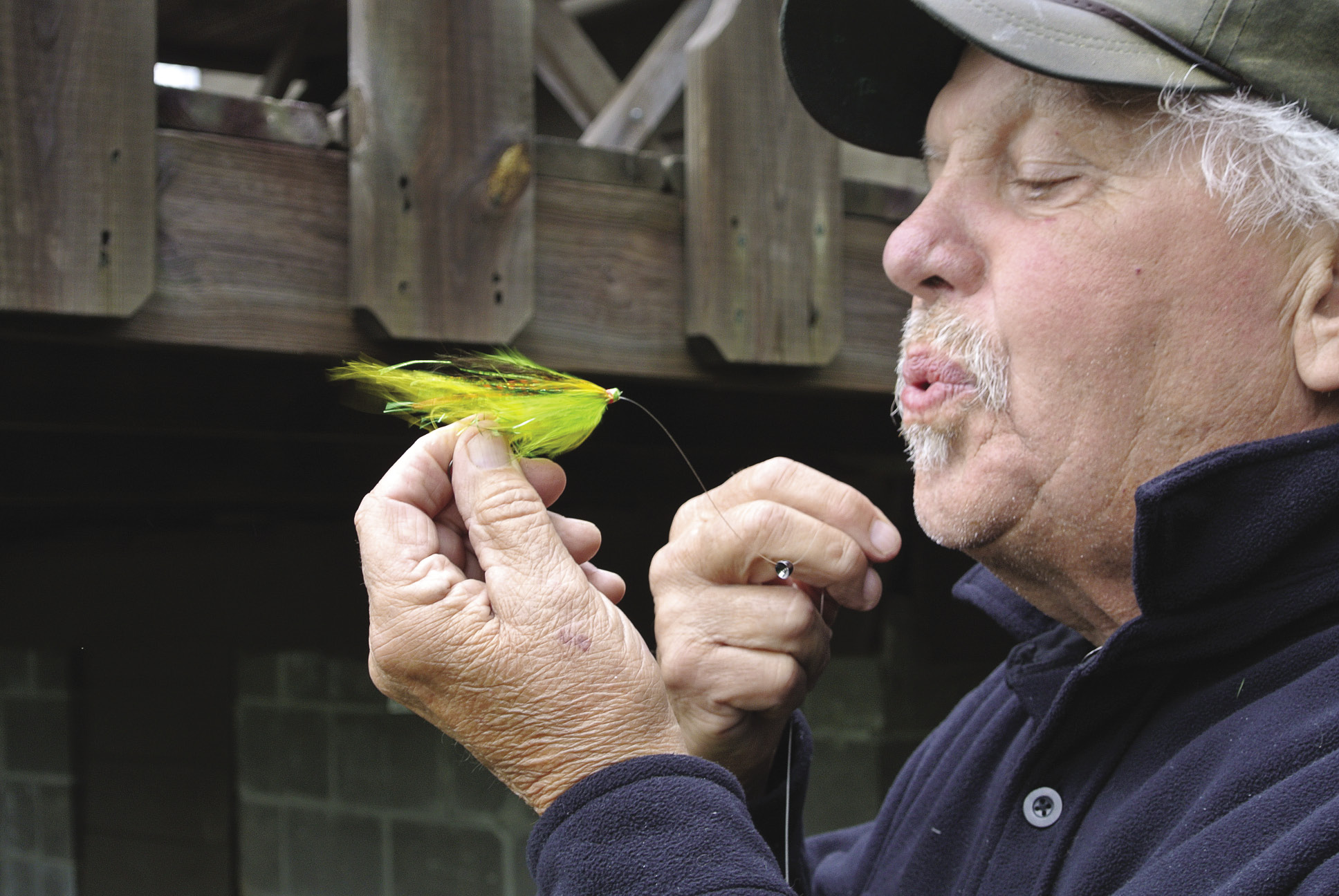 An accomplished fly caster and fly tier, Bob Nasby was recently inducted in the National Freshwater Fishing Hall of Fame.

When the arrangement was finalized for Bob Nasby to visit the Gunflint Trail for a few days of fishing this summer, I envisioned a man showing up wearing an Orvis fishing hat, the trendiest $300 fishing vest available and weatherproof pants, with the word Patagonia emblazoned on them.

After all, Nasby was a fly fisherman. A hall-of-fame, legendary, one-in-a-million type of fly fisherman, in fact.

However, much to my delight, Nasby showed up to Rockwood Lodge & Outfitters, located on Poplar Lake, wearing dirty jeans, an old sweatshirt, well-worn boots and looking overdue for a shave.

He looked like the type of fly fisherman I always wanted to be.

“This whole elitist concept behind fly fishing is nonsense,” Nasby said. “That secretive type of stuff, that behavior of being some kind of holier-than-though type of angler is complete junk.”

I learned the ropes of fly fishing in Missoula, Montana. My first trout on a fly rod came out of Rock Creek, just east of Missoula. During my collegiate days at the University of Montana, it was not uncommon to see people walking across campus with fly rods in hand.

But in Minnesota, it’s often a different story. Diehard fly anglers like Nasby are not commonplace, though fly fishing is popular along the North Shore and in southeastern Minnesota. Head over to Leech Lake, or Mille Lacs, and you’ll be lucky to spot a fly angler on any given day. Throughout the Midwest, Nasby explained, there remains an intimidation factor when it comes to fly fishing.

“Look,” Nasby continued, “there are so many theories on fly fishing that if you listened to them all you’d probably never go. The reality is, find out what is comfortable for you and go out there and try to have some fun.”

Nasby has been fishing for most of his life. His father died during WWII and Nasby’s mother was left with three young children to care for. The family moved from house to house, depending on where they could afford. Most of their homes were north of the Twin Cities, such as Forest Lake and other nearby towns. But wherever they moved to, Nasby’s mother always made sure there was water nearby. Fishing became a means of eating, not just a way to pass a casual summer day.

“I was about five or so and bringing home buckets of bluegills and bullheads for us to eat,” Nasby said. “Sometimes we ate them for breakfast, lunch and dinner.”

Never keen on educational institutions, Nasby decided his schooling days were over after eighth-grade, opting instead for an early career in the military.

“I was one of those rarities who joined the Air Force even though they hate flying,” he said.

After his time in the service was complete, Nasby worked for a time in the iron industry. The days were long and the work brutal, and eventually Nasby realized fishing needed to be more than a hobby. So in the late 1970s, he opted to turn it into a profession. And for the next 30-plus years, Nasby has done just that. During the past three decades, he has guided fishing trips from the Gulf of Mexico, to the North Shore, with most of his guiding time spent on the St. Croix River, about 15-miles east of his home in St. Paul.

The work of a fishing guide isn’t always easy. Clients occasionally arrive with outrageous expectations. There can be rain, wind and all manner of natural elements to face on a daily basis. Being a fishing guide in Minnesota takes a certain toughness, and in Nasby’s case, perhaps this can be traced back to his now-deceased mother, who at age 92 once called him at 5:30 a.m. and insisted on going to the casino.

“Move it or lose it, Bob,” she simply stated.

Now 76 and coming off a recent knee-replacement surgery, Nasby isn’t the everyday, hardcore angler he once was. However, his career is not without its accomplishments. His service and expertise as a fly fishing guide and casting instructor landed him in the National Freshwater Fishing Hall of Fame earlier this year. Nasby has tied thousands of flies over the years, built rods, landed trophy fish from Lake Michigan to the Atlantic Ocean and essentially mastered the St. Croix River as a fishery. The first two fish to ever appear on Minnesota’s trout stamps, back in the early 1980s, were both caught by Nasby. His credentials go on and on with continued brilliance.

And yet, it was a statement Nasby declared within the first 10 minutes of meeting him that put me at ease.

“The people I like to fish with know how to have fun when we’re not catching fish,” he said. “And most of us swear and chew Copenhagen.”

Dennis Anderson, an outdoor columnist for the Star Tribune, has often witnessed what makes Nasby so dynamic as a fisherman, guide and casting instructor.

“Although he’s well known in fly fishing circles, Bob Nasby lacks the media visibility of other Minnesota fishing greats such as Al Lindner,” Anderson said. “Nevertheless, Nasby is among the state’s all-time best and most passionate anglers  — intent not only on figuring new ways of catching fish, but on teaching others how to catch fish, as well.’’

Nasby and I spent several days chasing lake trout, smallmouth and northern pike around several Gunflint Trail lakes. With Nasby in the bow, I did my best to put him on fish from the comforts of a Spirit II canoe. The fishing was mediocre, but Nasby’s presence was sensational. Fishing with Nasby is like spending a day with Nolan Ryan if you wanted to learn how to throw fastballs, or Wayne Gretzky if you desired knowledge of hockey. Nasby talks of nothing but fishing, though he does slide in the occasional R-rated joke. He rockets his casts behind boulders, or into thick brush you’d think meant certain doom, only to see him sneak his fly back to the water, making it seem planned all along.

Lakes along the Gunflint Trail hold an abundance of lasting memories for Nasby. There was the time he showed up to guide someone on Kimball Lake, only to have a bear literally crawl inside the back of his pickup and eat most of his food, (Nasby was sleeping in the truck’s cab at the time). About 20 years ago on Birch Lake, Nasby said he was moved to tears watching his grandson make the perfect cast while they pursued rainbow trout. Nasby knows all types of people along the Gunflint, and is quick to share stories of outlaws, loners and fantastic anglers. However, the reason he continues to visit and fish the Northern Wilds is for the serenity he feels upon arriving.

“It’s the beauty up here,” he said. “The quietness of it. The lack of crowds.”

Despite his penchant for gruffness, Nasby maintains a certain innocence about him. When he shared a story about his mother on her deathbed, he said chills shot up his spine.

“Just a couple days before she passed,” Nasby said, “she looked at me and said ‘remember Bob, fight, fight, fight.’”

During our final hour spent on Poplar Lake chasing fish, Nasby missed what must have been an 18 or 19-inch smallmouth. The episode happened after one of those perfect Nasby casts, the type where his yellow popper with the red skirt landed just inches from the shoreline. After two strips of his line, a magnificent fish lunged at his fly, only to miss its target. Almost instantly, the fish returned, and again it missed, this time showing its thick bronze back.

After a third charge from the fish failed to place the hook where it needed to be, the fish vanished to the depths of Poplar Lake. Nasby sat with his shoulders slumped in the front of the canoe. The hall-of-fame fisherman had been defeated that night, proving that no level of expertise assures every fish will be caught and landed.

“That’s why I keep coming out here,” Nasby said later that evening. “It’s those stories of the ones we miss that are often the most interesting. And you know what, just being out here for another day is what this is still all about.” 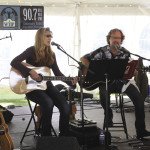