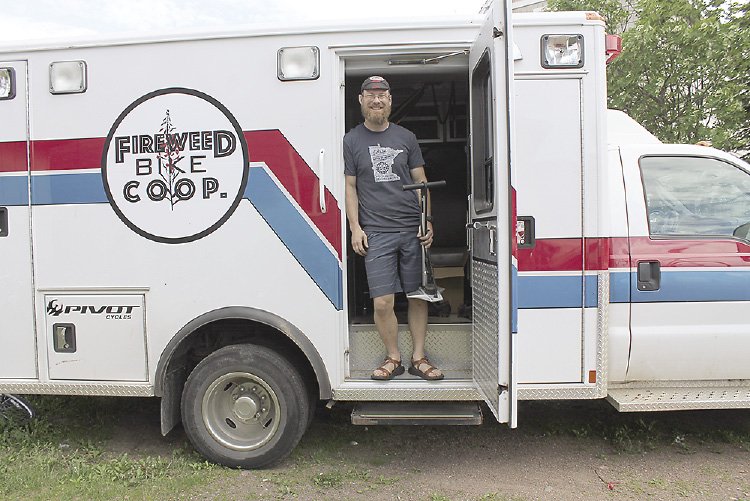 Grand Marais—The Fireweed Bike Co-op at 13 South Broadway Avenue in Grand Marais offers “rental, repair and service” of bicycles. The bike co-op does not offer medical services—although when this reporter stopped by for an interview, shop owner Jay Arrowsmith DeCoux was providing a bandage for a young client who had taken a spill.

And there is that…ambulance parked out back.

Fireweed Bike Co-op’s Arrowsmith DeCoux laughed as he explained the story behind his mobile bike shop. He calls the custom vehicle his “wham-bulance.”

Although Arrowsmith DeCoux said there is “kind of a cool factor,” in having a retired ambulance in which to haul bicycles, the decision to use a revamped ambulance came down to finances.

When Arrowsmith DeCoux became owner of the local bike shop in 2017, he realized, like so many other Cook County residents, he would need more than one job to survive on the North Shore. He needed to diversify. And he knew what he wanted to try—a mobile repair and rental service.

Arrowsmith DeCoux knew just what he needed in a vehicle. It needed to be big enough to shuttle many bikes. It needed to have space to outfit it with all the tools needed to serve as a mobile bike shop. And it needed to be eye-catching with a “cool factor.”

So, Arrowsmith DeCoux set out to find something big enough, reliable, preferably 4-wheel drive to accommodate winter bike races and ideally, under 150,000 miles. It was a challenge. He considered several 15-passenger shuttle vans, but, he said those were “screaming expensive.”

The ambulance was just about perfect, Arrowsmith DeCoux said, needing very little modification. He had Northern Wilds add some red and blue racing stripes and Fireweed Bike Co-op graphics. He added a front rack to transport four bikes and a hammock for overnight road trips to races.

There is plenty of room inside for a generator, air compressor and bike stand. “It’s its own self-sufficient space,” he said.

The “whambulance” has become a fixture at numerous races—the Lutsen 99er, Sawtooth Mountain Challenge, LeGrand du Nord, Heck of the North and the Gitchi-Gami Biking the Shore event.

And what does it cost to have your bike repaired at one of these events? “No charge,” said Arrowsmith DeCoux.

He said the revamped ambulance, filled with bike repair tools, is a tool to promote Fireweed Bike Co-op. He offers demonstrations and makes repairs with no fees. “It’s tip-based,” explained Arrowsmith DeCoux, and added, “People are very generous.”

How does Arrowsmith DeCoux know what supplies to have on hand? An avid racer himself, he said, “I can kind of predict what will be needed. I can guess what could go wrong.”

The bike ambulance gets used at more than just races. In between events, Arrowsmith DeCoux offers shuttle service to area trails for riders with their own bikes or with rentals from Fireweed Bike Co-op. He places bikes on the front rack or inside the ambulance compartment and delivers them to riders all along the North Shore, from Duluth to Grand Portage.

However, his most popular delivery spot is the scenic Pincushion Mountain Trail System overlooking Grand Marais. He said many people want a lift up the hill so they can take the challenging ride back down. 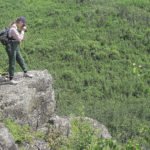 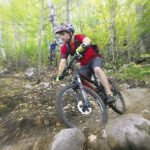