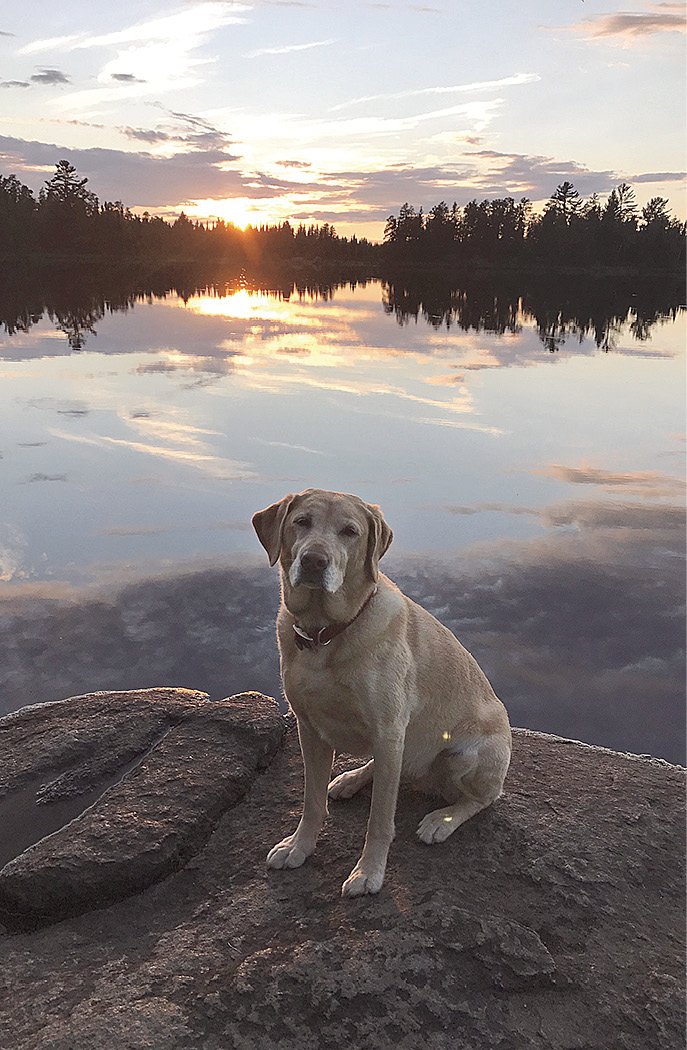 During our mid-September adventure into the Boundary Waters, my yellow Lab Rose was the perfect companion. | DAN RUSSELL

I was sitting on the rock shelf by the shore enjoying the end of another day in the BWCAW, when I glanced to my left. My yellow Lab Rose was sitting quietly. She had joined me to watch the sunset.

I had just retired after 28 years on the job and Rose and I headed to the border for six days, to relax, reflect and hopefully catch a few brook trout. Many of my co-workers had written notes for me to read around the fire. Most evenings I would pour a camp cup of Red Breast Irish Whiskey and read a few of their messages. All were heartfelt and a few brought tears. Several were quite clever. One was written on birch bark to use to start a fire, another on toilet paper.

One night Rose and I stayed up late listening to the wolves howling across the lake. Another night we crawled into the tent at 7 p.m. with a pot of mac and cheese just before an all-night thunderstorm rolled down the lake. We did not emerge until seven the next morning when we were greeted by a crystal blue sky. Most days we would hike into my favorite brook trout lake to catch our dinner. I would toss out a bobber and watch her chase frogs along the shore.

During our mid-September adventure Rose was the perfect companion. She never complained, didn’t talk much and always cleaned her plate. After 30 plus canoe trips with Rose, I would like to share a few tips for others who would like to bring their best friend to the BWCAW.

First, if you are unable to control your dog, please do not bring it to the BWCAW. If your dog can’t be off leash at home, leave it at home. Other campers want to hear loons call, not dogs bark. And they certainly don’t need a strange dog yipping at their heels on a portage with a canoe and a Duluth Pack on their shoulders.

I always have my dog sit in front of me in the stern of the canoe and always wearing a collar so I can control her with my hand. Never tie your dog to the canoe. I load my canoe first and have the dog jump in just before I leave a landing. There is more of a risk of capsizing with a dog in the canoe so whenever possible I paddle near the shore, especially on solo trips. A good idea anyway as it is not only safer; there is more to see.

Bring extra in case you are wind bound. Pack the food in several different bags. Not that your well-trained pet would ever snuffle into your pack, but your camp mouse or chipmunk would love to. Follow the Forest Service rules, pick up after your dog and always leave your campsite better than you found it.

Dogs, hooks and a flopping walleye in a canoe is a bad combination. Try to find a campsite where you can fish from shore. Depending on the time of year there always seems to be a walleye, northern or smallmouth that would like to join you and your dog for dinner.

I have never had a bear in camp when I have had a dog with me, but I still take the same bear precautions. I do try to pick a campsite on an island, not that it would deter a hungry bear, but it does give a sense of comfort that your pup has less room to wander off.

I personally have not seen a wolf on a summer trip but judging from stories there is a concern. If a wolf will attack a dog in Grand Marais, why not on Saganaga Lake? Here again, the dog needs to stay near you and your campsite. Twice in the last few years during winter trips I have spotted a wolf. Rose pulls the sled, so I am sure they were following her trail down the lake. Both slowly veered off when they were about 300 yards away.

I was six years old when I first headed up the Gunflint Trail. Sixty years later I have not lost the same sense of awe and wonder I felt then for this magical place.

I can only imagine the BWCAW though Rose’s eyes. 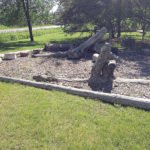 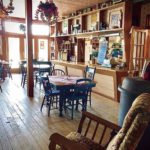