Are you interested in getting weekly deliveries of local, organically grown fresh vegetables direct from the farmer this summer?

Well, you’re in luck, because each of the three CSAs which grow vegetables for Cook County residents are still taking subscriptions for the upcoming season.

CSA, or Community Supported Agriculture, is admittedly an awkward term, says Nick Wharton who, with his wife, Kristin, run the Good Nature Farm.

“It’s an attempt to capture the idea that the customers, or members, are directly supporting the farmer,” he said. “There’s no middle man. It goes directly from the farmer to the consumer. And members share in the risk, so they share the good and the bad.”

Members purchase annual shares in a CSA, and a bag, box or cooler full of fresh produce is provided to them each week during the growing season.

CSAs are different, too, depending on the participant farmers and the area where the food is being grown. But they all share a commitment to sustainable, organic farming and growing food for the local community, said Melinda Spinler.

Spinler, Jeanne Wright and Eric Hahn currently grow for the Cultivating Community CSA. This is the ninth year for the CSA, and it has grown each year, Spinler said.

Part of the reason is the experience she and her fellow growers have garnered over the years, but it’s also because they are increasingly incorporating season extenders, like green houses, into their farmsteads, Spinler said.

Last year, for example, all of the Cook County CSA growers, including Wharton, received grants from the USDA through the National Resources Conservation Service to build 20-by-48 foot greenhouses on their land. They are “huge” greenhouses, Spinler said, and will greatly increase their productivity in the coming years. This year, Cultivating Community will grow for 25 families. The CSA still has a few openings, as does Wharton.

The “grandfather” of all CSAs on the North Shore is Round River Farm in Finland run by Lisa and David Abazs. This is their 13th year of operation, and so far this season, 42 people have signed up for shares. “We’re still taking people,” Lisa Abazs said.

Although the farm is located in Finland, they deliver boxes of fresh produce to the Birch Grove Community Center where they can be picked up by their subscribers.

In the case of the Round River Farm, the first vegetable box will be sent out the first Thursday in June and continue through the end of September. The Cultivating Community CSA delivers for 15 weeks, and Wharton’s Good Nature Farm, which celebrates its third year as a CSA this year, delivers for 13 weeks. The price varies according to the length of time vegetables are delivered, but averages around $25 a week.

The list of things these growers provide makes your mouth water: lettuces, greens, bok choy and radishes in the early spring; broccoli, cauliflower, early carrots, cabbage and peas in early summer; cucumbers, peppers, tomatoes, onions, green beans and summer squash in mid- to late summer; potatoes, winter squashes, storage onions, kale and carrots in the fall, just to name a few. The list is endless and varies with each CSA.

Some of the growers also have chickens, so that subscribers can get eggs if they wish. And, more often than not, subscribers are invited to visit the farm, see where their food is being grown and meet the farmer.

For more information on Round River Farm, visit www.round-river.com. Information on Good Nature Farm can be found at www.facebook.com/goodnaturefarmmn.

This story was originally published in the May 2012 issue of North Shore Highway 61/Northern Wilds. 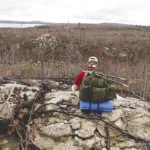 Plot Your Next Adventure: Four Ideas to Start Planning