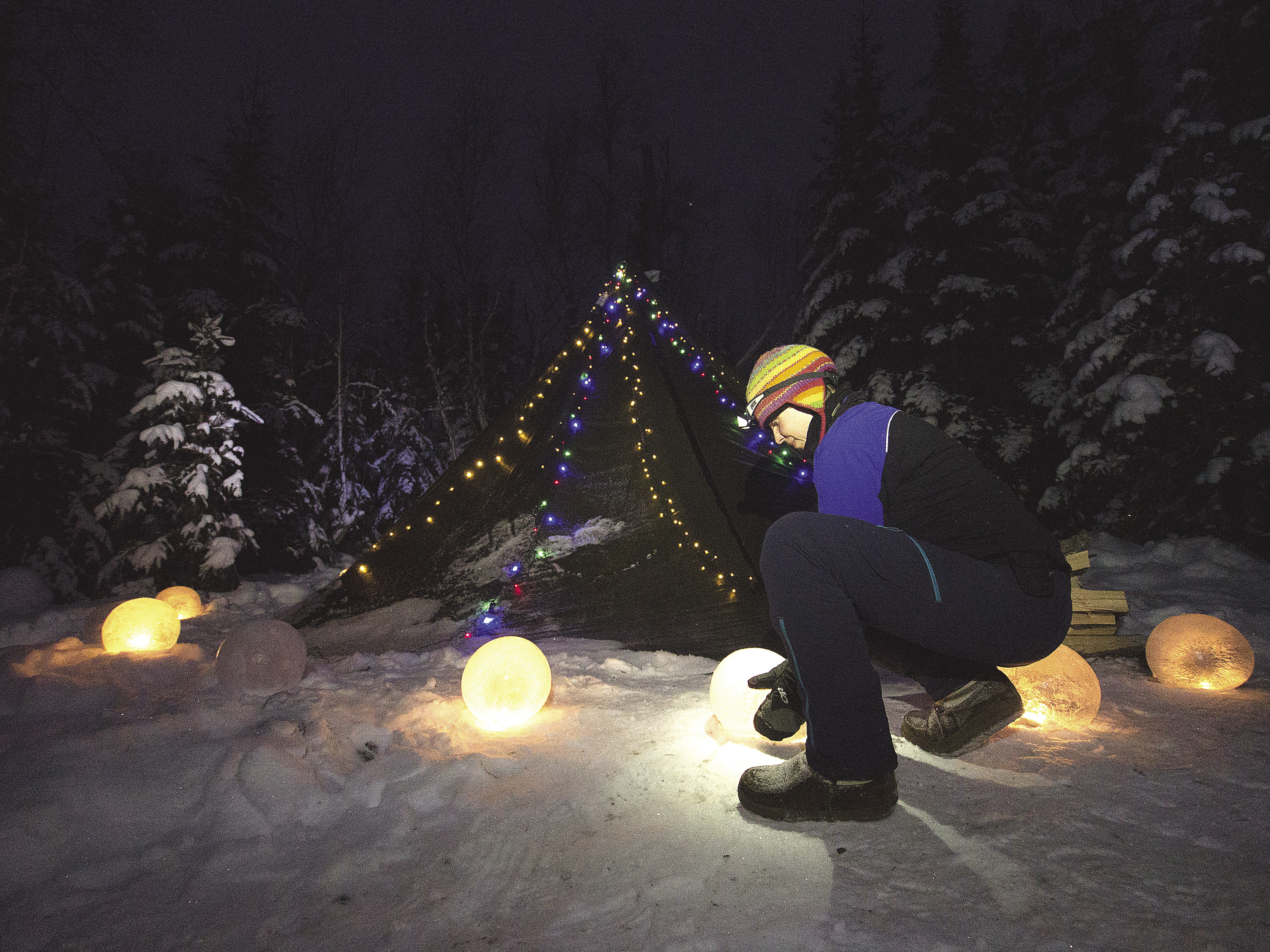 Story and photos by Dave Freeman

As dawn’s first light penetrated the walls of our tent I unzipped my sleeping bag enough to reach out and grab the small slivers of kindling and strips of birch bark I had placed near the wood stove the night before. Half asleep I loaded the wood stove, lit the kindling, and slid back into the familiar warmth of my sleeping bag. It was December 22, 2015 and for the past 90 mornings I had followed the same routine of lighting the woodstove and waiting for the fire to warm our tent. Christmas was just a few days away and the mercury was dropping as winter tightened its grip on the wilderness.

On September 23, 2015, my wife and I had loaded our canoe with food and camping gear and paddled into the Boundary Waters Canoe Area Wilderness (BWCAW) for an entire year. We are concerned that copper mines being proposed just outside the wilderness area could pollute these pristine lakes and rivers so we decided to spend a year in the wilderness to raise awareness about this issue. We wouldn’t turn on a faucet, enter a building, or cross a road for 366 days. We were living out of our tent, exploring more than 500 lakes, rivers, and streams and moving camp about 100 times throughout the year. People often assume that summer’s swarms of mosquitoes, frigid winter nights, or perhaps a year without a shower would be the hardest part of spending a whole year in the BWCAW. In reality, as time passed our bodies hardened and the physical hardships became normal. The hardest part was being isolated from friends and family, which gave the holiday’s special meaning.

As the fire took hold, the stovepipe began to glow red as heat radiated into the tent; our day began in earnest. Sipping coffee, we watched the light increase as the sun climbed higher in the sky. As the weeks and months flowed by our pace had slowed, our senses continued to heighten and we were content to fill our days with the simple tasks of gathering water from an ice hole chopped in the lake, searching for firewood, and a handful of other tasks central to our survival.

After breakfast we pulled on layers of wool and fleece and left the warm oasis of our tent behind. We hoped that the 10-degree F. air chilling our faces had frozen the lake to the south of our campsite on Newfound Lake, but our hearts sank as we trudged out onto ice in front of our camp. A quarter mile to the south by Horseshoe Island the now familiar line of dark, churning water signaled that the southern half of the lake was still open. As we walked back to camp through six inches of powdery snow, we realized we would remain cut off from the outside world until after Christmas; it was just us, alone in the wilderness.

With a large pile of firewood secured and nowhere to go until the south end of the lake froze solid, we set about preparing for Christmas. In the wilderness, holidays and special occasions took on new significance. We found ourselves missing friends and family more as Christmas approached and things like hanging stockings, baking Christmas cookies and other family traditions took on special meaning. Plus, our routine and diet was relatively simple, so what we would prepare for Christmas dinner provided hours of contemplation and debate.

Normally Christmas is a hectic time for us. This year, deep in the wilderness waiting for the lakes to freeze completely, we found ourselves with all the time in the world. To kick off the holiday season we carefully unwound two strings of solar powered lights to decorate our tent. The cold nipped at our fingers as we fumbled to tie the lights to the top of our eight person SeekOutside tipi tent and decorate our “house.”

As we fumbled with twisted, tangled strings of lights, we realized it was the first time we had hung up Christmas lights together. We would celebrate our sixth wedding anniversary in the wilderness a few months later and it seemed ironic that it took a Christmas in the wilderness for us to finally battle with holiday lights for the first time. And although we were attaching the lights to a tent in the Boundary Waters, our process would have looked familiar to many: debate about the design, untangling, struggling, exchanging some terse words—and lights that wouldn’t turn on when plugged into the solar battery. After sunset, we realized that these lights had a sensor and only glowed when it was dark out. In the end, we came to enjoy the lights, which added cheer to the longest nights of the year. In fact, when we moved camp shortly after Christmas, we carefully folded up the tent with the lights still attached so we could keep the lights up for New Year’s Eve.

With the lights strung on the tent, we turned our attention to making luminaries out of ice. Tea candles and a handful of special balloons had been brought in our last resupply before freeze up five weeks earlier and we had been hauling them around ever since. In a house, you would stretch the balloon over a faucet, turn the water on and wait for the balloon to fill with water. After lots of struggling and debate we developed a routine. Walk to the ice hole, fill up all our pots and water bottles, and haul as much water as possible back to the tent. Blow up a balloon and stretch the balloon over a narrow mouth water bottle and pour the contents into the balloon, struggle with increasingly cold fingers to pull the balloon off, refill the water bottle and repeat the process. It took four bottles to fill each balloon and we made six luminaries, so you can extrapolate from there. What would have been done in a few minutes at home ended up taking us a couple of uncomfortable hours, but Amy was determined to encircle the tent in glowing lights and coaxed me to continue. We carefully placed each balloon on the snow and waited for them to freeze overnight. In the morning we broke the balloons and the unfrozen water poured out, leaving a hollow globe of ice. On Christmas Eve we could hardly wait for darkness to fall so we could light our luminaries for the first time.

With the decorations in place we turned our attention to food. Amy’s grandmother used to spend weeks baking traditional Norwegian Christmas cookies. This would be the first Christmas without her—not because we were in the wilderness, but because she had passed away during the summer. Our isolation was taking its toll and melancholy threatened to establish a tone for the day. So we experimented with baking our own Norwegian Christmas cookies, sandbakelse, under the woodstove. We still didn’t have a bridge between us and the outside world, but at least we could keep a few holiday traditions alive. We mixed up the almond-flavored, buttery dough and pressed tablespoons of it into a dozen little tins. Most of the first batch stuck to the metal because the bottoms were undercooked. On the next round we rotated the tins from over and under the stove—and the cookies were no different than if they had been baked in an ordinary oven.

On Christmas morning, the south end of the lake had frozen enough to safely walk on. After breakfast we trekked down the lake following tracks left by wolves along the snow-covered shoreline all the way to Moose Lake. Frozen lakes were the best Christmas gift ever. Soon we would be free to roam them at will. We spent most of the day cooking, eating, reading and sharing stories about family. There were no schedules and in a few days visitors would arrive with several weeks worth of supplies, so we happily stuffed ourselves, content with the knowledge that more food was on its way. The holidays are a time to reflect on what we are thankful for. Snug in our tent, soaking in the radiant heat of our wood stove, we were thankful for the most basic things; food, water, shelter and companionship. We had everything we needed and it was quite simply a holiday we hope to never forget.

To learn more, check out the Freeman’s new book, “A Year in the Wilderness: Bearing Witness in the Boundary Waters.” 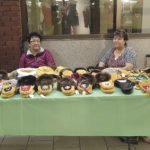 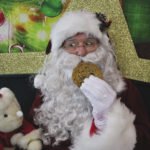 Retiree takes on Santa this season