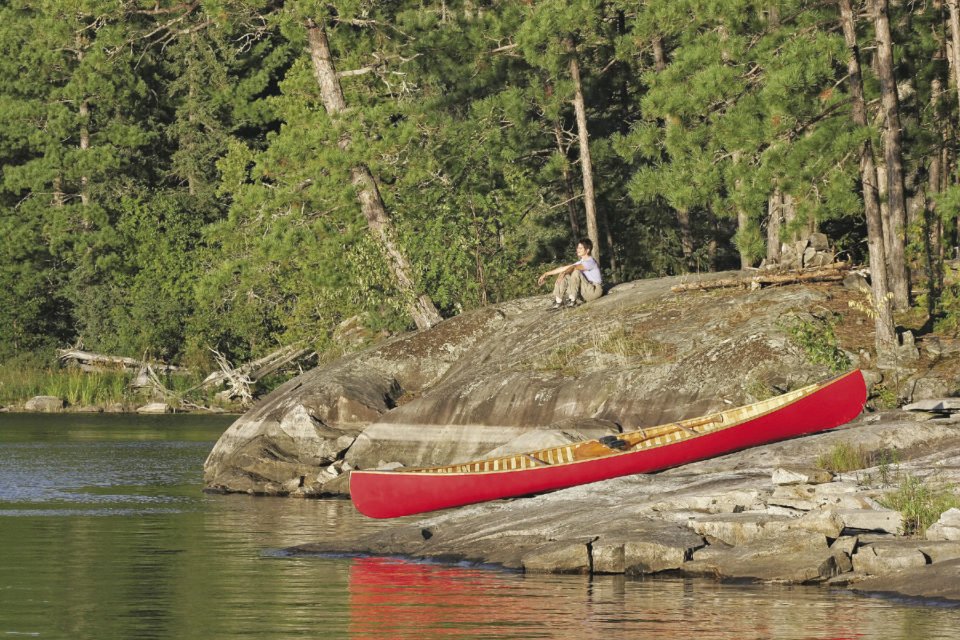 Mostly made of the stuff of the canoe country itself, a wood canvas canoe and tired paddler bask in the evening sun. | MICHAEL FURTMAN

Even on the lee shore where the portage ended, waves slapped steadily against the side of the hull as the loaded canoe floated parallel to shore, waiting for us to climb in. On command, the dog deftly leapt aboard, nails finding purchase on the cedar floor. Steadying the canoe, I nodded to Mary Jo, who climbed in next, shaking water from her feet as she entered. Finally, as she braced the canoe with her paddle, I grabbed the ash gunwales and simultaneously shoved off and hopped in.

We turned the 17-foot wood and canvas canoe toward the seething expanse of the Boundary Water’s Pine Lake, wind whipped and white capped down its entire length. It was going to be quite the ride.

“Are you ready for this?” I called to Mary Jo. She turned, grinned, nodded, and we were off.

There aren’t a lot of canoes I’d be comfortable taking into three-foot seas, but this boat, based on an old Canadian design, was built for just such a challenge. A classic design, it was meant for more than a Sunday afternoon paddle. It was made to get you across just about any lake safely, and with dry gear.

And it did, surfing on big waves for more than a dozen miles with nary a drop shipped.

My first experience on the water was in my dad’s 1946 square stern wood and canvas Old Town, so I’ve long had an affinity for wood canvas canoes. I’ve paddled my fair share of aluminum, plastic, and Kevlar canoes, and all were just fine. But there is something special about paddling the canoe country in a boat made mostly of the materials you see along shore. White cedar for the ribs and planks. Ash for the stems, thwarts, and seats. The birch bark of the Ojibwe was replaced by cotton canvas, and spruce roots replaced by brass tacks and bolts, but still they are very much made of the canoe country. Of course, you really should have good spruce beavertail paddles, too, and we do.

Call me weird, but I also get a sense of satisfaction knowing that if this canoe were to be hauled ashore and abandoned, it would eventually return to the earth from where it came.

Yes, they take a bit more maintenance. Yes, they are heavier. But they are gloriously beautiful, as silent as an otter, and as tough as a moose. Take my word for it.

Of course, not every piece of equipment in that canoe was old fashioned. No sir, I’m not nuts enough to lug a 30-pound canvas tent just to be nostalgic. Twenty-some pounds saved by a modern nylon tent is too significant to ignore, as my back can attest. In fact, most of today’s lightweight camping gear is not just superior to the counterparts of the past, they make it possible for many to venture into the Boundary Waters and Quetico that might not otherwise be able to handle the rigors should they have to live like the Voyageurs or Ojibwe.

Having said that, there are tried and true items that have stood the test of time, and are as good a choice today as any of their modern counterparts.

The classic canvas canoe pack, made by Duluth Pack or Frost River, is still seen as frequently on portages as any nylon counterpart and for good reason. Some time ago, I did a comparison for a magazine where I loaded canvas packs and nylon packs identically, and put them through the same tests—abrasion resistance on canoe country granite, and water resistance both in the rain and in bilge water. The long and the short of it was that the canvas actually withstood abrasion better and were just as waterproof as the coated nylon. Truth is, they all took on water eventually, and so all should be lined with a replaceable plastic liner.

For me, the classic design of the #3 Duluth Pack is the ideal gear pack for the canoe country. Most packs, including all “modern” canoe packs, are box style. The #3 is essentially just an envelope. This has two advantages. First, being tapered toward the bottom, it forces more of the load’s weight to be toward the middle and top of the pack, where it should be for comfortable carry. Square bottomed, box shaped packs, tend to be bottom heavy. That’s why they all require hip belts.

Speaking of which, a “classic” rule is that you should have most if not all of your load ride below the gunwales for safety and stability. That’s another area where the #3 shines. Laid flat, with its top and bottom to the canoe’s sides, it conforms perfectly to the canoe’s curves.

The other tried and true I would not be without is the combination of the old-fashioned trapper’s ash pack basket and a Duluth Pack #2 Cruiser.

Yes, the Cruiser is a box pack, but at only 19 inches tall, rises only about seven inches above the gunwales. The ash pack basket? It’s inside the Cruiser. and this has been our food pack for over 30 years of rigorous canoe trips and would easily last a couple of decades more. The ash basket keeps food from being crushed, and the Cruiser provides protection, shoulder straps, and side pockets for water bottles and the day’s lunch and snacks.

It should go without saying, but I’ll say it anyway—these packs look great in a classic wood canvas canoe. But they also lend class to our Kevlar boat as well.

There are a few other classics that have been, and will always be, along on our canoe trips.

First on the list is a good birch-handled fillet knife in the style of the Finnish “puukko.” There may be other fillet knives that are as good or even better, but sorry, no plastic handles on my fillet knife.

Third, a venerable Swiss Army Knife (one with a small saw blade) is always in my pocket, or on my belt.

Fourth, a simple, accurate Silva compass is also in my pocket. No batteries required.

Fifth, Fisher F series maps. These blue and yellow maps (half of mine are so old, they’re made of that “parchment” material they once used) have, after some dallying on my part with those from other companies, proven to be my favorites.

And finally, I can’t imagine going on a canoe trip without these essential fishing lures: the original balsa Rapala in both the original gold and silver colors; Mepps spinners with squirrel tails; and 1/8 and 1/4 ounce jigs. If you can’t catch walleye, bass, or pike with these, chances are, having every lure in the store wouldn’t have made any difference. They just weren’t biting.

They are choices, though. And pretty darn good ones. 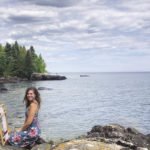