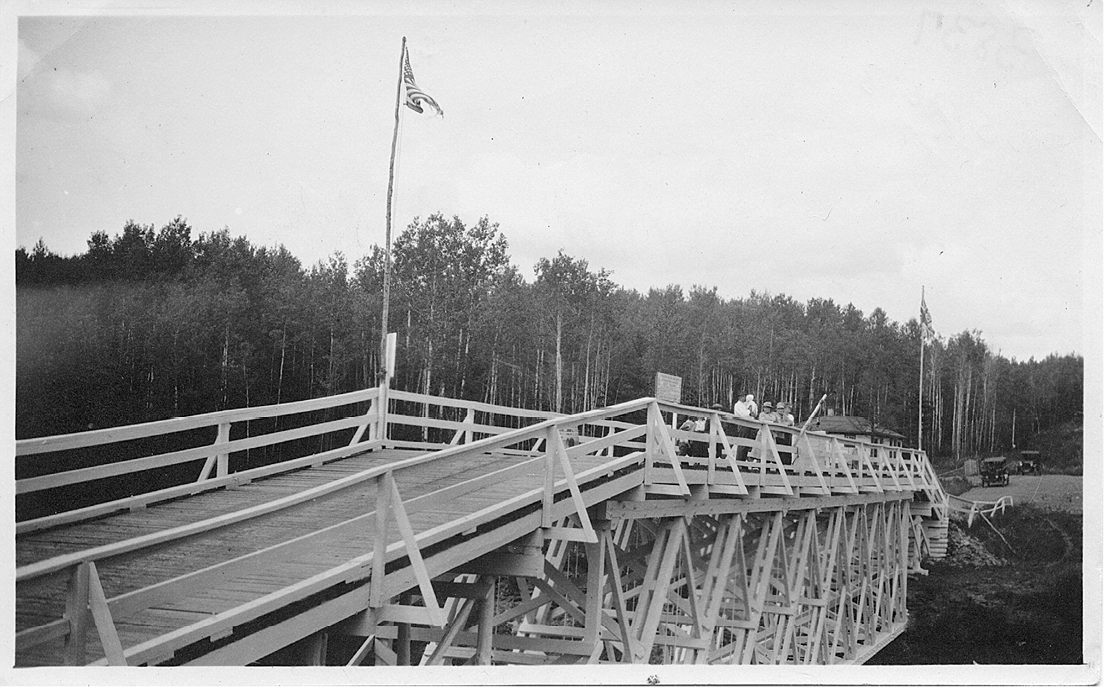 The Outlaw Bridge was built by Minnesota and Canadian citizens, with no help or oversight from their respective federal governments. | Cook County Historical Society

Pigeon River—Folks in the Northern Wilds pride themselves on being independent. That adventurous spirit has a long history and includes many stories of determination. Perhaps none more legendary than the tale of the “Outlaw Bridge,” built in 1917 by average citizens without government oversight or assistance.

There is a record of automobile travel across the border before the bridge was constructed. The Cook County News-Herald reported that W.H. Foot, A.E. Blanchard and Bert Skeel of the Central Garage of Port Arthur made the trip on the nearly finished Duluth to Port Arthur Road in August, 1915. The article states that they made the trip despite “about eight miles of road on the Canadian side that has not been graded, no bridge across the Pigeon River and about two miles on this side has not been cut out.”

However, it was noted the trip was made with “considerable difficulty.” The men made the return trip to Port Arthur by boat. Their trek highlighted the need to bridge the gap between the two countries.

U.S. proponents of the bridge reached out to legislators but were told by Congressman Clarence B. Miller that it would take three years to get federal funding. Their Canadian counterparts heard the same. Knowing that, citizens on both sides of the border took matters into their own hands.

According to local historian Dan Helmerson, credit for the bridge construction goes to the Rotary Clubs of Duluth and Port Arthur and Fort William, along with Canadian lumberman William Scott (owner of the Pigeon River Timber Company) who spearheaded the entire project and donated the timbers used to construct the bridge.

They raised the funds, which included $2,000 from Cook County and $1,500 each from the Canadian and Duluth Rotary Clubs. The group enlisted Fegles Engineering to do the necessary engineering and built the wooden structure. The cost of the bridge? According to the Cook County News-Herald, $4,801.78.

It wasn’t perfect. The Cook County News-Herald reports on an inspection of the bridge by county commissioners, the county auditor, the county surveyor and William Corcoran of the Pigeon River Lumber Company on May 2, 1917. The article declares the group was “highly pleased with the bridge and say it is a good substantial structure, and except for the approaches at both ends, it is fully completed.”

Other reports explain that the builders ran short of materials and the approaches on the 120-foot bridge were too short and steep.

Despite its shortcomings, there was an official dedication of the bridge on Saturday, August 18, 1917. Invitations were sent only to state and provincial authorities. According to the 1971 issue of The Rotarian, no one wanted federal officials to know about the bridge until it was a “fait accompli.”

The hosts expected about 50 people from Duluth for the occasion and fewer from Canada. The popularity of the Outlaw Bridge was greatly underestimated—over 500 people came to celebrate the bridging of the gap between nations.

The Canadian delegation included 25 touring cars, led by two bagpipers. The northern contingent was followed by a “repair car,” carrying tools, spare parts and replacement tools. The first car crossing the bridge from the American side was a Ford, driven by Emil Hall.

The celebration lasted three days and most of the dignitaries gathered at the Cook County courthouse, which was then just six years old.

The wooden bridge itself lasted for 13 years. In 1930, the Outlaw Bridge was replaced by an all-steel bridge—20 feet longer with safer approaches. It was paid for jointly by the U.S. and Canadian governments and was dubbed the International Bridge.

For 33 years, the “new bridge” at the site of the Outlaw Bridge served as the entry into the U.S. from Canada. In 1963, a third bridge was constructed on Highway 61 at the current site of the Grand Portage/Pigeon River port of entry.

But memories of the old bridges live on in Cook County Historical Society archives and in stories handed down for generations about the resolute citizens who decided not to wait for government help, but built their own bridge.

The Cook County Historical Society invites all to join them for “Bridging the Gap: 100th Anniversary of the Outlaw Bridge” on Saturday, July 29 at 11 a.m. at the Johnson Heritage Post in Grand Marais.

At the event, Professor Beverly Soloway from Lakehead University, Thunder Bay, will share the Canadian viewpoint of the Outlaw Bridge.

Dan Helmerson will speak about the Outlaw Bridge from the Cook County resident’s point of view. He has gathered an interesting assortment of information about the bridge and the characters that constructed it. He will also delve into the history of what is now Highway 61.

Helmerson is collecting stories that North Shore residents may have heard from their parents or grandparents about the Outlaw Bridge. If you have a tale to tell, contact him at (941) 202-8880 or email danhelmerson@gmail.com.

The presentation will be followed by a luncheon/barbecue, provided by the Cook County Historical Society. Admission is free and all are welcome. 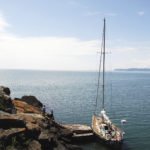 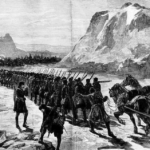 Northwest Resistance of 1885: When soldiers marched to Nipigon, Ontario