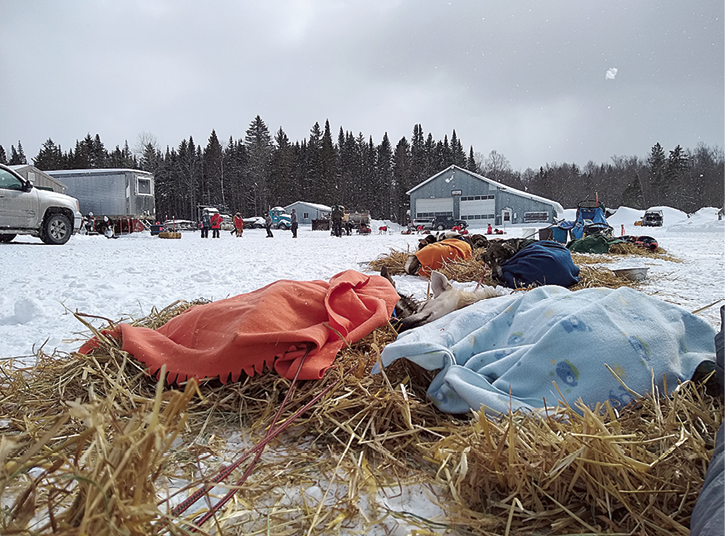 The team will rest on average four hours at each checkpoint, on straw with blankets. | ERIN ALTEMUS

As I write this, the big race is three weeks away. The team has trained 1,100+ miles to date. I’ve spent almost every free day off from work running dogs since September. This will be our sixth Beargrease Marathon. I am competitive at my core and I am making a plan.

What will be our race strategy? How do other mushers run the race? How should spectators interpret the race as it unfolds?

The race this year runs from Duluth to Grand Portage in seven legs, varying from 30 to 60 miles in length. There are six checkpoints. Between these six rest stops, the team must use 24 hours of required rest. At two of these checkpoints, Sawbill and Mineral Center, the team must rest a minimum of four hours. The other rest can be split up however the musher desires, more rest at some stops and less at others. How to divide up the rest is a big part of the strategy.

For a number of years, a musher had never won the Beargrease who hadn’t rested at the first checkpoint. The first two legs of the race are 38 and 35 miles. A combined distance of 73 miles is certainly a doable distance for a dog team to cover, but mushers generally find that resting the team early can prove advantageous later. So, you will see most teams resting one to four hours at Two Harbors. Incidentally, Ryan Anderson did win the Beargrease in 2017 after blowing through the first checkpoint. He was training his team for the Iditarod that year, so they were plenty used to running long legs. In past years, I have rested two hours at the first checkpoint. This year I plan to take more rest early on. The idea is that early rest may pay dividends later.

As a spectator watching the trackers, you must account for how much rest each team has taken to really understand the musher’s current position in the race. Just because a musher is leading the race on the tracker, does not mean they are currently winning. The musher may have taken less rest at the first couple of checkpoints, so they are ahead on the race course, but they will be required to use their full rest, so unless they are actually running the fastest speeds on the course, they might, in theory, be further behind in the standings. It isn’t until teams leave Mineral Center, the last checkpoint, that the order of mushers on the tracker is the true order of standings. By this time, all rest has been accounted for. It happens frequently that the media will tout a musher as being in the lead of the Beargrease, when in actuality they are not, due to the rest factor.

A key part of running a long-distance race is to control the team’s speed, especially early on in the race. A marathon runner cannot go into a marathon at a full sprint or she will exhaust herself early. A dog team must also not start out at a sprint or they will run out of steam. But do the dogs know this? Of course not. If I let my team run without controlling their speed, we’d be toast by Finland. So, I use a drag mat on the sled to slow the team down. Generally, I want to average 10 mph throughout the race. The team is often so pumped in the beginning that unless I have two feet on the drag mat for the first two legs of the race (which you remember from above is over 70 miles), they will fly down the trail. I try to keep them under 11 mph for these legs. A musher told me once that using the drag mat is kind of like a Prius. The break actually charges up the battery. By braking, I am charging up my team’s battery…so later in the race we can hopefully maintain our speed. You will sometimes see mushers head out quite fast in the first leg or two. Then you watch. Can their team maintain that speed or do they fade towards the end?

In 2009, Jason Barron won the Beargrease by giving one dog, his main leader Clumber, a ride in the sled for the first half of the race. When he put Clumber up in lead, fresh at Trail Center, Clumber was able to drive the team to the finish for a victory. In 2019, I tried this strategy, albeit for slightly different reasons. Our main leader Beezus had an early training injury. He recovered in time for the Beargrease that year, but he had much fewer training miles than the rest of the team. I carried him in the sled for two legs before it became clear I needed his leadership, so into lead he went. While we didn’t win the race that year, I was able to run Beezus, which to me was a victory. Without him, we likely wouldn’t have finished.

To have the sought-after “magic carpet ride,” a team must have clean runs. This means, you can’t stop because the leaders you chose are not doing the job and you spend time switching leaders. You can’t have an injured dog that you have to carry in the sled. You can’t have dogs stopping to poop every mile because you overfed them at the last checkpoint (a common mistake of mine). You can’t take any wrong turns or have an equipment malfunction. You must take care of yourself so you aren’t making poor decisions or suffering from frostbite or dehydration. The team that has the magic carpet ride this year will make the fewest mistakes, have the most consistent speed, and drive their dogs to the edge of their ability but not beyond. A little luck helps too.

Ten of the 20 marathon mushers this year are women. Over half the field are rookies, with a couple more who have attempted but not finished the marathon. There are two former champs running and several more marathon veterans with their eyes on the prize. I am counting down the days, planning my own strategy and praying for snow. It’s go time. 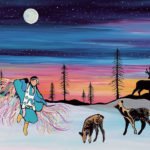 Niimi with Waawaashkeshi (She Dances with Deer) 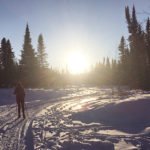