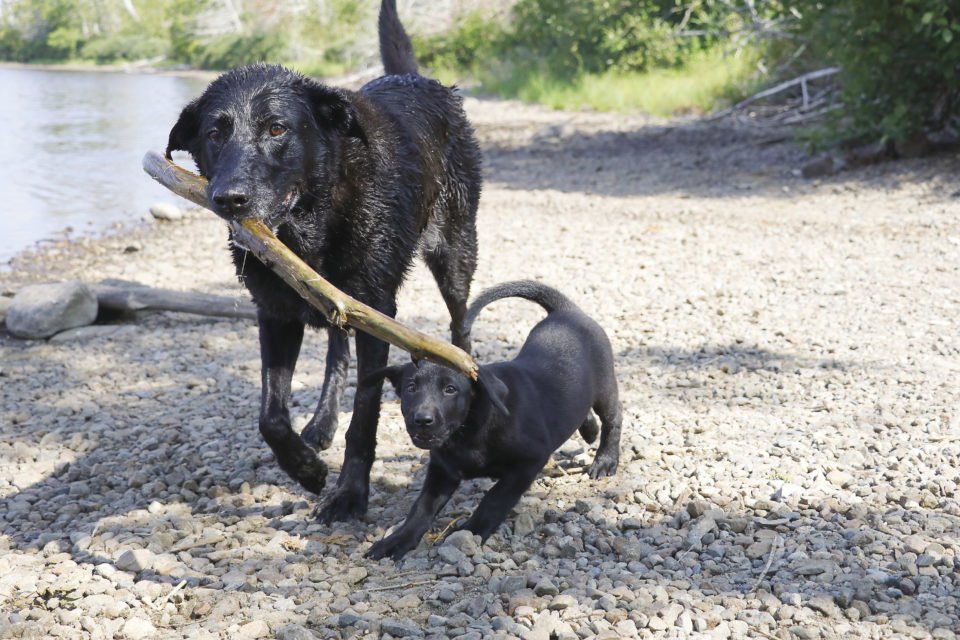 Young dogs can learn a lot from adult dogs. Habits (good or bad) that the old dog has will be adopted by the puppy, as will skills. | MICHAEL FURTMAN

Bringing a puppy into the home of an older dog

Bella was not the least bit amused.

At first quite happy to again see her breeders, Al and Margo Penke of Ely’s Boundary Waters Labradors, her mood changed as I fussed over a black puppy. The seven-week-old pup I’d come to pick up, and whose name became Scout, squirmed in my arms, trying to give Bella’s face a sniff. The 11-year-old turned away. I had to practically put Bella in a head lock to get her to pose with me and the puppy for a photo.

And when I made a nest of blankets on the front passenger seat where Scout would ride, and set her in it, Bella gave me a look of disdain.

“You’re not really bringing that thing home with us, are you?” her amber eyes asked.

The Usurped and the Usurper

I’d gone through this before. While my dogs are also my pets, they are working hunting dogs as well. As one approaches the age where she can no longer perform afield, I bring on a pup.

Bringing a puppy into another dog’s home requires patience on behalf of the older dog and yourself. Introduce them in a controlled fashion. Rarely will an older dog harm a puppy (they are, after all, instinctively pack animals), but it’s still best to be careful during the first introduction, and over the next few days. And don’t over-react if the adult dog establishes a pecking order with a little snarling. I did.

Bella had sought a quiet corner, when Scout started pestering her. Out of my sight, I heard the snarl, and Scout’s frightened yiping. Although I should have known that gentle Bella would never harm the pup, Scout raced around crying like she’d been attacked by wolves. Instead of examining her first to see if indeed she had been nipped (she hadn’t been, based on later examination), I jumped to conclusions and punished Bella. From that time on, Bella would not establish dominance, even though she should have. In other words, it is OK for your older dog to “show its teeth” to the young one when it gets too annoying. It’s no different than you telling the puppy to stop some bad behavior.

How will your older dog react other than this pecking order thing? It may show food dominance—feed them apart so that there are no altercations. It may also sulk. Yes, dogs sulk. The older dog feels its place has been usurped, and may retreat for a week, sleeping in quiet corners of the house, often in places it formerly ignored. That’s OK. It will get over it.

Puppies have an enormous amount of energy and they usually don’t have a throttle. They tend to be either going “wide open” or sound asleep. When Scout was little, she’d get what we’d call the “zoomies.” After waking up from a nap, she’d grab one of her toys and race around like a lunatic. It was both humorous and a bit worrisome, because at times she’d bump into things. We quickly “puppy-proofed” the house so that breakable or spillable items were out of harm’s way. One way to reduce the zoomies is to give your pup plenty of outdoor exercise. It doesn’t take much of a walk to wear out a seven to 12-week-old pup. A tired pup is a good pup.

Puppies will get into trouble—but only if you let them. I strongly recommend a crate in the room in which you spend the most time, and when you can’t keep an eye on the pup, you must crate it. Left unwatched, you’ll end up with chewed shoes and soiled carpets. The crate is never used as punishment, though. It’s pup’s new safe space where it will sleep at night and “time out” during the day. Some owners will sleep in the same room as the pup for the first week or two. I’d limit that to the first night or two, if at all. And if the puppy yowls and fusses in its crate, you need to harden your heart, and let it do so, as long as you’re certain—because you took the pup outside to do its jobs before crating—that it doesn’t need a potty break. Giving in just teaches the pup that fussing gets rewarded.

Speaking of potty breaks—always take the puppy outside immediately after it wakes up, after rigorous play, and after it eats or drinks. Your carpets will be glad you did.

A Time for Each

Bella has been my constant companion for over a decade. I knew she felt left out, so I made sure that I spent time alone with her each day. Sometimes it was just a matter of putting Scout in her crate for awhile while Bella and I sat together. When I ran errands or went photographing, I took her along, all by herself. Scout remained at home in her crate or the outdoor kennel.

I also reaffirmed to her that she came first. When the three of us go outside, Bella always gets to go out the door first. When we get into a vehicle, Bella always goes first and picks where she wants to sit. Bella’s food dish still gets placed on the floor before Scout’s, and when treats are handed out, Bella gets hers first. And if Scout tries to worm her way between Bella and me while I’m giving the old girl attention, she is pushed to the side to await her turn. Bella is my queen. Scout is a lady in waiting. Her time will come.

A pup’s time alone with you is equally important. During those times, you’re building rapport, the pup is learning who’s boss, and you begin basic training on sit, stay and come. It’s also important to introduce them to other people, dogs and situations. You want a well-adjusted puppy.

This “enrichment” is very important. I would take Scout out into the woods and let her explore everything. We went at her pace, and she was off leash but pulling a “check” chord. When still tiny, it was 30 feet of parachute chord; later and larger, the same length of rope. A check chord is a great aid in reeling in a wayward pup, allows them much more freedom than a leash, and just snakes along behind them through brush.

I took Scout to a little creek where she learned about water and walking on boulders. Sometimes we’d explore fields with tall grass over which she couldn’t see. All of this was done in order to build her confidence. And of course, it wore her out! These short forays also made her comfortable riding in a crate in the vehicle—she quickly learned that getting in meant going someplace exciting.

A Time For Both

Eventually, these forays were joined by Bella. It was immediately clear that Scout wanted to do everything that Bella did. In her eyes, Bella was amazing. And she is.

Young dogs learn a great deal from adult dogs. Habits (good or bad) that the old dog has will be adopted by the puppy, as will skills. When hunting together the first fall, Scout really had no clue why we were out there, or what we were looking for. But she followed Bella, and when the old girl got excited over a scent, Scout learned what to search for. When Bella quartered, Scout quartered. Over the course of just three outings, Scout’s mimicking Bella proved a great advantage. Even if your dogs aren’t hunting dogs, surely your older dog has skills that need to be passed on, like riding in a canoe, or going for a run with you. Let the old dog teach the pup. It’ll shorten the lessons!

Each time I’ve overlapped old and young dogs, I’ve felt pangs of guilt, as if I was betraying the old friend. You probably will too. But believe me, it will all work out. The youngster learns a great deal from the elder, and the old dog often regains a bit of spring in its step.

Sometimes, when Scout sees Bella after being apart for a few hours, she races to the old girl and kisses her graying face repeatedly. And Bella, though she would never willingly admit to it, enjoys being worshiped. After all, she’s had me worshiping her for years! 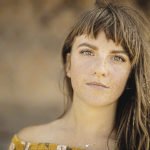 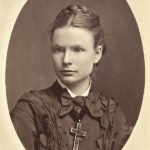