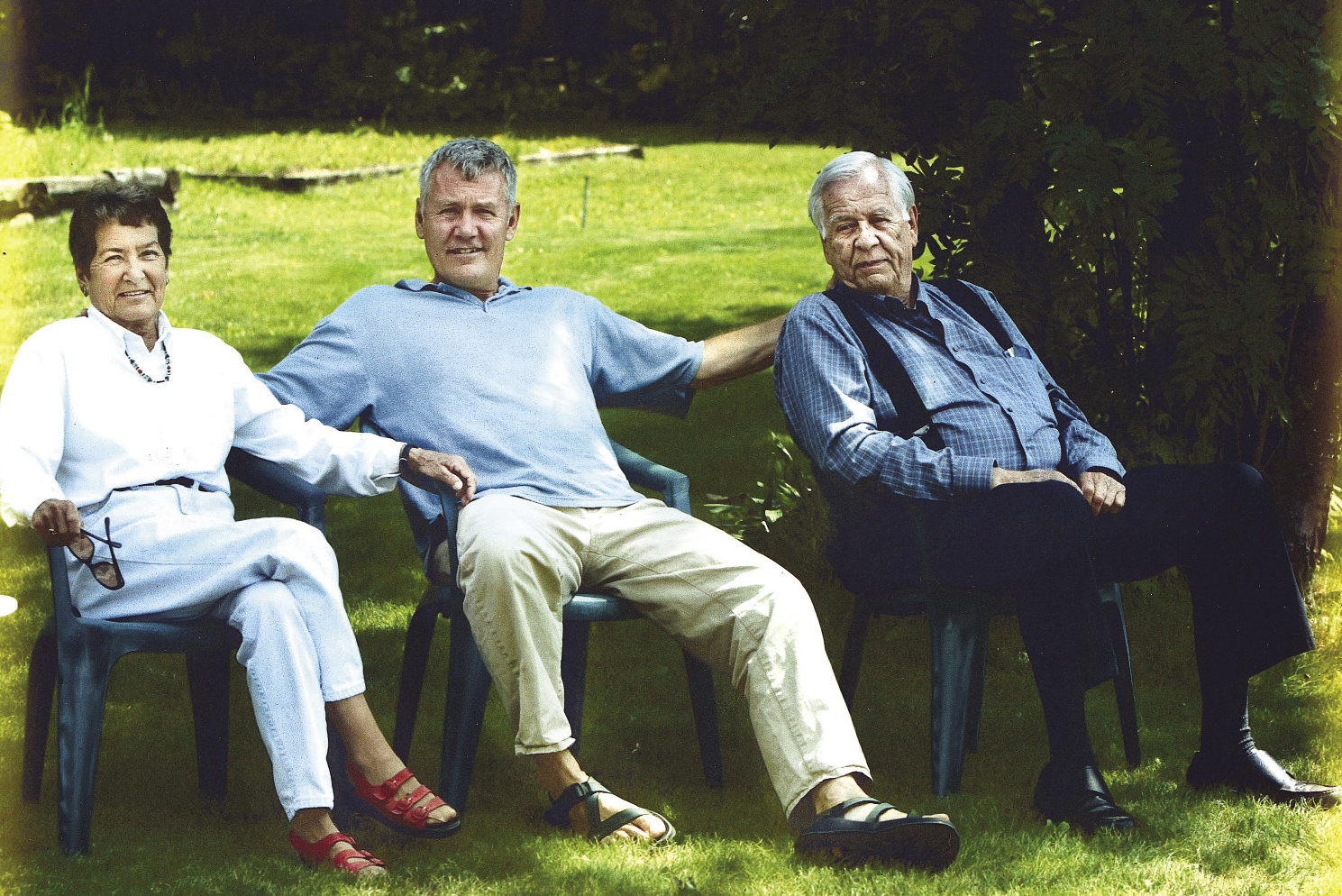 Rick Anderson is seated between his late mother and father, Lou and Dick Anderson. He and his mother searched for artifacts near the family’s lake cabin in Cook County. | RICK ANDERSON

In a climate-controlled basement vault beneath the Grand Portage National Monument visitor center lies 10,000 years of human history. Cataloged and filed in sterile metal drawers is an amazing collection of artifacts, beginning with the first humans to explore the area after the glaciers receded and continuing forward through the fur trade era.

There are stone points and scrapers, exquisite copper implements, stone tools, trade beads, silver jewelry, wrought iron muskrat spears and broken pipe stems; over 2,000 items in all. They were picked along the shores of a lake on the eastern edge of the Boundary Waters by a boy, later a man, and his mother, over a span of 50 years.

“We had these stored in coffee cans and picnic baskets,” said Rick Anderson, 66, of Grand Portage, who donated his and his late mother Lou’s artifact collection to the Grand Portage National Monument.

As a boy, Anderson’s family spent every weekend at their lake cabin near the Canadian border, which was located along the watershed of the famous fur trade era Voyageur’s Highway, a water route that allowed travel by canoe from the Great Lakes to the Great Plains. The French voyageurs merely followed paddling pathway that was used by Indigenous people for thousands of years. Items lost or discarded by untold generations of ancient travelers become today’s archaeological artifacts.

Anderson and his mother spent hours slowly walking along the beaches and shorelines, eyes to the ground. The lake level fluctuated as much as three feet between spring and fall, resulting in erosion that would reveal new relics from the past. Finding them wasn’t easy. Anderson said his father and sisters never developed the “eye” to spot a worked stone among the shoreline rocks. For him, doing so came naturally and improved with hours and years of practice.

“I found my first point when I was seven years old,” he said.

His mother, who grew up at Federal Dam on Leech Lake, another artifact-rich area, had also learned to identify artifacts at an early age. An enrollee of the White Earth Ojibwe Band, she also learned to discern how her ancient finds may have been used as tools, adding context to her collection.

“Mom’s ability was to be able to speculate on the utility of these things,” said Anderson. “My ability is that I can spot this stuff from 20 feet away.”

The collection is a significant contribution to the archaeology of the region.

“The Copper Age in the Lake Superior Basin is really old,” said Bill Clayton, the monument’s archaeologist. “The collection contains some of the oldest identified copper artifacts.”

A copper point that still had remnants of a wooden shaft, which can be carbon-dated, was found to be 7,000 years old, which predates most copper use all over the world. The copper originated on Isle Royale, where the metal is readily available in a pure form called float copper. Ancient peoples didn’t have the capability to process copper ore. Instead, they hammered and rolled the float copper into usable forms, such as a remarkably modern-appearing knife in the collection. Extending from the back of the blade is a narrow tang that likely supported an antler, bone or wooden handle.

Isle Royale copper, a valuable ancient commodity, was traded far and wide across North America. Much of the trade copper discovered by archaeologists are ornamental items, such as beads or hair rings. In contrast, the Anderson collection contains utilitarian items, including copper snow goggles.

The copper artifacts and more exquisitely worked stone blades date to Paleoindians, the earliest known people on the North American continent. They made their way across the Bering Ice Bridge from Siberia as the glaciers were receding about 8,000 to 9,000 years ago. In what has become the Lake Superior Basin, they found an abundance of fish and game, as well as valuable raw materials such as copper and hard stones for making tools, which allowed them to flourish.

“This area would have been like an ancient Silicon Valley and a center for trade,” Anderson said. “The people had technology as well as waterways that provided a transportation network.”

The use of copper expanded the assortment of tools available to the Paleoindians. Included in the collection are fine instruments such as copper needles and fish hooks. But the quality of the stone tools is exceptional as well. Anderson said stone chips created in the process of shaping larger tools were often sharp enough to be used for cutting and scraping. Some of the stone workmanship is extraordinary.

“We used to say the guy who made this point was just showing off,” said Anderson of one large point.

The point was formed with a technique Clayton said is called overshot flaking. The flakes were knapped horizontally across the face of the point, creating two opposing sharp edges and an attractive, rib-like pattern.

Most of the stones in the collection originate from three regional sources. One is a dark, hard stone called jasper taconite, which was quarried from outcroppings around Thunder Bay. A light-colored rock known as Knife Lake gray siltstone was quarried beside a lake of that name in the Boundary Waters. And another light-colored stone, Lake of the Woods rhyolite, came from the north end of that mighty water body. But early tool-makers used any hard stone that was available, including Lake Superior agate.

Anderson said the earlier stone tools display a higher level of workmanship than those from the later, Woodland Period. Stone points from the Woodland Culture are more roughly formed. In addition to Woodland tools, the collection also contains some pottery shards from that era.

The Woodland people may have gathered annually at specific locations for social times and ceremonies or to harvest food from massive fish spawning runs. Mostly they lived in nomadic, small family groups that moved across the landscape based upon available food and the seasons. Indigenous people were still living this lifestyle when European explorers arrived in the region about 400 years ago.

“The North Shore Ojibwe remained nomadic until three generations ago,” Anderson said. My great-great-grandparents would move between Madeline Island and Beaver Bay.”

Because the European traders and trappers used the same water routes as the Indigenous people, they’ve left behind artifacts as well. The collection has the broken pieces of clay pipes carried by the voyageurs, trade beads, a small silver heart and foot-long rusted rods used to make muskrat and beaver spears.

The trove of artifacts remains fascinating to Anderson, who remembers when and where most of them were found. And they are clearly a link to his mother, who died in 2008, and the many hours the duo spent looking for them.

“Mom wore nylons to ward off the bloodsuckers,” he says of the times they spent wading in the lake’s shoreline shallows. “When I’d come out, my legs would be covered with bloodsuckers.”

For many folks, just the thought of bloodsuckers would be enough to keep them on dry land. For the Andersons, it was a small price to pay for the recovery of 9,000 years of history.

“Every one of these items is like a little gift,” said Anderson. “Our family wanted to pass this gift along.”

Clayton said that today, collecting artifacts is discouraged and on some public lands, unlawful. But he is grateful the Andersons took their hobby so seriously and are willing to share their collection with others.

“It’s a gift to archaeology,” he said. “If people hadn’t picked this stuff up, we wouldn’t have it today.” 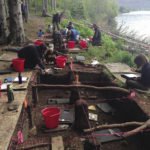 Following the Voyageurs through the Fur Trade 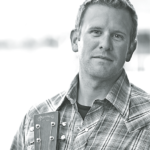 Acoustic Notes from around the Campfire