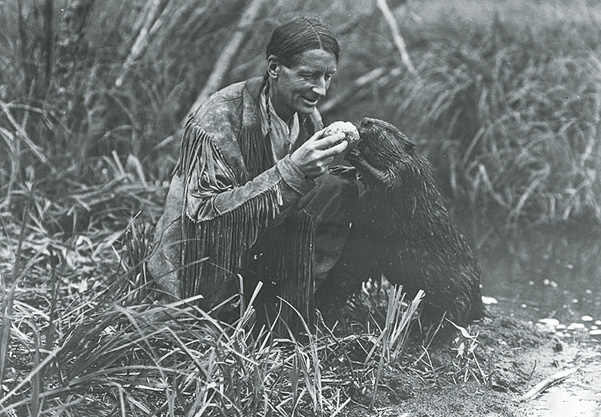 Have you heard about the pet moose that leisurely meandered with its owner in Grand Marais?

Apparently in the 1900s, pioneer Anna Charlotte Johnson (1881-1944) and her pet moose could be seen walking in downtown Grand Marais. Born in Arvika, Värmland, Sweden, Anna immigrated at age 10 to the U.S. with parents Karl and Kajsa Jonaeus, and in 1907 married Grand Marais fur-trader and trading post owner Charles J. Johnson. An accomplished artist and leader in the art community, she also ran the trading post gift store (current site of the Johnson Heritage Post Art Gallery). Today, the west wing of the Art Gallery is dedicated to her original artwork.

In Hovland, there was another pet moose, this one with pioneer settler and early homesteader Laura Alice Hogeboom Harriman (1881-1957). According to an interview with her daughter on WTIP North Shore Community Radio historical series “History Speaks,” Laura and her brother heard a noise in the forest and found a baby moose with its foot lodged between two logs. After they freed the leg, the moose not only followed Laura home, but followed her around everywhere, as if Laura was her mom.

According to historians, having a pet moose was not uncommon years ago. In Canada, there’s the story of John Connell of New Brunswick (“Moose Man of Miramichi”) and his pet moose Tommy. In the early 1900s, he saved the young moose from freezing, domesticated it, trained it like a horse, and rode Tommy by saddle. In the 1920s, Biddy was the pet moose of Dr. Wallen in Thessalon, Ontario; not surprisingly, the town today is the only place in Canada with a bylaw stating “moose are not allowed to roam streets freely.” And in the 1940s, Albert Vailloncourt of Sudbury, Ontario, had two pet moose named Moose and Silver that appeared at events in Ontario and the U.S.

Over in Europe, the famed musical composer Wolfgang Amadeus Mozart (1756-1791) kept a starling as a pet for three years. And the famous Spanish surrealist artist Salvador Dali (1904-1989) had a pet ocelot that accompanied him to places like restaurants and galleries, with Dali sometimes telling people it was a painted cat.

Beavers as pets? In the late 18th century, the fur-trader and explorer Samuel Hearne (1745-1792) while working for Hudson’s Bay Company and living in northern Canada, kept several pet beavers in his sitting room, writing in a letter, “they become so domesticated as to answer to their name.” Likewise, the prolific Canadian author and conservationist Grey Owl/Archibald Belaney (1888-1938) had two pet beavers, Jelly Roll and Rawhide, about which he wrote four books.

U.S. presidents while living at the White House have had some unusual pets. Benjamin Harrison (23rd U.S. president) and his family had two pet opossums from Maryland—Mr. Protection and Mr. Reciprocity—that could be seen running around the White House. Theodore Roosevelt (26th U.S. president) brought an assortment of pets to the White House, including lizards; chickens; a one-legged rooster; guinea pigs; parrots; a pony; a pig; several dogs; a barn owl; a badger the children named Josiah; and, later a hyena.

Grace Coolidge, wife of Calvin Coolidge (30th U.S. president), had a menagerie of pets including a raccoon she rescued, named Rebecca, and built a tree-house for, protected by a chicken wire fence. According to reports, she was brought on family vacations. The next president after Coolidge was Herbert Hoover and he adopted a wild opossum that had wandered onto the White House grounds; Hoover named him Billy Possum.

Back to pet raccoons, a famous Canadian one was a family member for a time with award-winning wildlife author Lyn Hancock, a Canadian-Australian now living on Vancouver Island. In the 1970s, the raccoon was an orphan just weeks old when the Vancouver Zoo—knowing Lyn’s reputation raising orphaned animals—gave her the young raccoon to care for. After Lyn wrote a best-seller book There’s a Raccoon in my Parka, Tabasco became a Canadian media favourite, travelling everywhere with Lyn—from camping in Okanagon to cross-country trips, press interviews, schools and libraries. Years later in 2006, Lyn wrote a heart-warming best-seller sequel Tabasco the Saucy Raccoon.

The world’s largest pet? Well, that could be Bailey Jr., the 1,900-pound pet buffalo of Jim and Linda Saunter in Spruce Grove, Alberta. Publications from around the world and TV’s Animal Planet have told the story of Bailey, with mentions of his car rides in a specially-converted reinforced vehicle driving around with Jim. In an article in the UK Daily Mail newspaper (Nov. 9, 2011), Linda said, “He has a bond with Jim which is just incredible…They have shared the bond since Bailey Jr. was only a few weeks old when we adopted him after a tragic death [2008] of the first buffalo that Jim and I had raised.” She adds that Jim had wanted to become a buffalo whisperer to show people “that this level of communication between man and bison is possible.”

It’s important to note that federally and provincially, it is illegal in Canada to hold ‘wildlife’ in captivity as pets, while in the U.S. each individual state decides which pets are banned. 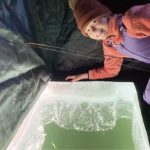 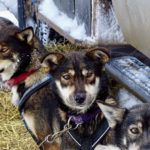