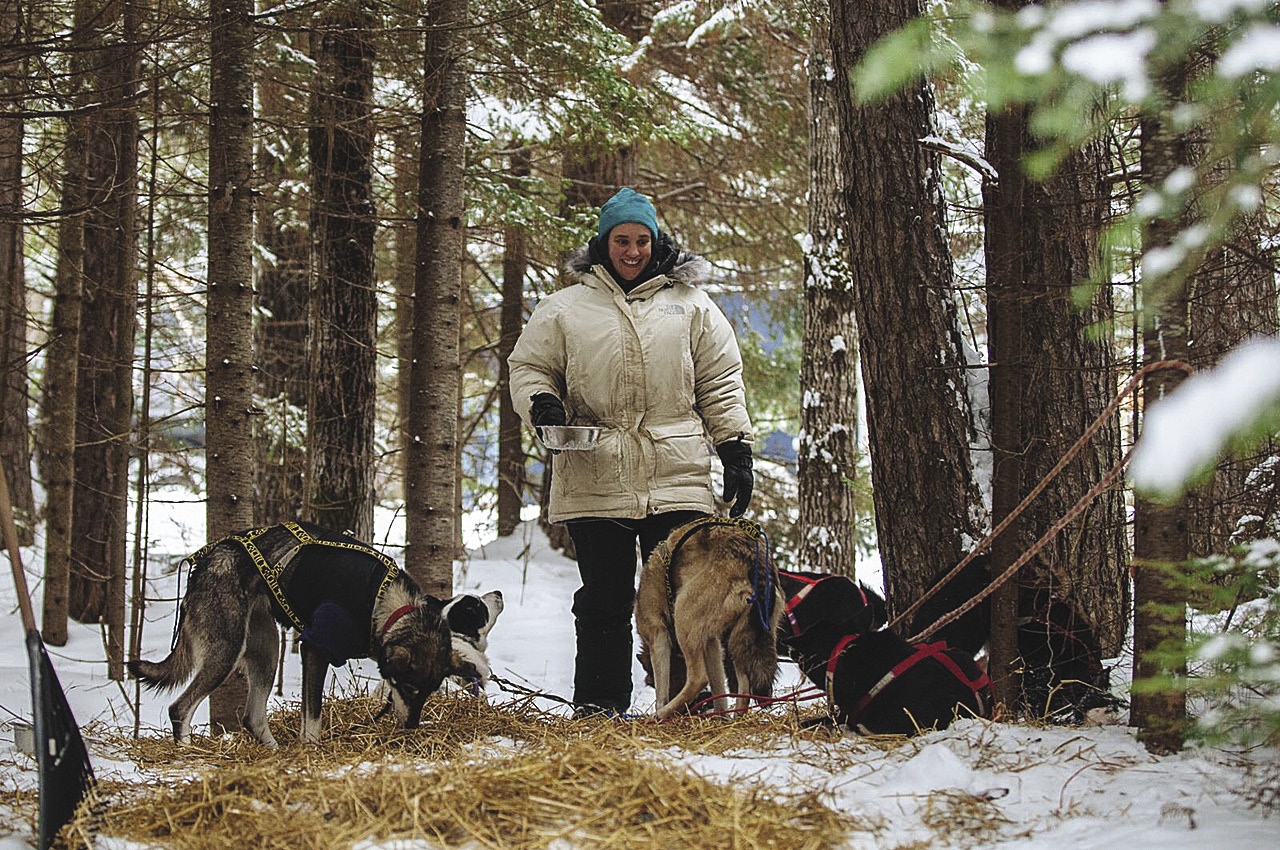 Handling duties involve feeding the dogs, bedding them on straw, and giving them lots of love. | VICKI SCHMIDT

I’ve heard that the handlers sleep less than the mushers during the Beargrease. During the race, which started on a Sunday morning and ended 72 hours later, I slept eight hours, broken into two-hour increments. I didn’t do an exact tally, but I believe Matt slept about 15 hours.

I am not saying that handling is more difficult than standing on the runners for three days. But sleep deprivation has its challenges.

Stepping back, the race started on a chilly Sunday morning in a large gravel pit outside of Two Harbors. The handling crew consisted of Andrew, our full time handler for the winter; Annie and Dan who handled at the Beargrease last year; and my mother-in-law. Amidst a few thousand spectators, we maneuvered dogs to the gangline, only to be told there would be a delay to the start. Matt would be the second musher out of the chute, which meant there wasn’t going to be a lot of warning about when to go, so we ended up with the dogs on the gangline far too early. They screamed and hollered for a full 10 minutes before we finally got the team to the chute and down the trail—a relief for musher, dogs and handlers to finally see them on their way.

Most of the teams, Matt’s included, kept a fast steady pace to the Finland checkpoint. At Finland, the parking lot was a sheet of ice.

When Matt’s team arrived, we quickly stripped all the dog booties so the dogs’ feet would slip less on the ice and maneuvered them down the ice sheet to our truck where the dogs ate, drank and took a short nap before heading out on the trail again. Interestingly, several teams blew through the Finland checkpoint and kept going to Sawbill. There are two mandatory checkpoints later in the race, the others are optional. But a team has to accumulate a minimum of 30 hours rest during the course of the race. Former champions Ryan Anderson and Nathan Schroeder both went through Finland. Our mushing friend and statistician had told us that no one has ever won the Beargrease without resting in Finland on the first day. Would that soon change?

Matt left two hours later for Sawbill, an unassisted checkpoint, so the handling crew drove straight up to Trail Center, parked the dog truck and went to eat and rest at our home nearby. I slept for two hours but then awoke to check the GPS trackers. Matt was back on the trail headed toward Trail Center after a 4.5 hour rest at Sawbill. He looked to be moving at a steady pace. By then I had too many nerves to sleep any longer. We left for Trail Center in the wee hours of the morning to await the team.

They came smoking into the checkpoint, having passed several teams on the way in. I was worried that Matt was moving too fast early on in the race, but I kept most of these thoughts to myself—Matt knows what he is doing. The handlers did the usual routine—strip booties, feed dogs, lay down straw, cover the dogs with blankets and relax for two hours, then feed them again. Keep track of time, wake up the musher, bootie the dogs, point the sled in the right direction and fill it with more dog snacks and human snacks, put the dogs back on the line and send them on their way.

By this point, a pattern emerged. Ryan Redington, another rookie in the race, but experienced musher who had recently beat Matt in the Gunflint Mail Run by a few minutes, had lept ahead of the rest of the mushers, and he did this by cutting rest early in the race and going fast. Redington left Trail Center a couple hours earlier and Matt was next. Within minutes however, Matt was trailed by Colleen Wallin, Denis Tremblay, Anderson and Schroeder, all serious contenders for the win. I thought one of these competent folks would pass Matt on the way to Grand Portage, but Matt got there first, achieving the fastest run time on the longest leg of the race.

However, Matt didn’t feel good about the run. It seemed several dogs were sick, and running in the heat of the day never makes a musher feel good about his run. When we first arrived at Grand Portage, half of the team didn’t want to eat. Several hours later however, they started eating and drinking again. By the time the eight-hour mandatory rest was over, the team looked refreshed. One dog, Melverne, would stay behind with a sore wrist.

At this point, I noticed another pattern. Redington had left two hours before Matt again, but Anderson, was leaving 10 minutes behind Matt from every checkpoint. Redington was down to a smaller team of dogs by then and we knew he had to catch up on mandatory rest, so even though he was ahead in physical miles, I knew that Matt might actually be ahead of him once the rest was equalized. Anderson however, had 13 dogs like Matt, and put himself in a great position, running just behind him and keeping the competition within sight.

On that leg, the teams ran past the half-way point and were on their way back down the shore toward Duluth. My handling crewmates were getting excited about how well Matt was doing. At one point, my mother-in-law with hopeful eyes and a rush of excitement exclaimed, “You mean, he might actually win?” to which I harshly responded that we simply weren’t going to talk about it anymore. If my two times running the marathon taught me nothing else, it’s that you can be having a great run and it can all fall apart in seconds. There were still 150 miles to go and that’s a lot of race. I knew how hard the last two legs could be and I just simply didn’t want to jinx anything by getting too excited or confident about Matt’s position and odds.

Matt had strong runs into Devil Track and then Sawbill—though he had to carry a dog in the bag going into Sawbill, which slowed the team down in some really tough hills. The real test was about to come in Finland, the “turn and burn.”

Redington’s team came in first, now only leading the pack by just over an hour. He bedded his dogs down on straw for a rest.

Anderson had stealthily followed Matt out of Sawbill, again, 10 minutes behind and had maybe gained several minutes, so we knew these guys would be seeing each other soon. Matt came into the Finland checkpoint. We swung the team around and sent him back on the trail. He did a head-on pass with Anderson, who also came in, turned his team around and headed back out just behind Matt. Then, much to my surprise, Redington lept up, hooked up his team and took the chase.

From then on, I could hardly watch the trackers. Anderson eventually passed Matt, but Redington did not, so they came into Two Harbors in that order. Once the rest had been calculated however, Matt would actually have to leave a few minutes behind Redington. Redington had six dogs, Matt had nine. I knew it would be hard for Matt to win the race, but at that point, I thought he might get second.

Unfortunately, things went wrong. As we were leaving the checkpoint, someone told us they thought they saw Matt’s team headed back to the checkpoint. Matt had to drop a dog—Lion decided he just wasn’t going any further and kept lying down on the trail. After leaving Lion, Phoenix decided she didn’t want to run either, so Matt left her as well. Now he left with a team that was confused. At that point, they were tired, and to make them turn around two times was really hard on morale. It was the right thing to do—carrying a dog would have been worse. But down to a team of seven, Matt’s chances of getting in the top three were done. In the end, Schroeder passed Matt and Matt held on to fourth.

Matt told me later that nothing I could have said about the last leg of the race could have prepared him for how hard it was. He ran up every hill, often pushing the sled to get to the finish. By all measures, Matt ran a fantastic race—running with the guys that won is no easy feat. If things had played out just a little differently, Matt could have won.

“I enjoyed being in the lead for a hot second,” Matt said at the banquet.

Next year, he plans to let me run the Beargrease again. 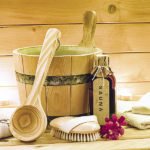 Learning to Work with Wood