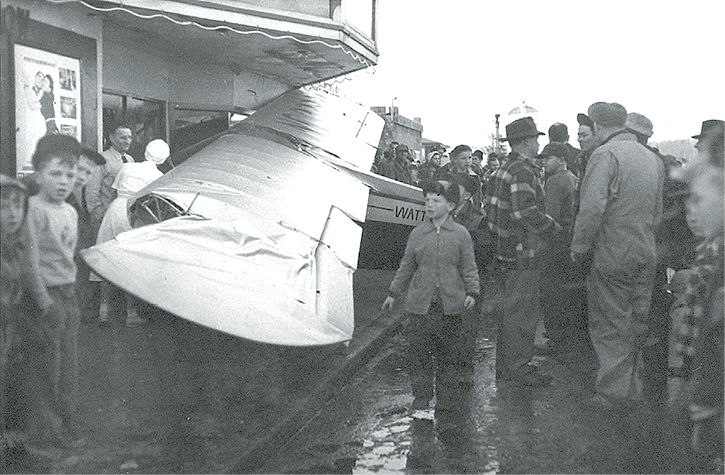 The children waiting for Santa Claus to come to town last Saturday got more excitement than they bargained for.
At 12:30 p.m. the down-town street was cleared of traffic and hundreds of children filled the roped off street. They were looking skyward in anticipation of the plane that would bring jolly old St. Nick. Someone called “there he comes” and cheers arose.
The plane glided easily in the sky, banked, and gracefully settled for the landing. The pilot chose to come in from the East Bay end of the street and planned to land near the coop store and taxi along to Quaife’s Standard Oil Station. It made a perfect landing and came along, but just before reaching the Shore Theater, the plane turned in as if drawn by a magnet. People couldn’t believe it but the plane kept right on, climbed the curb and crashed its nose through the front door of the theater.
For a moment no one moved, and then there was a human flood towards the plane that on one could stem. The pilot and Santa climbed out of the wrecked two place cub, unhurt except for feelings.
Santa went on with his job of distributing candy and popcorn balls. A group of men pushed the damaged plane to the vacant lot across from Toftey’s store.
Willard Waters, owner and pilot of the plane was at a loss to explain what had happened. Then it dawned on him; “it was that tail ski” he said. He lifted the tail of the plane and demonstrated the action of the ski that was controlled by two springs.
“There is no control of this ski from the cockpit,” he explained. “I put it on to act as a brake, but I never anticipated it would act like that.”
He explained that as long as the plane had momentum as it rolled along the street the ski stayed straight, but as the weight settled on the tail ski it evidentially turned sidewise as it struck a rough spot and stayed that way. That steered the plane away from a straight line.
Mr. Waters estimated the damage to the plane to be about $800. And said he would not attempt to repair it. Anyway, no one got hurt and that’s the main thing.
Reprinted with permission from the Cook County Historical Society and Cook County News Herald.
previous post

Pollinators are the subject of license plate contest