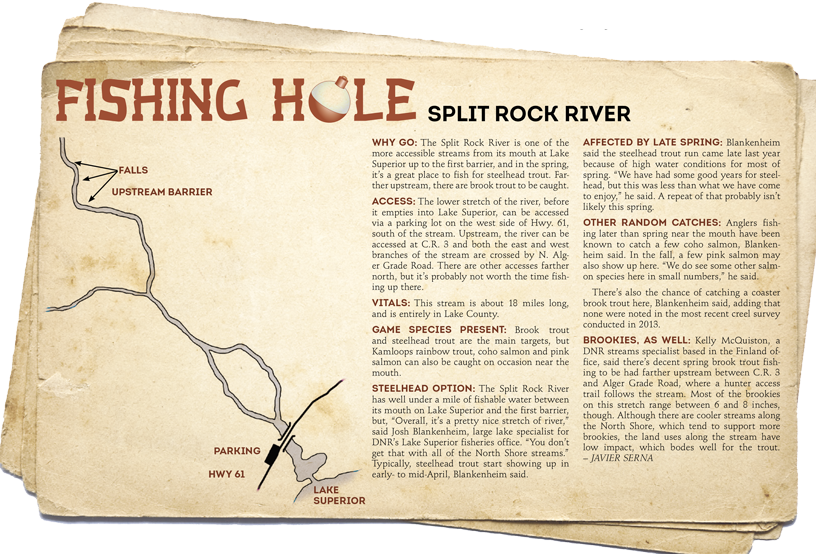 WHY GO: The Split Rock River is one of the more accessible streams from its mouth at Lake Superior up to the first barrier, and in the spring, it’s a great place to fish for steelhead trout. Farther upstream, there are brook trout to be caught.

ACCESS: The lower stretch of the river, before it empties into Lake Superior, can be accessed via a parking lot on the west side of Hwy. 61, south of the stream. Upstream, the river can be accessed at C.R. 3 and both the east and west branches of the stream are crossed by N. Alger Grade Road. There are other accesses farther north, but it’s probably not worth the time fishing up there.

VITALS: This stream is about 18 miles long, and is entirely in Lake County.
GAME SPECIES PRESENT: Brook trout and steelhead trout are the main targets, but Kamloops rainbow trout, coho salmon and pink salmon can also be caught on occasion near the mouth.

STEELHEAD OPTION: The Split Rock River has well under a mile of fishable water between its mouth on Lake Superior and the first barrier, but, “Overall, it’s a pretty nice stretch of river,” said Josh Blankenheim, large lake specialist for DNR’s Lake Superior fisheries office. “You don’t get that with all of the North Shore streams.” Typically, steelhead trout start showing up in early- to mid-April, Blankenheim said.

AFFECTED BY LATE SPRING: Blankenheim said the steelhead trout run came late last year because of high water conditions for most of spring. “We have had some good years for steelhead, but this was less than what we have come to enjoy,” he said. A repeat of that probably isn’t likely this spring.

OTHER RANDOM CATCHES: Anglers fishing later than spring near the mouth have been known to catch a few coho salmon, Blankenheim said. In the fall, a few pink salmon may also show up here. “We do see some other salmon species here in small numbers,” he said.There’s also the chance of catching a coaster brook trout here, Blankenheim said, adding that none were noted in the most recent creel survey conducted in 2013.

BROOKIES, AS WELL: Kelly McQuiston, a DNR streams specialist based in the Finland office, said there’s decent spring brook trout fishing to be had farther upstream between C.R. 3 and Alger Grade Road, where a hunter access trail follows the stream. Most of the brookies on this stretch range between 6 and 8 inches, though. Although there are cooler streams along the North Shore, which tend to support more brookies, the land uses along the stream have low impact, which bodes well for the trout.— JAVIER SERNA 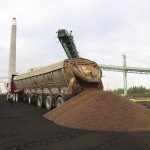 Biomass: Fuel from the Forest 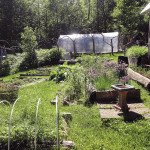 Creative Ideas for the Northern Gardener