Built as a global learning center, the new 8,000-square-foot addition showcases the habitat and history of the Northwoods. Moose, caribou, white-tailed deer and timber wolf mounts are on display, as well as a 10-foot aquarium and terrariums featuring amphibians. Interactive touch screens describe how the species interact with each other, including black bears. Nature sounds lend ambiance from state-of-the-art audio.

“Awesome, is the word we hear most,” said Lynn Rogers, bear biologist and leader of the center, of those who have toured the new facility. “We hear excitement in their voices and see their wide-eyed enthusiasm. It’s no wonder because we’ve had experts from across the country to make this ecology center a world-class place.”

The ecology hall also houses the Hope Learning Center, a classroom with broadcast technology. The center is named after Hope, the bear cub whose mother, Lily, gave birth to in January 2010. Hope’s birth was an Internet sensation as people around the world watched on a live web cam.

Since 1994, Rogers has wanted to build an ecology museum celebrating the Boundary Waters. Combined with the bear center, a dream of honoring the Northwoods’ wildlife and landscape is now a reality.

“The worldwide attention we’re seeing is fantastic,” Ely Mayor Chuck Novak said. “People are excited about the bear center expansion. It’s a big boost to our economy having visitors here from all over the world.”

The mission of the non-profit North American Bear Center is to advance the long-term survival of bears worldwide, by replacing misconceptions with scientific facts about bears, their role in ecosystems, and their relations with humans. Founded by Dr. Lynn Rogers, the NABC opened in May 2007.

The NABC is located at 1926 State Highway 169, a mile west of Ely. For admission fees, please call or visit www.bear.org. 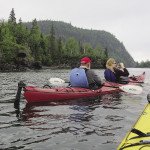