Vehicle collisions with wild animals can happen at any time of year, but fall is when most collisions with deer occur. That’s when deer (and moose) breed, and hormonally charged males often abandon their natural caution as they pursue females.

Driving slower (especially at night) when in rural areas can help prevent accidents, but if you do hit an animal, it’s important to know what to do.

Historically, when deer numbers were lower, hitting a deer with a vehicle was a big deal. However, these days it is so commonplace that drivers are less inclined to salvage the deer.

“With deer, the motoring public has gotten to the point of hitting deer and moving on,” said Lieutenant Dan Thomasen, District 6 area supervisor. “Quite often, people are concerned about insurance reporting. The picking up of deer statutorily falls to the road authority.”

Minnesota Statue 97A.502 (b) states, “The driver of a motor vehicle that has collided with and killed a deer on a public road has priority for a possession permit for the entire deer if the facts indicate that the deer was not taken illegally.”

However, Thomasen notes that since the Covid-19 pandemic, there has been increased interest in salvaging road-killed deer, even during spring when deer are run down from trying to survive winter: a time when salvage rates are ordinarily low.

“If somebody hits a deer, they get first right of refusal,” Thomasen said. “To a large extent, in moose country, we’ve kind of extended that to moose. If somebody hits a moose, we’re probably going to give it to them.”

However, Thomasen notes that if it looks like the animal was hit intentionally, the driver will be denied possession.

If you hit a moose (or even if you weren’t the driver, but observe a road-killed moose) Thomasen urges you to report it.

“It’s an animal of enough significance that we’ve always worked really hard to make sure they get utilized,” Thomasen said. “Individual officers know people who have expressed interest in a moose. We’ve tried to do a good job of extending that to tribal folks as well.”

“Over the last two to three years, we’ve seen an increase in moose that are hit and left along the road and are never reported,” Thomasen continued. “If that happens during the warm-weather months and it’s been sitting there eight to 12 hours, that meat is no good anymore. If people would just call, we do everything we can to make sure moose are utilized.”

Most collisions with moose happen at night. That’s when moose are active, and their large, dark bodies are hard to see in the dark. Thomasen said although many people are interested in taking a moose if the driver who killed it doesn’t want it, finding a home for it at night can be difficult.

“We get a lot of calls from people who want a moose, but when you call them at midnight, suddenly, they don’t want them,” Thomasen said.

If you hit an animal with your vehicle, first check on the health of you and your passengers, and try to get safely off the road. Then call 911. The dispatcher will be able to route your call to the local sheriff’s department or state patrol. Thomasen said the sheriff’s department has the authority to issue a possession tag for a deer and can write a report for your insurance agent. However, if you’ve hit a moose or bear, the DNR will have to issue the permit.

Use common sense if an accident happens.

“If they hit a deer and it’s dead and in the middle of the road, it’s probably beneficial to the next person to move it,” Thomasen said.

You may hit an animal without killing it. The humanitarian thing to do would be to put a badly injured animal out of its misery if you have the means, especially if an officer can’t make it to the scene quickly—be sure to clear it with the officer before you attempt to dispatch the animal.

If the animal looks sick (sick before it was injured by the collision) Thomasen said the officer will likely keep the animal and give it to the state for research.

If you hit a wolf, you won’t get the animal.

“Wolves are back under federal protection,” Thomasen said. “If they hit one with their car, they aren’t going to get to keep it.” If a wolf is hit, the DNR will pick it up and likely give it to the Fish and Wildlife Service.

Thomasen said he often gets calls from people who want to salvage the antlers from a road-killed buck. He said the possession tag is for the entire animal, not just the antlers, and the person receiving the permit should salvage the entire carcass.

Across the border, the rules are similar in Ontario. If you hit a large mammal, such as a deer, moose or bear, you’ll need to register it with a Notice of Possession, which allows you to keep the dead wild animal for personal use. You must keep the Confirmation of Registration for as long as you possess the animal. Special rules apply for threatened or endangered species. You need to register deer, moose, bears and wolves (among other species) if you wish to possess them.

Further information on how to register road-killed animals in Ontario can be found at: ontario.ca/page/keep-dead-wild-animal. 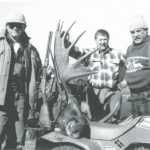 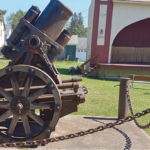