North Shore—On a sunny, summer day in the Northwoods, it’s a delight to hear the clear voice of a white-throated sparrow sing “Oh sweet Canada, Canada, Canada” beside a sparkling lake. This summer, with the celebration of Canada’s sesquicentennial, I expect that those patriotic sparrows will sing even more incessantly than usual.

They aren’t wrong either—about Canada being sweet. Its hardwood forests produced a record 13.5 million gallons of maple syrup in 2016, which amounts to approximately 70 percent of the world’s maple syrup. Quebec’s maple forests may be lovely, but I have to admit that they’re not my favorite.

The rocky, mossy, damp boreal forests have won my heart, and the hearts of white-throated sparrows, Canada warblers and 300 other species of birds that rely on these extensive ecosystems to breed. The way to one’s heart is through the stomach, after all, and the boreal forest provides a banquet of blackflies, mosquitoes and caterpillars for harried parents to feed their hungry chicks.

Below the evergreen canopy, underneath the cacophony of birdsong, just above the lakeshore, and among the buzzing mosquito clouds, patches of white flowers crouch modestly. Don’t let them fool you. Cornus canadensis, aka Canada dogwood or bunchberry, is one of the fastest plants on Earth. We’ll get to that in a minute.

The four large, silky, white “petals” that glow in dim light are hard to miss. They aren’t petals, though; they are modified leaves that gently cup a cluster of itty bitty flowers. Each blossom in the bunch has four creamy white petals of their own, and it’s worth getting on your hands and knees to see them.

While the pollen is not yet mature, the four petals bend securely inward, with just a thin spike jutting upward from the tip of one petal. It is the trigger. The petals press firmly downward on the stamens, keeping them restrained. When the pollen is ready, any unsuspecting insect that bumps the petal’s hair trigger will initiate a launch to rival NASA’s.

When the petals spring open, the stalk (filament) of the stamen releases elastic energy and straightens upward in an arch. The pollen-loaded anther on the end follows the arch, but rotates just enough to fling the pollen so that it can reach maximum vertical speed. This action takes less time than a bullet needs to travel the length of a rifle barrel.

The result is that the pollen experiences 2,400 times the acceleration of gravity; 800 times the acceleration that the Space Shuttle does during liftoff; and is launched more than 10 times the height of the flower. From this lofty altitude of 2.5 centimeters, the pollen can be picked up by the wind. Or the soaring pollen might smack into the bee who triggered the launch and travel to a different flower that way. While the effort may seem extreme, bunchberries cannot self-pollinate, so this out-crossing is necessary to produce seeds and fruit.

When looking closely at a cluster of bunchberry flowers, you can tell which ones have opened. The closed buds are either pale green or white. Once triggered, the petals arch back to reveal a dark, reddish-brown style at the center.

If you’re not impressed by the bunchberry’s blooming or pollinating, have you ever eaten the fruit? The late-summer clusters of crimson are just as pretty as the flowers (see top photo), and they have a mildly sweet flavor, slightly gelatinous texture, and the pleasant crunch of one or two small seeds.

The leaves are also particularly beautiful in the fall. The plants spread through underground rhizomes, and sprout up in patches of four-leaved clones. Depending on conditions, most, some, or none of the plants will develop two more leaves (making six total) and a flower cluster. As the autumn tree canopy changes color, the bunchberry develops lovely maroon veins and eventually turns entirely deep red.

How patriotic for the bunchberry flower to be both white and red in multiple ways; how appropriate for this boreal gem to be named after Canada. 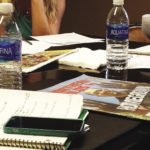 The writers are coming: OWAA Conference