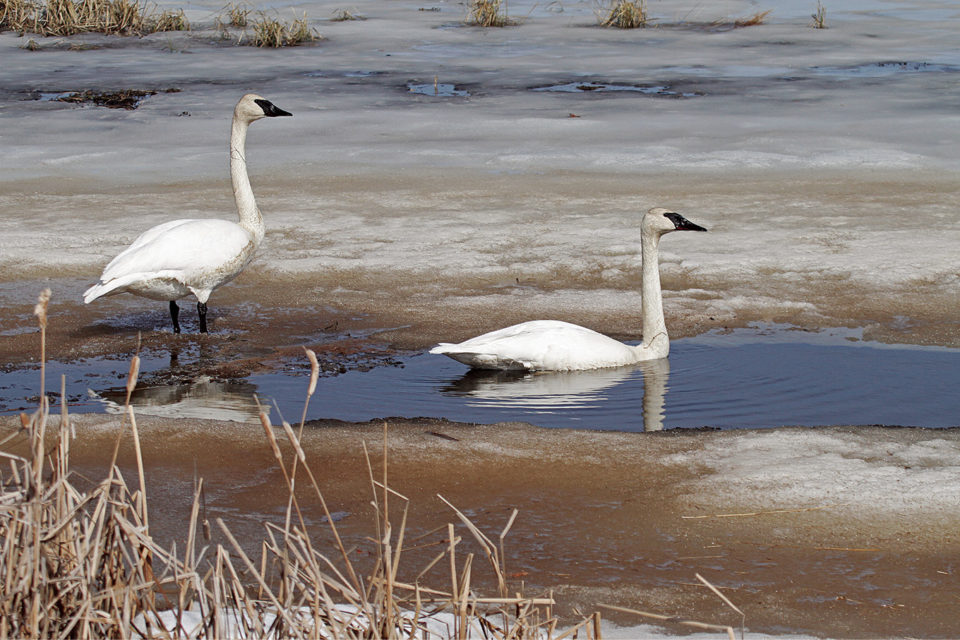 Trumpeter swan pairs often return even before the ice goes out in order to defend their breeding territory from interlopers. | MICHAEL FURTMAN

March is one of those in-between months. Some years, March is still winter. Other years, it’s our first breath of spring. In all years, it’s a transition month for bird life. Winter birds are leaving, some summer birds are arriving, and year-round birds are preparing for the breeding season. Here’s a key for what to watch for.

Northern Wilds country may seem quite “north” to us, but in fact, a lot of birds from even further north migrate to our region during winter, and the list can be pretty long depending upon the year. It’s often the food supply further north that dictates whether we see a lot of these winter birds or only a few.

Come March, any northern owls that have wintered here will begin to disappear—great gray, snowy, boreal and northern hawk owls—each feeling the urge to get home for their nesting season. These owls tend to set up a temporary territory when they visit our region in winter. They become part of our neighborhood, like seasonal cabin owners. When they depart in March, it will happen suddenly, and the woods or fields where you regularly spotted them will seem sadly empty. Of course, there are always exceptions to the March departure. The latest I’ve photographed a snowy owl in our area was at the end of April.

Finches—redpolls, pine siskins, crossbills and pine grosbeaks—are another group that tend to depart in March. So too will the busy flocks of bohemian waxwings that have been gobbling fruit from our trees all winter, winging their way north. In order to catch a last glimpse of these species before they vanish, pay attention to trickles of melt water. They relish that first drink and bath after a long winter.

Like the departing owls, these birds aren’t leaving because they’ve stripped our region of food, but because they need to migrate back to their breeding grounds further north.

If it saddens us that these winter birds are vanishing, the month of March means that our seasonal resident birds start to arrive. It is a trickle at first, usually led by bald eagles, especially the breeding adults. They return early in order to defend their territories and to make any needed nest repairs.

Where there is open water—usually just rivers at this time of year—early ducks appear. Typically, the first to arrive are common and hooded mergansers, bufflehead and common goldeneyes. It’s also not unusual to see mallards as well, as they are one of the earliest nesting species of duck. As March gives way to April, virtually all of the puddle and diving ducks appear. Courtship flights are common this time of year, during which a single hen will lead a flock of drakes through a rigorous and sinuous flight. Throughout these flights, a female duck evaluates the males for fitness, one of her tools for selecting a mate. In the duck world, hens do all the choosing.

Now that trumpeter swans seem to be nesting on just about every body of water in our area, you’ll often find them actually arriving before ice out, and spot them standing on “their” pond. A highly territorial species like the bald eagle, mated pairs return in plenty of time to ensure no interlopers invade their nesting place. Canada geese also arrive, some to stay and nest, others destined for a more northerly region.

It will be a long time before we see the majority of song bird species arrive, but in March it’s possible that the first robin will appear, and you’ll probably note an increase in blue jay numbers. Crow numbers will also increase, and when they do, they’ll mob the remaining northern owls mercilessly, perhaps a factor in the owls’ departure timing.

Of course, we don’t have to mourn the departure of northern birds, or be overly anxious for the arrival of our summer birds, because we’re fortunate to have a variety of species that stick with us all year. We may start to consider them “ordinary” since we see them so frequently, but there’s nothing ordinary about them.

Consider that by March, the Canada jay (formerly the gray jay) is already nesting, and in fact could be well along in incubation. This hardy, friendly jay of the boreal forest nests in conifers, and in the southern edge of their range (our area) their naked, helpless young may actually hatch before the end of the month. Talk about a tough chick.

Black-capped chickadees at this time will be seeking a nest site, usually a hole pecked into rotted wood of a tree by the pair. They’ll lay their eggs in April. The less often seen boreal chickadee is following a similar timeline. In March, if you are very fortunate, you might see their courtship, which is similar in both species. Males chase females in a looping, descending flight. If she’s interested, she’ll land and beg for food like a young bird by quivering her wings. If the male feeds her, the deal is sealed!

March is when our woodpeckers really ratchet up their drumming. All species common to our area begin to stake out territories and seek mates, which is the purpose of their “rap.” They are also more vocal at this time. Ravens, which have formed groups during the winter, now separate into their monogamous pairs to head back to their nesting territories.

Speaking of drumming, March is the time that ruffed grouse will slowly start to display. While the peak of activity for drumming is in late April or early May, warm weather and longer days can get males fired up in March. The same is true for spruce grouse. While they don’t drum, they do have a flutter display, and like the ruffed grouse, will strut with their tails spread and wings dragging like tiny tom turkeys. Hens of both species, though, are far less prone to rush things, and much to the chagrin of the displaying males, ignore their advances until later in the spring.

Transition; that’s March in a nutshell. Winter one day, spring another, and everything in between. And it’s the same with March birds. 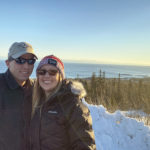 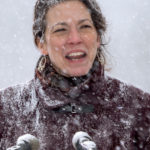