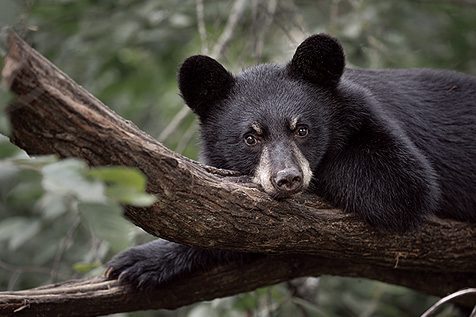 The Vince Shute Wildlife Sanctuary in Orr, Minnesota, is a 500-acre sanctuary where you can observe black bears in their natural habitat. | ILYA RASKIN

Dust, winds and waters. Bears and people. All swirl together on an August afternoon at the Vince Shute Wildlife Sanctuary in Orr, Minnesota. A dry spell has turned dirt roads into arid trackways. Hints of autumn’s cool breezes blow from the north. Stealing beneath jackets, they run chill fingers up spines.

The 500-acre sanctuary, where you can observe black bears in their natural habitat, is some 50 miles from the Canadian border, as the bear roams. In a summer season there, staff members see 300 to 400 different bears. Last August, Ilya Raskin and I visited the sanctuary, a rare place for bears.

Biologists call late summer hyperphagia season, the time when black bears go into an overeating frenzy to build up their fat reserves before hibernating for the winter. Acorns and other bear treats, such as raspberries, are at their peak in the northern forest then; for female bears, successfully having cubs in spring depends on finding enough to eat the previous summer and fall.

Bears may spend 20 hours a day foraging, consuming 15,000 to 20,000 kilocalories in a 24-hour period, scientists have discovered. The weight a bear gains is regulated by the fat reserves it accumulates—once those reserves reach an adequate level, a biofeedback mechanism returns the bear’s appetite to normal.

Inside the Magic Circle

From May through August, more than 80 bears at one time frequent the sanctuary. They forage for food in an open meadow surrounded by northern spruce-tamarack, or boreal, forest. The meadow is referred to as the Magic Circle; there the bears nose around in hollow logs laden with nuts and berries left by sanctuary staff members.

“We’re continuing a tradition of feeding bears that started decades ago,” says Stephanie Horner, Vince Shute Sanctuary director for the 2021 season. “We don’t suggest others do it, however.” Black bears in the wilderness are just that: wild.

Decades ago, Horner explains, “logger Vince Shute, who has now passed on, lived in this clearing.” Shute and fellow loggers once shot bears that came into their camps looking for food. Then they realized: to stop break-ins at the cabins, all they had to do was share their food, especially if it was berries or nuts. From that time, loggers and bears lived side-by-side. Eventually the logging camp closed, and in 1995 the land was formally dedicated to the bears under the auspices of the American Bear Association and its Vince Shute Wildlife Sanctuary.

“This past spring [2021], we had to hit the ground running,” says Horner. “The bears showed up a month or more early, in April.” Cheeky, the sanctuary’s dominant male, was among the first to appear. Bears lose 30 to 50 percent of their weight during hibernation, “so it’s common for them to arrive looking quite lean,” Horner says. But Cheeky was far from starving. “In November and December of 2020, there was an unusual warm-up followed by an early spring,” says Horner. “That likely made a lot of the bears’ natural foods available longer in the fall and/or earlier in the spring.”

On summer afternoons and evenings, the public is invited to visit the sanctuary to watch bears like Cheeky. The Magic Circle is visible from a raised, 25-foot-high boardwalk. Bears and cubs often climb trees inches from the platform, paying little attention to gawking human onlookers. Last year, the sanctuary hosted more than 17,000 human visitors.

“People learn that bears follow their own path, whether to food or another bear or a den,” says Horner. “Unless we provoke them, bears are not all that interested in what we’re doing.”

As if to make the point, an adult bear passes within feet of a group of human sanctuary visitors. The bear ambles along an old logging road over a bridge, making its way to a small pond. Slipping quietly into the water, it swims for a few minutes then emerges, shaking like a wet dog. People are largely ignored throughout.

“Bears are made of the same dust as we; they breathe the same winds, and drink of the same waters.”—Naturalist John Muir

In the Magic Circle’s center, a bear named Jasper is holding court. At age 22, he’s one of the sanctuary’s longest-lived bears. The oldest is Peanut, who turned 31 last January. The sanctuary’s matriarch, her favorite food is peanuts-in-the-shell. “Peanut is old for a wild black bear,” says Horner. “Black bears can live into their 30s, but their life expectancy is closer to 15 to 20 years.” Although Peanut has slowed down with age, Horner says that “she’s still as feisty as ever with bears of all ages and sizes who get too close to her food.”

Outside the Magic Circle

On the other end of the sanctuary bears’ age spectrum is a yearling named Bean. Bean was separated from her mother in May, 2020. Vince Shute staff members reconstructed and insulated a den to increase Bean’s likelihood of survival. Ultimately, however, she opted for other housing. “She may have left the sanctuary with another mom and her cubs,” says Horner. “She had spent a lot of time foraging with them. Adoption in wild black bears is not uncommon, so we were hopeful she would be taken care of.”

Staff members were amazed to see Bean return in May, 2021, “looking healthier than ever,” says Horner. “She came by herself and was plump for a yearling. We saw her in her favorite tree for a few weeks in May and then again for a few weeks in July, but she didn’t spend a significant amount of time at the sanctuary.” Bears, Horner says, “never cease to amaze us. It seems that a bear that was orphaned would rely more on our food and spend time in the safety of our trees, in a place that was familiar to her. But for whatever reason, that was not the case.”

It’s possible, says Horner, that although Bean’s time with her mom in 2020 was short, it was enough to learn where to find food outside the Magic Circle, in the wild.

To discover where Vince Shute bears go when they’re not at the sanctuary, biologists at the Minnesota Department of Natural Resources (DNR) placed tracking collars on six bears there from 2016 through 2019. “Generally, the bears stayed near the sanctuary most of the summer, but a few traveled long distances to den in the fall, much like other bears in Minnesota,” says Andy Tri, the DNR’s black bear biologist.

“However, the bears we collared at the sanctuary had home range sizes that were a fraction of the home ranges of bears collared outside the sanctuary.” The easy availability of food at Vince Shute may be an explanation.

Minnesota is home to more black bears than anywhere in the U.S. but Alaska—some 12,000 to 15,000. Someday it may be much easier for the bears to find food, the result of a shifting climate.

Minnesota’s woods are slowly changing, says Lee Frelich, a forest ecologist at the University of Minnesota. Stands of spruce trees are turning into deciduous woodlands. Increasing numbers of native deer and invasive European earthworms are moving in, preventing the growth of spruce and other coniferous tree seedlings. Deer browse on saplings, and earthworms change the soil so it’s inhospitable to far-northern trees.

In the Russian roulette of climate change, black bears may be big winners. As oak trees take root farther north, more acorns, a bear favorite, may be available. “If spruce-tamarack forests become mature oak woodlands that produce acorns,” says Tri, “that would be a net gain of bear food.”

Like us, for good or otherwise, bears, even those at Vince Shute, won’t escape the changes wrought by an altered climate.

Bears and other North Woods mammals, including humans, are made of the same dust, breathe the same winds, drink of the same waters.

A Black Bear and You in the Forest

Bear attacks on humans rarely happen, biologists have found. It’s a very unusual situation that would lead a black bear to go after a human, according to Tri.

Never run from a bear. Running triggers an attack response. “It’s an invitation to play tag,” writes Dave Taylor in Black Bears: A Natural History, “and you can’t outrun a bear.”

Always face the bear. Most bears are averse to head-on confrontations. Talk to the bear quietly. Let a bear know you are there. A calm, even tone works best.

Back up slowly, but always keep your eyes on the bear. Black bears, studies have found, much prefer flight to fight. If a black bear thinks you are far enough away for it to run into the forest, it will vanish from sight. 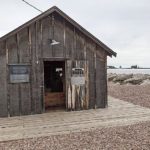 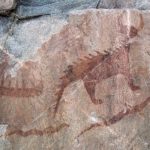 Award-winning science journalist and ecologist Cheryl Lyn Dybas, a Fellow of the International League of Conservation Writers, brings a passion for wildlife and conservation to Northern Wilds, Natural History, National Geographic, National Wildlife, BBC Wildlife, Yankee, Scientific American and many other publications, and is a Field Editor at Ocean Geographic. Eye-to-eye with the wild is her favorite place to be.