Acting in what some would call the nick of time, the Ontario government recently used a helicopter to capture woodland caribou from Lake Superior’s Michipicoten Island, where they are being wiped out by wolves (as previously reported in this column) that arrived there about five years ago. Eight females and one male were moved to the Slate Islands, which have long supported caribou. Wolf predation had reduced the Slate Island population to about four bull caribou. Wolves are now absent from the archipelago. It is hoped the released caribou will breed and repopulate the islands. Aside from a handful of animals along the lake’s northern shore, these are the only remaining native Lake Superior caribou.

Reporting on the above paragraph in this column, preventing the extirpation of Lake Superior caribou seemed like a no-brainer to me. Moving the animals to a wolf-free island was an achievable goal and, as recently as a decade ago, a significant, if not substantial population existed on some islands and along the shore. Historically, woodland caribou were the deer species populating much of the Lake Superior watershed. Maintaining this native species and the ecosystem’s biodiversity seemed the right thing to do. I was surprised to discover not everyone agreed.

My story, and those of others, were posted on Facebook, where they attracted an array of comments. Most folks were happy the translocation occurred. A few, however, thought it was a waste of government money, while others opined that the government should kill wolves. On the other end of the spectrum were those who believed we should not intervene and “let Nature take its course.” Three simple solutions; none of which would produce a future for Lake Superior’s caribou. But let’s take a closer look at each one, because they are the sort of knee-jerk reactions people often have to the management of wildlife and wild places.

The idea that actions to benefit wildlife are a waste of government money seems to have more traction in recent years, especially among folks who believe that government can’t do anything right. For critics, government is an easy target, because it is public and political. That said, our wildlife resources are held in public trust, which means we rely on government for the stewardship of those resources. In general, various levels of government do a pretty good job of wildlife stewardship. As for wasting money, wildlife management is but a tiny sliver of the government funding pie. And that sliver has shrunk considerably during the past two decades. Funding for work beyond the management of game species, which is largely provided by hunting license fees and related excise taxes, is hard to come by.

What about killing wolves to protect caribou or other prey species? Well, it seems that if there is a wolf in the neighborhood, someone will always suggest killing it to solve whatever problems, real or imagined, faced by caribou…or moose…or deer…or elk. In the simplest terms, killing wolves or other predators will reduce predation, but not for long. Unless predator control is ruthless and relentless, as it was 100 years ago when wolves were nearly wiped out across the Lower 48, it isn’t long before the remaining predators produce new litter of young. Then the predation continues. As is demonstrated with many furbearers, it is possible to have a long-term sustainable harvest of predators including wolves. In doing so, you must accept a sustainable level of predation on game species.

The other aspect of killing wolves that cannot be ignored is that doing so is not socially palatable for lots of folks. Call them “wolf-huggers” if you will, but many people feel an affinity for the wildest of canines. Nor are all of these wolf-huggers city slickers or ignorant about Nature. They are simply people who think a world with wolves is better than one without.

More troubling to me than wolf haters or wolf lovers are those who look at a situation such as the certain demise of caribou trapped on an island with wolves and say we should let Nature take its course. In this instance, predators would eat up their prey and then likely starve. If there were other caribou populations, perhaps we could let this occur (it may happen, anyway). In this case, we’d extirpate a species that has existed here for thousands of years. That strikes me as an ignorant view of Nature.

More to the point, if Teddy Roosevelt had decided to just let Nature take its course, there wouldn’t be much left of Nature today. Instead, Roosevelt saw a North American landscape that had been ravaged by human greed and set in motion a conservation movement to protect wild places and restore what we can of our landscape and its wildlife. The importance of Roosevelt’s actions cannot be overstated.

Sure, humans can meddle with Nature and have disastrous consequences. The introduction of common carp is a good example. Past efforts to wipe out predators and thus create a game paradise is another. But by and large, our work to fulfill the vision of Roosevelt and other early conservationists has been a resounding success. Many folks don’t realize that just a century ago, many common wildlife species were barely hanging on as scattered, remnant populations. Elk, wild turkeys, pronghorn antelope, Canada geese, trumpeter swans and even white-tailed deer thrive with an abundance that would have been unimaginable 100 years ago. Even once-despised predators such as wolves and grizzly bears have been restored to significant portions of their original range.

The problem with simply shrugging our shoulders and relying on Nature to take its course and resolve our conservation challenges is that doing so overlooks human nature. Very often, managing wildlife is mostly about managing people and their actions. Roosevelt’s creation of national parks, wildlife refuges and other protected landscapes did not invoke universal applause. Very often, TR’s actions stopped the indiscriminate destruction of land and wildlife by a greedy few. In the absence of proactive conservation of natural resources, human nature nearly always prevails. 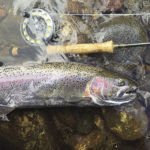 All About Fly Fishing