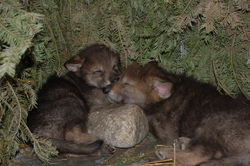 A team of experts will simulate wolf den conditions with 24-hour daily care for three weeks to help the pups adjust to their surroundings. Since the pups will always live in captivity, they will be socialized to human contact so they are at ease with visitors and veterinary care.

The pups will be presented in public programs at the interpretive facility until they join the adult wolves in early August.

“While the wolf is steeped in myth and is such a reclusive predator, ambassador wolves help the center forge a connection between people and the animal,” said Wolf Center executive director Marc Anderson. “These wolves open the door to understanding, debunk myths, and offer visitors a chance to witness an elusive predator they would not likely see in the wild.”

Wolf Center visitors can observe the wolf pups in person. The pups can also be seen via a 24-hour Web cam at www.wolf.org.

On May 31, the pups had a visit from Hollywood actress Amber Tamblyn, who has been a Wolf Center member, and a supporter of wolves and their survival, for 14 years

Tamblyn recently completed shooting a remake of the 1950s film Beyond a Reasonable Doubt, and will soon be seen in Sisterhood of the Traveling Pants 2 with her dad, Russ Tamblyn, who is known for his role as Jets gang leader Riff in the film version of West Side Story. 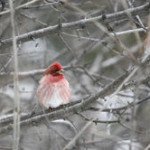