GRAND MARAIS—Just about everyone living on the North Shore understands that the arts have a significant impact on the local economy. A new economic report released by Creative MN demonstrates just how significant the arts economy has become. For the seven northeastern Minnesota counties served by Arrowhead Regional Arts Council, the arts have a total economic impact of $40 million.

The arts received a tremendous boost from the 2008 passage of the Clean Water, Land and Legacy Amendment to the Minnesota Constitution, which increased the state sales tax by 3/8 of one percent, with the revenues dedicated to: protect drinking water sources; to protect, enhance, and restore wetlands, prairies, forests, and fish, game, and wildlife habitat; to preserve arts and cultural heritage; to support parks and trails; and to protect, enhance, and restore lakes, rivers, streams, and groundwater.

The Arts and Cultural Heritage Fund receives 19.75 percent of the Legacy Fund revenues, which are distributed via grants and other means to arts organizations throughout the state. About 10 organizations in Cook County receive Legacy funding, and the money is making a difference.

“Since the passage of the Legacy Amendment, art funding for the Arrowhead region has tripled,” says Sheila Smith, executive director of Minnesota Citizens for the Arts.

In Grand Marais, Smith says legacy funding has played a role in the growth of the Grand Marais Art Colony and the North House Folk School. In fact, a consortium of local organizations has commissioned Smith to do an arts economic study for Cook County, which will be available in October.

Statewide, the growth in the arts has been tremendous. In 2006, before the Legacy Amendment was passed, the arts economy was worth $838 million. Today it is worth $1.2 billion, which Smith says is double Wisconsin’s arts economy, 10 times that of Kansas and 12 times that of South Dakota.

“We are the bright shining light of the prairie where the arts are concerned,” says Smith.

Minnesota’s dominance is being noticed by artists in other states. Anecdotal evidence suggests they are moving here to find work, something Smith hopes to quantify with a future study. Minnesota, for instance, has five times the average rate of employment in the publishing industry, making it number one in the country. Also, as is evident in Grand Marais, arts organizations provide local employment.

The arts also attract tourists who attend events, take classes and shop in galleries. Then they eat in local restaurants, shop in stores and stay overnight.

“You get all of these people coming from out of town and leaving money behind,” Smith says.

Along the North Shore, that’s the name of the game. 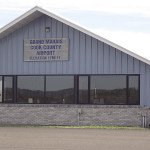 A longer, wider runway for the Grand Marais Airport