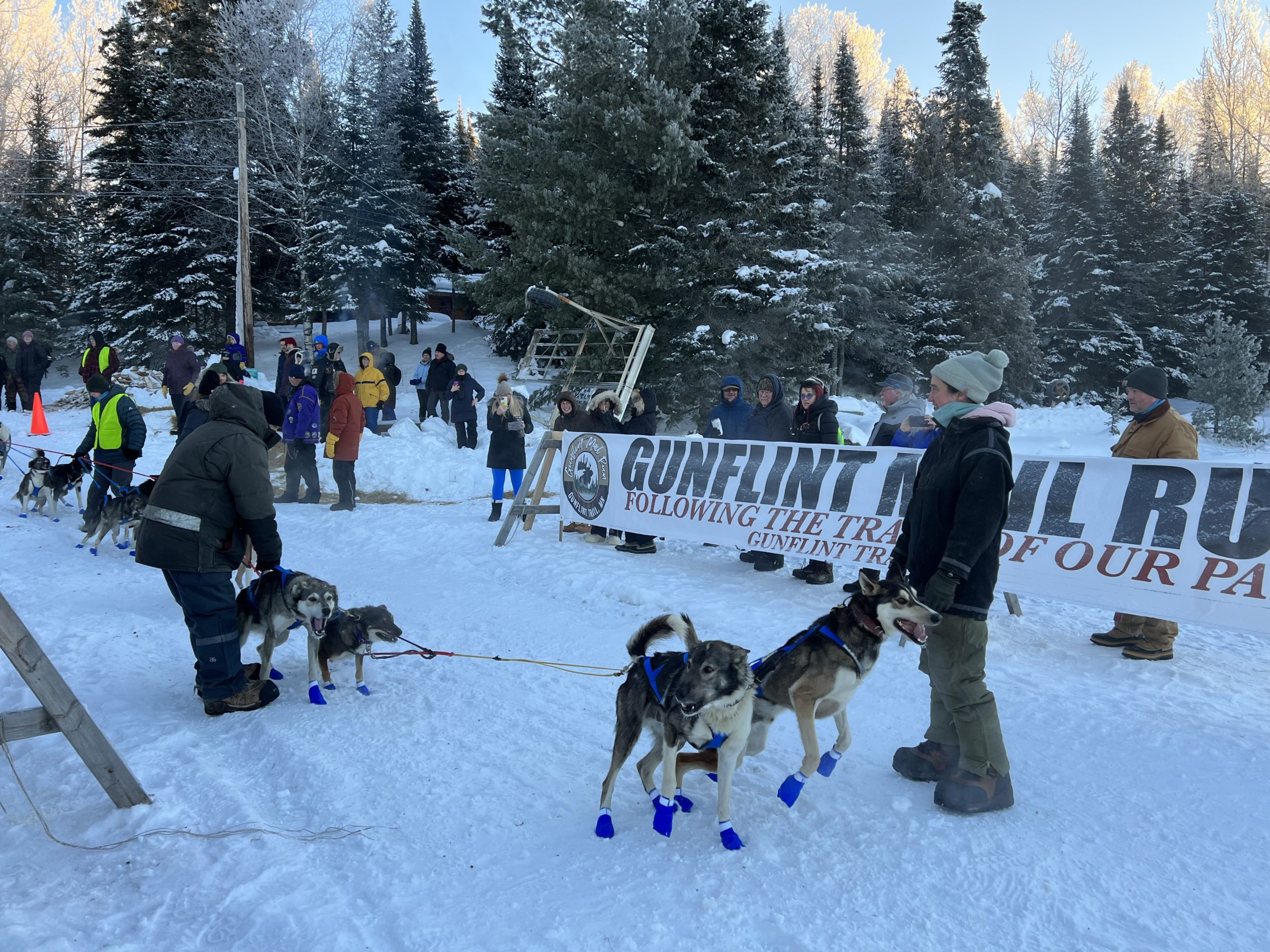 Erin helps Matt's team at the start of the race before leaving on her first leg. | VICKI SCHMIDT

For three days during the Christmas blizzard of 2022, the wind kept up a steady blow, moving snow everywhere, taking down trees, blowing anything loose, helter skelter. People lost their garbage cans and found new ones. On day two, Matt took out the snowmobile, groomed the trail and cut some trees from the path.

The pattern in December was a consistent dump of snow every few days, which necessitated grooming trails, and then running dogs—and because the snowfalls were so much and the grooming so time consuming, our runs were further between than we wanted, thus necessitating a run in the blizzard. I loaded the chainsaw in the sled, just in case, and dressed for the blizzard—all my thickest winter gear and goggles, complete with a headlamp (it would be dark in an hour)—and went out.

The run was going well, we completed one 13-mile loop to the campground and went back for another. By then it was dark and sometimes the wind gusted so hard, the dogs would all look around, scouting for the culprit of this onslaught of weather. Three miles from home, the dogs stopped suddenly and my headlight shone on a large tree across the trail. I threw in the hook, walked up with the chainsaw and prepared to cut. The dogs are no fan of the chainsaw and several times I had to keep the leaders from running the opposite direction, but soon, I moved the tree off the trail, whereby the dogs pulled the hook and the sled came hurtling toward me. In a desperate attempt to grab the sled, I dropped the chainsaw.

We kept on and within another half mile found a large tree over the trail. I had no chainsaw at this point. I walked up to see what could be done and began breaking branches off the main trunk that was about waist high. With the branches off, I was able to heave the dogs over the tree. As the sled approached, I tried to place a snowhook on the tree but as the sled went over the top, the hook popped and off went the team.

I sent Matt a flurry of desperate messages as I trudged down the trail to the sound of trees cracking. This night ended with a 2-mile run for me. Matt found the dogs on the trail, the sled on its side caught in the snow. He ditched the snowmobile he had gone out on and ran the team home. All was well, but the next morning, he found a tree had landed on the snowmobile. My run had backfired, but we now had blizzard training checked off for the year.

Matt had the 12-dog team with two A-leaders, Temper and Keith, and the majority of dogs that will run on his Beargrease team. He was the defending champ and feeling very confident. After the first leg, he had an eight-minute lead. My mother-in-law, Vicki, said upon hearing of Matt’s lead, “I know now that it’s not over ‘til it’s over,” referring to our many ups and downs in racing.

I had an eight-dog team with one very solid leader and two less solid leaders. Still, we had a great first leg. The sun came up to reveal a forest covered in hoarfrost that sparkled in the light. The trail was hard-packed and fast. The passing kept things exciting.

Still, I was only in eighth place after the first run. So, I resigned myself to simply finishing strong. On the second leg, the teams left with a time that calculated their first run time plus a three-hour rest and a differential, which makes all the teams have a true finish. This also meant I left on the heels of another team—about 20 seconds between us. I didn’t overtake that team though, just held back as we coasted down Poplar Lake and kept them in sight up ahead. My team was acting a little wonky—not a lot of drive, some distracted dogs.

About 8 or 9 miles from the start I passed two eight-dog teams head on. It was 16 miles to the eight-dog turn around, so I was surprised to see these teams that had only left 20 minutes ahead of me. I thought to myself that they are really having great runs and had clinched first and second place. I cheered them on. Within another mile as I approached a team to pass, we came upon two more teams in the trail, barking dogs and a race official. The official told us there was water on the trail ahead. We could cross the water and keep racing or turn back and end our race.

I hooked down, left my team and trudged to scope the water, which was at the bottom of a sharp hill and covered the entire width of the trail, a dark slushy overflowing creek about 10-15 feet from one side to the other. I watched as the first team navigated across, the musher up to his thighs in water. Turning to another musher I said, “yep it’s bad, what are you going to do?” I offered to help other teams get through. I would lead their dogs. After some hemming and hawing, the first one took me up on the offer. She ended up pulling her leaders while I waded in and kept dogs from tangling in the branches. Two more teams went through in a similar manner and then Matt’s team was next. I waved him down the hill.

Matt didn’t stop, “Ahead! Ahead!” he called to Temper and Keith and in front of me they flew down the hill and charged into the water, pulling the team through to the far side and clawing their way up the bank. A few dogs balked and I gave their harnesses a tug, but soon Matt was coasting through on the runners of his sled.

Ah, that’s the way to do it, I thought, running up the hill to retrieve my team. I pulled my hook noting that Stevie had done away with her neckline and also Mikey’s next to her. We charged down the hill and through the water. Somehow my feet, even after pulling four teams through before me, were not wet.

Our “break” on the trail, and the water crossing, gave the team a little spring to their step and we moved along nicely for some time. I was still behind four teams that had crossed at this point, but after making the turn around and heading back towards the water crossing, I began to realize that now was my chance to race. I didn’t have to stop and help other teams through this time. I charged through the water again, and it wasn’t smooth. One dog took a real deep dunk, but we quickly pulled through, they shook off, and away we went. I had passed two teams by then. Eventually we came to another and passed. Now dark, I occasionally saw headlamps ahead and behind. My leader Pinto wasn’t running fast at all, in fact, he kept backing off, almost pulling Itsy backward. I kept calling them up, whistling, telling them we could maybe win. Nothing. Finally, I hooked down and ran up, intending to switch out Pinto. I found the snaps that hold the dog to the gangline were so iced up there was nothing I could do in any kind of timely manner. Pinto would stay where he was.

By the time we hit Poplar Lake, I was in second place. I could see two teams on the lake (one was a team that had turned around at the water hole and so they were no longer racing). One of these teams veered off into a bay of the lake, well off trail. I didn’t really know who was who out there. I passed the other team and cruised toward the finish. Our dogs have always liked running on the lake. By now the moon had risen, full and gold. The stars shone. I turned off my headlamp and listened to the sound of dog paws on snow, sled runners gliding and thumping over occasional bumps in the ice. What a glorious evening.

At the finish line, I was told I had won. I had taken a chance on the water and it certainly paid off. Matt only increased his lead in his race. Friends began calling it the Sawtooth sweep.

I’m not one to boast about winning. In fact, this hardly felt like a win for some days. But sometimes you have to take the good things when they come, so I’ll languish in this feel-good moment a bit longer. 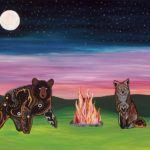