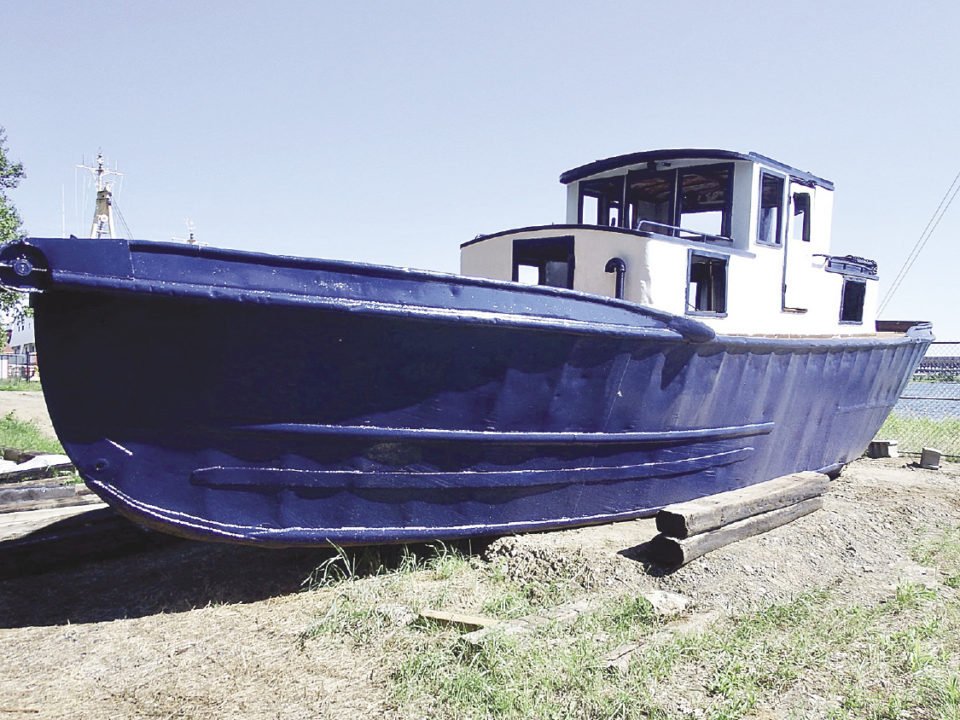 The Dryden 3 is a new static display at the Lakehead Transportation Museum’s waterfront site. To get the tug to the site, Tower Light Limited and the G. Lorenston crew donated their time and equipment. | DONNA BROWN PHOTOGRAPHY

What does one do with a rusty derelict tugboat—once an important working warping tug hauling log booms on rivers and lakes—sitting in your yard? Thunder Bay’s Sandy Smith, owner of Garden Lake Timber, had such a tug, the Dryden 3, sitting on his property in the Mount Baldy area. So, what did he do?

He offered to donate the historic artifact to the non-profit Lakehead Transportation Museum (LTM) in Thunder Bay which gladly accepted the tug and made plans to restore and add it as a new static display near their museum ship, the former Canadian Coast Guard icebreaker the Alexander Henry which was built in Thunder Bay. To get the tug to the museum site, Tower Light Limited and the G. Lorenston crew generously donated their time and equipment including a flatbed trailer and crane to pick up, transport and lift into place the tug at the LTM’s waterfront site.

Logging had a vital role in the economic development of communities in Northwestern Ontario and northern Minnesota. Tugboats towed and hauled log booms of logs down rivers and lakes to paper mills. And one of the tugs used by the paper mill in Dryden, Ontario was the Steelcraft warping tug, Dryden 3, one of five tugs that up until 1981 were used to haul log booms to Dryden. The Dryden 3 tug was built at Owen Sound in 1947 by Russel Brothers Limited, a steel boat builder that started in Fort Frances, Ontario in 1907 before moving to Owen Sound in 1937—it ceased operation in 1994.

“They built some very different and very tough boats back then,” said Rob Farrow of the LTM tug restoration crew, author and featured as “Outdoor Rob” on YouTube Channel. “Designed to push or pull logs and log booms down slow-flowing rivers and lakes, the Dryden 3 carried a large winch that held 5/8-inch cable about a mile in length. It could go ahead and drop its 450-pound anchor and then go back and hook up to a large boom that corralled the logs. It would then winch itself forward pulling the log boom with it. This was part of the river drive to get the trees from the forest to the local mills.”

Farrow feels it’s important for people to see and learn a bit of the history of the log drives.

“The process of getting the logs to the paper mills employed a lot of people back then and was the staple of industry that brought us to where we are now,” he says.

In May, once the Dryden 3 was on the LTM site, the museum’s volunteer restoration crew (Farrow, Matt Carlson, Mike Wolowich and Reiner Fisker) set to work, including painting the tug in blue and white special paint.

“The Dryden 3 has seen better years and would require a ton of work to get it seaworthy again, but for a static display for all to see, she is perfect,” said Farrow. “The hull is in decent condition but the cabins are rusting badly. In order to slow the decay, some scraping and painting was required. We scraped the hull and the cabins the best we could and applied marine grade paint which will last longer than normal paint in the elements. The crew is in the process of cleaning and painting the interior. She still has the winch but is minus an engine. We would like to put the side winder wheel, which was used to wind the cable on to the drum evenly, onto the main wheel stand since the steering wheel disappeared many years ago. The deck still needs to be painted and we’ve reset the cabin into place, since it had been loosely put back in.”

Two additional historical artifacts for outside static displays on the grass boulevard have been recently donated to LTM: a decommissioned 9.5-foot (6 m) Bell-Buoy transported and set by crane on site by the Canadian Coast Guard icebreaker Samuel J. Risley and a German-built lifeboat from the lake freighter Cartierdoc of the former N.M. Paterson & Sons fleet.

The red-and-white steel buoy and bell, anchored by heavy chain to a 10-ton block of concrete, was used as an aid to navigation on the Great Lakes. The buoy on display was the same type that the Alexander Henry would have handled and set in the lakes during its operational days.

The other new ‘old’ artifact—the German-built lifeboat from the Cartierdoc—received a makeover of new paint (white and orange) and lettering. The ship was built in Hamburg, West Germany and launched in 1959 as the Ems Ore. Acquired by Paterson & Sons in 1988, she was renamed Cartierdoc, reconstructed as a 730-foot (222.5 m) lake freighter, sold in 2002 to Canadian Steamship Lines and scrapped in Turkey in 2019.

As for the logging boats like Dryden 3, Farrow says, “These boats are still being scrapped and the numbers dwindling each year, so it is important to save at least a bit of this history.” 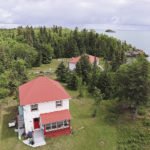 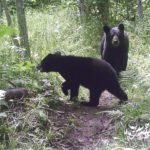