Many Minnesotans own canoes. But rare is the canoer who paddles a birch bark canoe. Rare still are bark canoe builders. Count Talon Stammen of Grand Forks, North Dakota among that rarest breed.

I met Talon, who is a high school senior, last summer when he visited Grand Marais to attend a birch- bark canoe-building class at the North House Folk School. I was impressed with this quiet young man who deeply appreciates Nature and working with his hands. At the time, he intended to spend the rest of the summer at his family’s island retreat at Lake of the Woods, working on his canoe.

Although Talon took instruction from master canoe-builder Eric Simula of Hovland, the North House class was an overview of techniques, rather than building a bark canoe from start to finish. You might say Talon learned just enough to be dangerous.

However, I wasn’t surprised when Talon’s mother, Mary Stammen, recently emailed me photos of Talon paddling his new canoe. He worked on the canoe for about two months and finished it in September. During the process, he learned a lot about canoes and something about native people, too. He was introduced to a native elder who gave him welcome advice and encouragement. 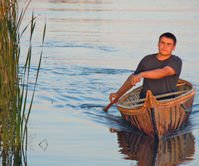 “I don’t think I could have completed the canoe without his help,” Talon told me in a telephone interview. “He was very helpful with finding the right kind of birch bark.”

Gathering and preparing the necessary natural materials to build a canoe is the most time-consuming part of the construction process. Talon started with birch bark, because it was near the end of the peak season for doing so. A friend suggested he contact a native elder who was familiar with traditional crafts. He helped Talon obtain permission to harvest bark on the local reservation.

Talon says the natives have different words to describe birch trees, depending upon how the tree is used. What he needed was a canoe birch, a tree with a very straight trunk and thick bark. His native friend marked three places on a map where he could find such a tree. With that help, Talon found the perfect birch.

After harvesting the bark, he scraped away the cambium to reach the inner bark. Then he rolled the bark and soaked it so it would be flexible and supple when it was time to use it. The bark roll was stored beneath some shady cedars on his family’s property to prevent it from drying out.

Next he harvested white cedar, the primary wood used for the ribs, sheathing, head board and gunnels. For the thwarts and pegs—the latter used in place of nails—he harvested ash. From a swamp he collected watap, the roots of black spruce and tamarack used as lashing. The pitch used to seal the seams came from a white spruce.

“The pitch can get really sticky. I had it all over me for days,” Talon said. “I was also told it makes the best chewing gum, but I’m still picking it from my teeth.”

The canoe was built on the ground, beneath the same cedars where he stored the roll of bark. He started by laying out the bark and then making the building frame, which he held in place with over 400 pounds of smooth, flat stones. The bark was pulled up around the frame and held in place with stakes. Then he lashed the gunwales to the bark.

He used a beaver tooth to cut the thwarts and lashed and pegged them into place. Thwarts and ribs were shaped with boiling water. After they were heated, Talon bent the ribs into shape with his knee.

“I broke a half dozen of them before I got the feel of it,” he said.

The rib get smaller going from stem to stern and overlap like fish scales. Each rib is fitted and tapped into place beneath the gunwales. More boiling water is used to stretch the bark until the ribs are in place. The seams were coated with spruce pitch and the remaining cambium scraped from the bark. The nearly completed canoe was placed in the water to find leaks, then sealed with more pitch.

“I really can’t compare it to a regular canoe, because the shape and materials are so different,” he says. “It’s so buoyant it sits right on top of the water.”

Talon hopes to put his new canoe to use in traditional ways, such as harvesting wild rice and netting whitefish. He’s also preparing materials to make a long bow, snowshoe frames and perhaps a second canoe. He plans to learn how to tan hides and is getting a raw bison hide from a North Dakota bison farm. He wants to learn about trapping, too. While he appreciates the old ways, the young man doesn’t live in the past.

“I’m not against technology. I want to become a physician.” he says. “I just feel that when I’m in a wilderness environment, I want to use the skills of working with my hands and be in more in touch with the environment.”

Whatever the future holds for Talon, those skills will serve him well.

Points North: It’s All About the Dog