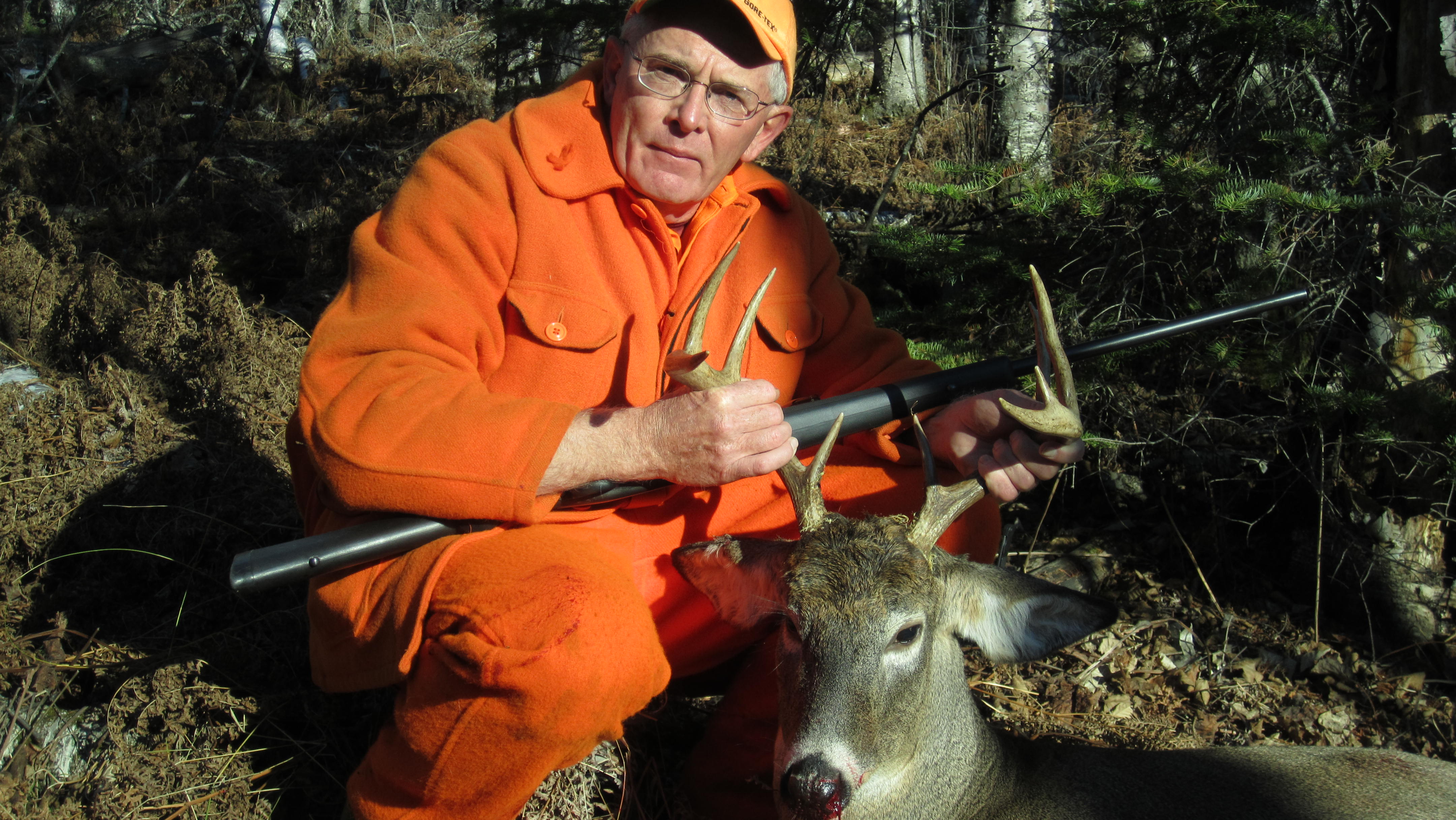 The author killed this buck while still-hunting on the North Shore.

Opening weekend of the Minnesota firearm deer season had a couple of change-ups this year. For starters, we decided to forgo our usual opening day hotspot, because it wasn’t so hot the last three or four years. Seeking a change in fortune, we opted for another place that is an old standby.

On opening morning, a hunter orange shadow followed me into the woods. After hearing a hunting tale or two (or maybe more), my friend Kate decided she wanted find out more deer hunting.

“Maybe you’ll be my lucky charm,” I said via email.

“If our past fishing experiences are indicative, we’re in for a long day,” she replied.

Enduring readers may recall Kate helped me run down a wind-tossed portable shelter on a Boundary Waters lake last winter. Our successful capture of said house proved to be the catch of the day and, dare I say, the most memorable moment of our fishing excursions thus far. Hopefully, a day in the deer woods would end our unlucky streak. Or as they say, hope blooms eternal.

We started out at daybreak. Mostly following my advice, Kate was dressed for a day in the deer woods, with layers of warm clothing covered with a hunter orange jacket and hat. I asked if she would be warm enough.

And if she wasn’t fine later on, I’d never hear of it. Four of us walked nearly a mile into the woods before we started hunting. Grandson Joe went one way, friend Al went another. Kate followed me. We were sneaking through the woods, so she had a few instructions. Walk quietly, keep extra movement to a minimum and if you see or hear something, let me know about it with a whisper.

The forest floor was soaked and silent from recent rains. Northwest breezes accompanied an arriving cold front. It was unlikely we’d hear a deer before seeing it. I worried the cold front would stifle deer movement.  My hunting strategy was simple. We’d sneak for a while and then sit. Then we’d sneak again.

And so went the day. We sneaked. Then we sat until we were chilled. Then we’d sneak again. The wind continued to blow. Occasionally, one or both of us would hear something that might be a deer walking on wet leaves. I’d tried to lure it with a bleat call. Nothing ever appeared. It was one of those days when nothing was moving; not ravens, not chickadees, not even red squirrels. It was after 8 a.m. when I heard the first, faint gunshot. Kate, who , as previously noted, tends toward pessimism regarding fishing and hunting success, blamed herself our utter lack of luck.

“You didn’t just jinx me, you jinxed the entire forest,” I said.

We kept hunting. Touching in with our companions via walkie talkie, we learned Al had seen three deer, including a spike buck. I explained that even though the spiker was legal game, Al was very unlikely to shoot it. I am not sure my explanation of why he would hold out for an older buck because it was a more challenging quarry made sense to a woman who rightly believes hunting is a way to get something to eat.

Kate stuck it out all day, intently looking and listening for deer, although she admitted to “zoning out” a time or two. Late in the afternoon, she mentioned she was chilly, though she wanted to keep hunting. We met the boys at the trucks at sunset.

“If you had been hunting with me, I would have shot the spiker so you’d get the full hunting experience,” said Al.

Yeah, right Al. Sure you would have.

As the truck heater warmed the cab on the drive home, Kate mentioned she was starting to thaw out. But she hadn’t let the cold spoil her day in the woods or mine. And we agreed that it had been a fun day.

The next morning the wind was down and the woods were quiet. The boys and I jumped two deer before we split up to hunt. Less than an hour later, a deer approached within a few feet of me on the far side of a dense blow down. I heard its approach, saw a glimpse of a brown body and a flash of white followed by the thump of hooves hitting the earth, and then nothing more.

An hour later, I ran into Joe. We talked quietly for a minute or two and went our separate ways. I walked about 75 yards to put some distance between us and then paused. Just then, the buck I was looking for stepped into the open 30 yards away. When it walked behind a balsam tree, I raised the gun and got ready.  As the buck came back into view, I fired. I shot it again to cease its struggles. And that was it.

On reflection, it was a perfect buck; one of the rare times in the north woods when a buck presents an easy shot. Had Kate been along, she would have seen it all. On further reflection, perhaps it was best that she didn’t. Anyway, I made a phone call after I got home.

“You got a deer, didn’t you?” she said upon answering.

“You just got buck-dialed,” I replied.

Even though it didn’t happen on Saturday, I owe this deer to my lucky charm. Out in the deer woods, Lady Luck always arrives on her own schedule.

All I Want for Christmas