The Civilian Conservation Corps was created during the Great Depression to provide work for legions of unemployed young men. Men enrolled in the program were sent to camps administered by the Army, often in rural areas, where they worked on projects for soil and water conservation, forestry and enhancements to state and national parks. The CCC lasted from 1933 to 1942. During that span of time Minnesota had 148 camps with 77,000 workers.

A remarkable number of CCC camps were located on the North Shore and throughout northeastern Minnesota. Their work created lasting legacies for everyone who enjoys the outdoors. You can happen upon red pine plantations marked with mossy, wooden signs indicating they were planted by the CCC. But the most visible fruits of their efforts are the wonderful stone and log structures they built in state parks.

Paul Sundberg, the retired manager of Gooseberry State Park and freelance outdoor photographer, said that over 80 stone and log structures and other objects such as drinking fountains and picnic tables in the park were built by the CCC. The park has a self-guided legacy tour so visitors can see and appreciate their works. There is even a statue dedicated to CCC workers in the park.

Especially notable at Gooseberry is the stonework. Two Italian stonemasons, John Berini and Joe Cattaneo, directed the crews who built many of the buildings. The stones are multicolored. The dark stone came from a quarry near East Beaver Bay and the red rocks came from a quarry near the College of St. Scholastica in Duluth. Sand for the mortar came from Flood Bay east of Two Harbors. The logs for the buildings were cut in Cascade State Park. At the time, the area around Gooseberry had been logged around the turn of the century by the Nestor Logging Company.

The crowning achievement was the 300-foot “castle in the park,” a wall that is just visible from the highway on the west side of the Gooseberry River bridge. The immensity of the “castle” can only be appreciated by walking through the park. Sundberg said the young men on the CCC crews used to like to sit on the wall with fishing rods. Tourists would ask what they were catching and the young men would string them along with fish stories. It wasn’t until the tourists peered over the wall that they realized there was nothing but dry ground far below. Sundberg said a more lasting example of the CCC crews’ humor can be found on the back side of a building that is no longer in use, where they carved the face of a Martian in the stone.

According to the Minnesota Historical Society, “The CCC/Rustic Style historic resources at Gooseberry Falls State Park are exceptionally significant for their remarkable stone construction. The intricate designs use imaginative combinations of red, blue, brown and black granite. This stonework is the most visually distinctive masonry construction in the state park system. The park’s landscape design is one of the most extensive and comprehensive state park designs from the period, involving professionals from the Minnesota Central Design Office as well as consulting landscape architects.” 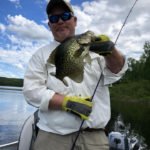